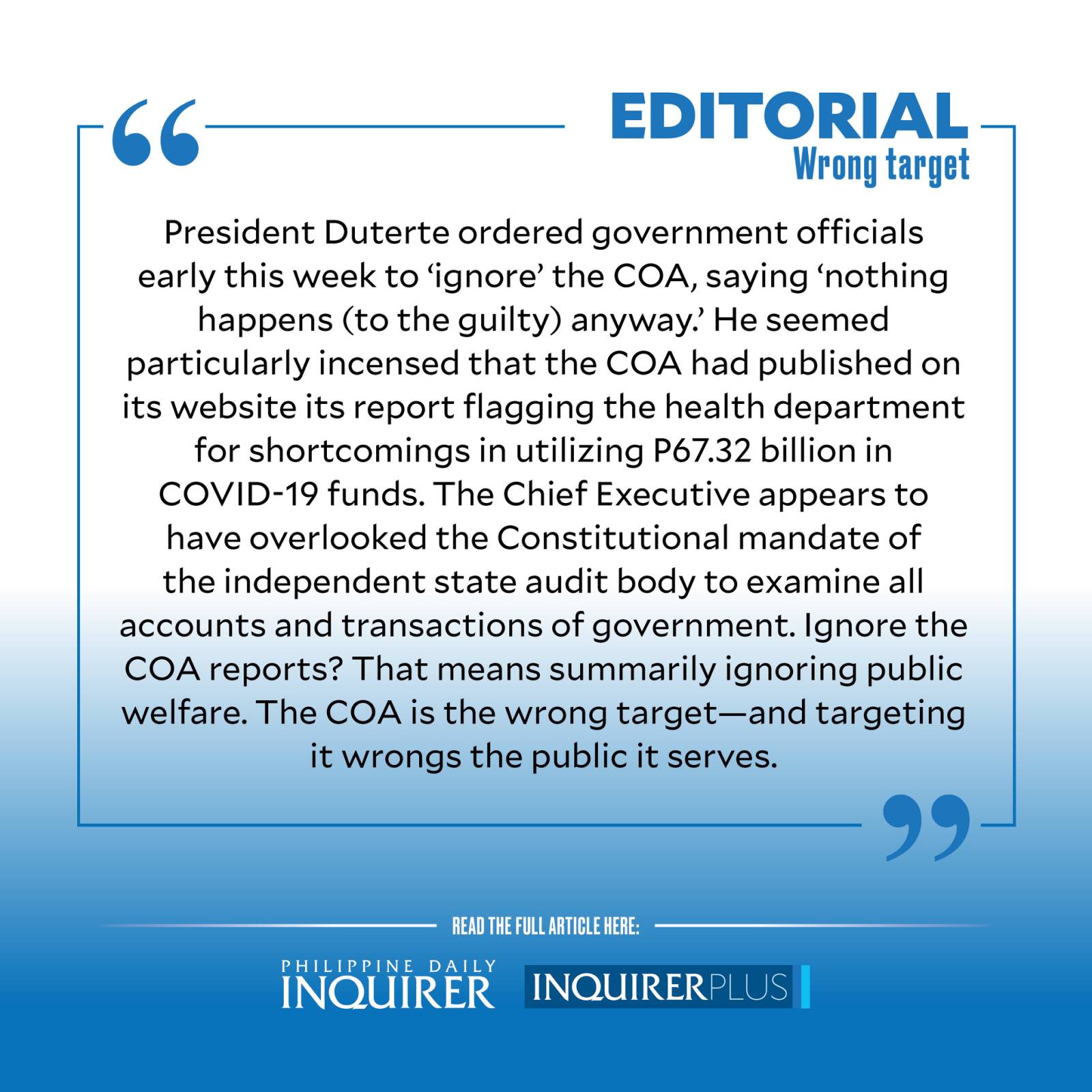 Four high-end laptops costing P700,000 or about P175,000 each (now canceled after swift public scorn). Over P95 million of expired or expiring medicines. More than P11 billion that could have gone to the promised hazard pay of health workers, which remains undistributed. All these in one department alone—the Department of Health (DOH).

How about a P10.83-million “infinity pool” at the Philippine Ports Authority’s training center in La Union? Overpriced sanitary napkins that the Overseas Workers Welfare Administration bought from a construction firm that could not be found in the address listed? Cash aid that the Department of Social Welfare and Development appears to have disbursed to the wrong recipients? Some P160 million that Tesda transferred to the anti-insurgency task force without “proper authority,” thus the warning that it “may be a ground for technical malversation of public funds?”

These are but a sampling of the “deficiencies” and irregularities in the use of public funds and resources by several government offices that were recently flagged by the Commission on Audit (COA).

You’d think such diligent housekeeping by an agency tasked precisely to sniff out possible misuse of taxpayer money would earn points with a President who, at the start of his term, had declared that he wouldn’t tolerate corruption, not even a “whiff” of it.

Instead, President Duterte ordered government officials early this week to “ignore” the COA, saying “nothing happens (to the guilty) anyway.” He seemed particularly incensed that the COA had published on its website its report flagging the health department for shortcomings in utilizing P67.32 billion in COVID-19 funds.

“Stop that flagging, God damn it… Do not publish it, because it will condemn the agency or the person that you are flagging,” raged Mr. Duterte in his TV address on Monday. The President’s appeal to fairness and due process would have resonated—if only he and his administration were as careful and scrupulous when it came to publicly flogging choice targets with unfounded accusations.

The Chief Executive, in any case, seems to have overlooked the Constitutional mandate of the independent state audit body to examine all accounts and transactions of government. Countering Malacañang’s contention that the reports are “premature,” COA chair Michael Aguinaldo explained that such reports “are a requirement by law that has to come out usually by June 30 of every year” and there are “constant meetings” and an exit conference between the agencies and the COA on the audit findings. As the Integrated Bar of the Philippines pointed out in its statement on the issue, “The COA’s report by itself bears no malice and is actually based on the government’s own records or the lack of it.” The sloppy record-keeping (to say the least) of some government offices now scrambling to produce the required documentation is entirely their fault, not COA’s.

This is not the first time the President has attacked the COA for doing its job. In September 2018, Mr. Duterte said the resident auditor of Ilocos Norte should be “pushed down the stairs” for making it difficult for then Ilocos Gov. Imee Marcos to access cash advances for her typhoon-hit province. In January 2019, the President quipped that local officials should “kidnap and torture” government auditors.

This time, aside from castigating the COA, Mr. Duterte used the pandemic emergency to justify the red flags that have seemingly overrun the bureaucracy under his watch. But should the COA stop doing its sworn duty because of the health crisis—when the same has not stopped the administration from enforcing, say, its

anti-insurgency campaign and its “war on drugs?”

The national health emergency, in fact, should have compelled government agencies to be more exacting in the use of resources entrusted to them. The DOH, for one, has billions of unused pandemic funds, including P11 billion supposedly for the hazard pay of medical frontliners who risk their lives taking care of COVID-19 cases. Health workers are now threatening mass resignations unless they get their due, and who can blame them?

The Department of Information and Communications Technology, meanwhile, failed to spend P5.8 billion of its 2020 budget, including P2.94 billion for improving internet connectivity in the country, “especially in this time of pandemic… when most employees are working at home and students are attending classes online.”

Similarly, the COA noted the Department of Education’s “deficiencies” in utilizing funds amounting to P8.136 billion, resulting in, among others, the “flawed, incomplete, delayed production and delivery of learning modules.”

Ignore the COA reports? That means summarily ignoring public welfare. The COA is the wrong target—and targeting it wrongs the public it serves.