The 2020 audit report by the Commission on Audit exposing the Department of Health’s “deficiencies” in managing P67.32 billion in pandemic funds, with P11.89 billion unspent as of last year, confirmed once again what the public has been protesting about all this time: the deplorable ineptness and dysfunction of the government’s response to COVID-19.

The news was like a fresh lash on an already prone, much-flogged country. The Philippines was back at “high risk” for the coronavirus, with the national capital and other areas reverting to the strictest quarantine and with not enough funds to cover the cash aid for displaced families. The low vaccine supply meant government vaccination has yet to reach the desired speed and coverage, while the more dangerous Delta variant is believed to be fueling the steep rise in COVID-19 cases. Many hospitals have reached full capacity.

It was as if the country was back to when the pandemic first began. The news that costly DOH missteps had led to what the COA diplomatically called “missed opportunities’’ in the timely and efficient response to the health crisis was thus nothing less than an outrage.

The most glaring issue was the P11.89 billion the DOH had failed to spend by end of 2020—money that was supposed to cover the hazard pay and special risk allowances of health care workers who bore the brunt of the pandemic fight. “It can, thus, be said that these funds that remained idle as at year-end were not translated to much-needed health supplies, equipment and services that could have benefited both the health workers and the general public during the critical times of the pandemic,’’ said the report. 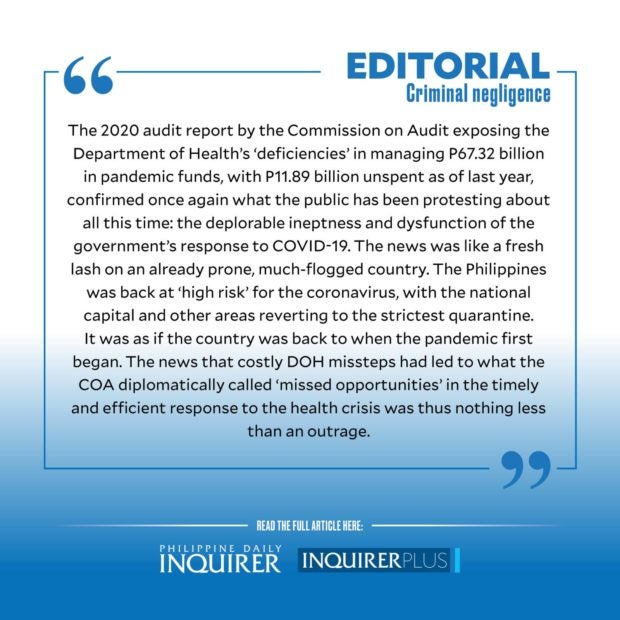 The COA cited some P69.9 million worth of medical equipment and COVID-19 supplies that remained unutilized; P275.9 million cash allowances, gift certificates, and grocery items for personnel that did not have “sufficient’’ legal basis; P1.4 billion of in-kind donations that were not properly accounted for; P24.6 billion unused for public health service; P1.2 billion of undelivered equipment; P3.97 billion in undocumented projects and “doubtful’’ transactions; and P557.7 million in “excessive and unnecessary’’ expenditures, among others.

There were also irregularities seen in the management of P734.503 million in interim reimbursement mechanism funds by public healthcare institutions, sourced from the corruption-plagued Philippine Health Insurance Corporation.

Some P3.4 billion in foreign aid for COVID-19 response was left unused in 2020 because the DOH

dilly-dallied on the projects. More shockingly, P95.15 million worth of medicines were found either expired or soon to expire—a “recurring problem” resulting in

“indiscriminate wastage of government funds and resources,” the COA pointed out.

Health Secretary Francisco Duque III’s response was a blanket denial. The P67.3 billion were all accounted for, he said. “Nothing was stolen and we allocated these funds for our people.”

That statement, however, will not assuage the public, given the DOH’s track record of bungling the pandemic response right from the start.

The government employees’ alliance Courage denounced the DOH’s “grievous betrayal of public trust’’ and called on Duque to resign. Health reform advocate Dr. Tony Leachon put it another way: “What’s the honorable thing to do for failure of leadership?”

The COA later clarified that the report did not say funds were lost to corruption. But the sheer incompetence, distorted priorities, and lack of urgency on display in the face of a punishing national crisis are just as disgraceful and injurious. What to make, for instance, of the DOH’s call for bids to buy four “high-end 2-in-1 laptop with accessories” for the bloated price of P700,000?

The jobs of some 3,000 overseas Filipinos returning to Hong Kong are currently at risk because of the absence of a unified, official vaccination card. That, too, is a job bungled by the DOH. Under Republic Act No. 11525 or the COVID-19 Vaccination Program Act of 2021, the DOH is the main agency tasked with issuing the vaccination cards and coming up with the guidelines.

Perhaps the most disturbing result of the continuing failure of leadership at the DOH is the sense of desperation now afflicting many health care workers. Already pushed to the breaking point by the unrelenting rise in cases, they also endure callous government neglect. Per an ABS-CBN report, a hospital union has warned about the possibility of health care workers going on mass resignation because of the government’s failure to provide their pandemic benefits. “If they no longer have a choice, they will resign. Who will be left to take care of patients?’’ warned Jao Clumia, president of the St. Luke’s Medical Center Employees Association.

Calling these failures “missed opportunities” is the understatement of the year. Criminal negligence is more like it.