How to put surveys to good use 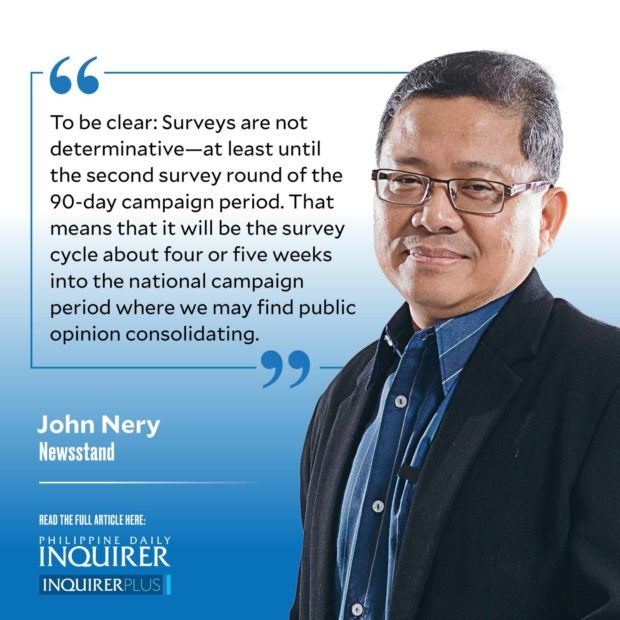 We need to be smart about surveys. I’ve heard people who work in marketing say they don’t believe in surveys because in all their life they’ve never been part of a survey’s random sample. This is basic innumeracy (how many possible sets of 1,800 respondents are there in a population of 110 million?) compounded by demographic ignorance (a marketing executive likely belongs to a sliver of the AB “class,” a random sample of which must be proportional to the actual size of that demographic class).

To be clear: Surveys are not determinative — at least until the second survey round of the 90-day campaign period. That means that it will be the survey cycle about four or five weeks into the national campaign period where we may find public opinion consolidating.

The 2016 elections are instructive: In September 2015, Grace Poe led with 26 percent, in November Rody Duterte with 38, in December Poe and Jojo Binay tied with 26 (with Duterte dropping dramatically to 20 percent because of his cursing of the most popular person in Philippine survey history, Pope Francis). In January 2016, Binay led with 31 percent, in February (just before the campaign period started), Binay remained at the lead with 29 percent, in early March, Poe regained the lead with 27, and then in late March (over a month into the campaign), Duterte was back at the top with 27 percent. He remained the Social Weather Stations (SWS) survey leader until Election Day.

While the trend lines in the 2010 campaign are somewhat different, because Noynoy Aquino was the beneficiary of a genuinely popular draft with his mother’s death in August 2009, his high numbers (much higher than everyone else’s) went steadily down until the campaign period started in earnest. The first survey conducted during the campaign showed Manny Villar only a few points away; but with the second survey, conducted in mid-March, Aquino began pulling away again from Villar, Joseph Estrada, and the others, this time for good.

I share the view that SWS and Pulse Asia are by and large accurate; it is political folly to ignore them. We should treat these two survey groups with proven track records the way President Arroyo treated them in her 2004 election: with great discipline, using their surveys to guide her campaign. (It wasn’t until she was fighting a legitimacy crisis in the wake of the “Hello, Garci” scandal that her otherwise professional officials started badmouthing surveys.)

It is also true that a close race can mean inconclusive or too-close-to-call surveys even until Election Day; the 1992 elections provide proof of that.

What does a smart use of surveys mean, then?

For supporters of Manny Pacquiao, this means tracking his ability to drain votes from Sara Duterte among Mindanao’s 15 million or so voters (as of 2019). For Isko Moreno, it means keeping his Luzon base solid while increasing his support in the Visayas. For Leni Robredo, this means consolidating support in the Bicol region and in Western and possibly Central Visayas, while nursing a slow but steady growth in national numbers (the next threshold is 10 percent) with every survey.

Consider the dzRH survey, conducted in the last week of July. From the looks of it, this was a true scientific survey, with a professional polling organization doing the fieldwork. It reinforces the narrative of inevitability that the Duterte dynasty wants to tell the world: Some 25 percent of the voting population (one out of every four voters) will vote for Sara as president, while 15 percent (roughly one out of every six or seven voters) will support her father if he runs for the vice presidency.

The dzRH survey does not have the same track record as SWS or Pulse Asia, but if it is truly aboveboard, meeting the rigorous requirements of a real survey, then we can study it the way we study the June 2021 Pulse Asia survey — which has the same top line.

Mindful of the difference in actual polling methods used, we cannot directly compare and contrast the dzRH survey of July with the Pulse Asia poll of June. And yet it is still also instructive to read the surveys as snapshots in a series of snapshots taken of the voting landscape. Then it is possible to discern not only current positions, but also possible movements.