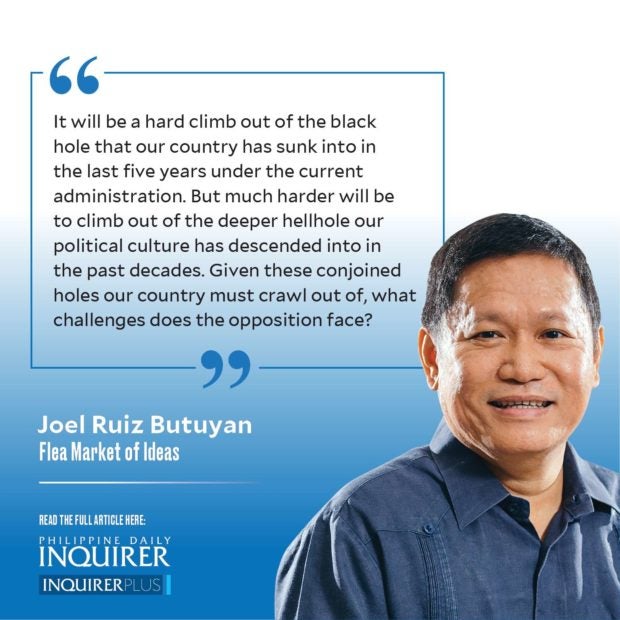 There is more that needs to be said about the looming schism that threatens to scatter the political opposition into splintered factions, thus seriously weakening the chances of winning in next year’s presidential election. These are in addition to what I wrote last week about purists and pragmatists in the ranks of anti-administration forces.

It will be a hard climb out of the black hole that our country has sunk into in the last five years under the current administration. But much harder will be to climb out of the deeper hellhole our political culture has descended into in the past decades. Given these conjoined holes our country must crawl out of, what challenges does the opposition face?

The opposition will face a juggernaut of fair and foul means that will be employed by an administration desperate to retain its grip on power. (We had a foretaste of that in what was done to Manila Mayor Isko Moreno recently.) The ruling administration has all the government resources at its disposal and, no doubt, it will use them to gain an unfair advantage, as all ruling administrations do. The current administration has the additional arsenal of fear to intimidate dissenters and adversaries. There’s also a sizeable number of our countrymen who are misled into believing that it’s in our country’s best interest to continue dwelling inside the black hole. And there remains a vast segment of our society that is immobilized from joining the movement to crawl out of the dark holes because its members are held hostage by economic circumstances.

Faced with these huge challenges, should the opposition limit itself to a few good men with immaculate records to do the fighting for electoral victory in the presidential election next year? Or should it embark on a coalition-building initiative that will include a rainbow of personalities—from the flawless to the flawed—who will be united by the common objective of divesting the Duterte administration of governmental power?

For the opposition to get us out of the black hole the current administration has brought the country into, it needs all hands on deck. That means all personalities, with unblemished and blemished pasts, must exert every effort to come together under the common objective. The opposition comes from a position of weakness, in comparison to its formidable adversary. It will be the height of imprudence if opposition forces think they can capture the presidency by relying entirely on a few saintly forces.

election. In all likelihood, we will need a succession of several presidential leaders in order to gradually transform our political ethos and change the stable of wicked leaders in all our islands. We are daydreaming of a revolution if we agitate hastily.

The opposition is setting the bar unrealistically high if it sets as goals for the election next year the gargantuan objectives of both capturing the presidency and causing the country to leapfrog into a moral paradise. The opposition will be setting itself up for a monumental disappointment.

Our country’s opposition forces can learn lessons from how Israel recently ended Prime Minister Benjamin Netanyahu’s 12 years in power. A loose alliance of political parties from across the political spectrum—including Jewish religious nationalists and an Arab Islamist party, all united by the common goal of ending Netanyahu’s reign—formed a unified coalition to successfully take control of the Israeli government.

Two thousand years ago, an unlikely leader also emerged in Israel at a time when it was under a tyrannical ruler. The leader didn’t limit his invitation to saintly men and women to join in his crusade to fight injustice in his land. He worked with sinners, scoundrels, and scalawags. He went on to change the world.