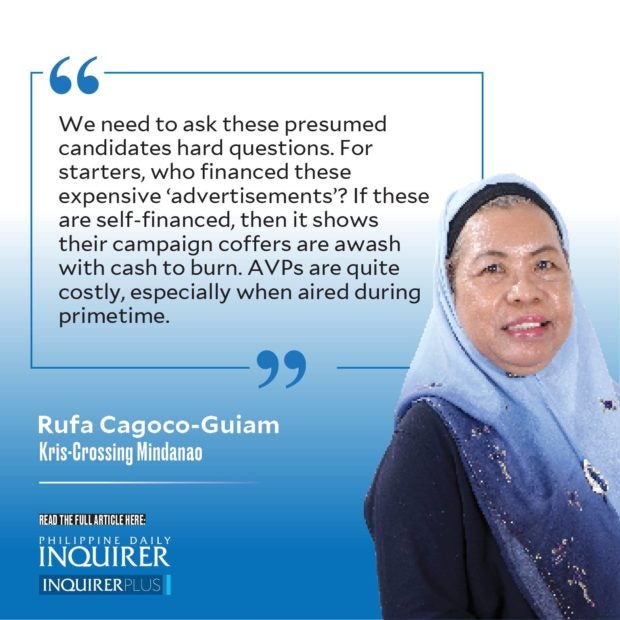 COTABATO CITY— Driving through the long stretch of national highway (189.5 kilometers) from General Santos to Cotabato City lets you go through the boundaries of three provinces: South Cotabato, Sultan Kudarat, and Maguindanao, before you enter the chartered city of Cotabato.

Checkpoints are situated in strategic places along the highway, which are usually near a military or police detachment. But it is not only the ubiquitous checkpoints motorists notice along the highway; there are newly placed “attention catchers” in the form of huge tarpaulins. This new medium of announcing to all and sundry politicians’ aim for national positions started early this year, considering that an election year looms not far away—2022.

Some tarps make blatant claims while others are more subtle in ensuring the longevity of a political dynasty. The latter mainly pushes the presidential daughter to “run, run.” Obviously the main message of the “Run, Sara, Run” campaign is to pass the presidential baton from father to daughter, thus, creating an insidious, odious scenario of a future rule of succession through heredity. Such a scenario sends shivers down many people’s spines, especially those who have worked hard to forge this democracy we are enjoying, however flawed it is.

Tarp messaging is not as powerful as an audio-visual presentation (AVP) of a candidate’s capacities (again, as self-proclaimed, presented in a carefully and creatively curated AVP). Two 30-seconder prime time AVPs on national television networks easily come to mind. One shows this probable presidential bet has already come up with a “solution” to all our problems in governance and other related challenges. It shows a book he has written, purportedly to solve whatever crisis we face as a country. But then, this politician has been a former local chief executive, and a vice president in the past. Is this solution part of his process of self-cleansing from the guilt of not having come up with an effective measure when he was an incumbent official?

Another AVP shows a possible presidential candidate with a compassionate attitude toward the poor, claiming that an assistance of P1,000 is definitely an insufficient “ayuda” for those who have been hit the hardest by lockdowns. He believes that financial assistance of P10,000 should be the amount provided to daily wage earners, skilled workers, and farmers who are unable to earn due to mobility restrictions.

But so many procedural and substantial concerns about cash dole-outs remain. Based on reports, natural and human induced-disasters, and the massive health crisis created by COVID-19 have been the nest of golden eggs for unscrupulous staff and officials of the Department of Social Welfare and Development and other concerned government agencies. They capitalize on skimming off some amount allocated for food packs meant to be distributed to victims of disasters.

We need to ask these presumed candidates hard questions. For starters, who financed these expensive “advertisements”? If these are self-financed, then it shows their campaign coffers are awash with cash to burn. AVPs are quite costly, especially when aired during primetime.

These AVPs and tarpaulins are advertisements, except that they are not marketing a product, but the candidacy of the one featured in them. Advertisements usually create some puffery to sell a product. In product advertisement, some levels of puffing up or making claims about a product can be debated in court under the provisions of Republic Act No. 7394 or the Consumer Act of the Philippines that require “truth in advertising” in order not to mislead consumers about certain products.

But as voters, we need to be adequately warned early about these attempts at early campaigning among politicians who are more willing to squander money on misleading AVPs and tarpaulins than to alleviate the plight of those who have the least in life. Do those who puff themselves up deserve our votes?

EDITORIAL: The politics of Omicron