The return of the Taliban | Inquirer Opinion
Close
menu
search

The return of the Taliban 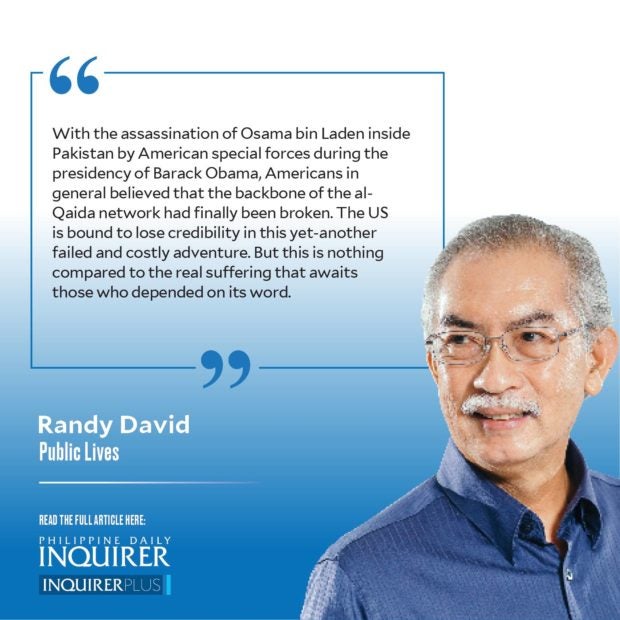 For almost 50 years now, the concern for the safety of Filipinos working in different parts of the world has been our main reason for keeping an eye on global catastrophes. A video call by a local radio or television network to any of our hardworking compatriots abroad would usually give us a sense of what’s happening in any troubled country from a uniquely Filipino perspective.

We are missing this kind of citizen-reportage in the case of the Taliban’s impending military takeover of Afghanistan. I assume there are still hundreds of Filipinos in the national capital of Kabul in the employ of international agencies, private contractors, and development nongovernmental organizations. I imagine them, at this point, deciding whether to go home or to remain at their risky posts, whatever may happen. A number of them are going to be needed to operate the modern machines and decipher the latest office systems that were put in place in the last 20 years by the Western powersʍregardless of who runs the government.

Following the announced mass withdrawal of American and other international troops from Afghanistan, the extremist Islamic group known as the Taliban is poised to reassume political control of this Central Asian country. In just the last few days, Taliban fighters have swept almost unimpeded into the provincial towns and cities surrounding Kabul. Observers expect the Afghan government forces to make a last stand in Kabul, an event that overnight could easily turn this bustling capital into a sea of refugees.

For the Taliban Afghans, the departure of the last American soldier will be celebrated as the final degradation of another empire that has tried to impose its will on their people. It is not for nothing that this mountainous landlocked region is called the graveyard of empires. In the early 20th century, it was Great Britain; in the 1980s, it was the mighty Soviet Union. Today, it is America.

The scenario in Kabul is rapidly shaping up to be a reprise of the frantic airlift of American embassy people and their South Vietnamese staff from the Saigon embassy rooftop in 1975. The prospect of an easy takeover of the capital city by Taliban fighters has so alarmed President Biden that he has ordered the urgent deployment to Kabul of 3,000 US troops to oversee the orderly and safe evacuation of all American civilian personnel and their staff. Apart from this, the US is reduced to hoping the Taliban leaders will keep their word and restrain their fighters so that the lives of ordinary civilians will be spared in the ensuing bloodbath.

But that’s not how the average Afghans see the unfolding situation. They know what it is like to live under the Taliban. From 1995 to 2001, the Islamist Taliban regime held sway over Afghan society, dispensing swift and direct justice according to an extreme version of the Sharia law. The Taliban religious police and administrators were particularly notorious for consigning women and girls to a life of brutal subjugation and ignorance. It is doubtful that the Taliban have mellowed while waiting to take back power.

The US overthrow of the Taliban in 2001 took just over two months. But the war against the underground Taliban and the terrorist networks operating in Afghanistan, particularly along the border with Pakistan, did not stop. It has been America’s longest war. In the last 20 years, the US and its Nato allies have tried to form the semblance of a functioning government backed by US-equipped and Western-trained national army and police. In the process, they also created enclaves of little America that epitomized everything the Talibans denounced as wicked and morally degenerate.

As in any war of this nature, it is those who cooperated with the foreign occupiers or found a secure life under the latter’s protection who most fear the return of the Taliban. Defenseless, they now feel betrayed and abandoned by the great Western powers that promised them emancipation from the cruel rule of a medieval regime.

In October 2001, just a month after the Sept. 11 terrorist attacks on the United States, US President George W. Bush ordered the invasion of Afghanistan to satisfy a deep need for quick retaliation. The US accused the Taliban government of harboring the al-Qaida leaders who were responsible for planning the terrorist attacks. Thus began the US-led global war on terror that has not only defined American foreign policy in the last two decades but, indeed, also transformed everyday life all over the world.

With the assassination of Osama bin Laden inside Pakistan by American special forces during the presidency of Barack Obama, Americans in general believed that the backbone of the al-Qaida network had finally been broken. One of President Biden’s campaign promises was to end this conflict once and for all. In Afghanistan alone, the war had taken the lives of more than 5,000 American soldiers and cost American taxpayers trillions of US dollars.

But, deep down, America’s leaders knew that the Afghan civil war was far from over. After announcing their intent to pull out of the country, the US and Nato invited the leaders of the Taliban to sit down for peace talks in Doha, Qatar. To its dismay, the Afghan government was kept out of these negotiations, presumably as a concession to the Taliban.

The US is bound to lose credibility in this yet-another failed and costly adventure. But this is nothing compared to the real suffering that awaits those who depended on its word.