Modify ‘no vaccine, no work’ ban 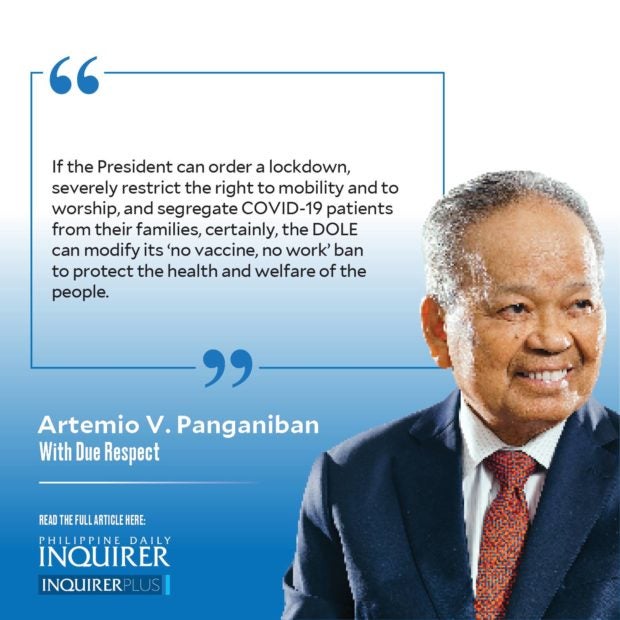 A good friend texted me: “May a private corporation require its employees to be vaccinated? Alternatively, can it require negative RT-PCR tests for those who refuse to be vaccinated à la French President Emmanuel Macron?”

“No” is the simple answer of the Department of Labor and Employment (DOLE). Under an advisory it issued on March 12, 2021, the “no vaccine, no work policy shall not be allowed… any employee who refuses or fails to be vaccinated shall not be discriminated against in terms of tenure, promotion, training, pay, and other benefits, among others, or terminated from employment.”

Also, under Republic Act No. 11525, “vaccine cards shall not be considered as an additional mandatory requirement for educational, employment, and other similar government transactions processes.”

With due respect, this Dole policy should be modified. The ban on the “no vaccine, no work” policy should depend on the kind of work the employee performs, the kind of sanction to be imposed, and the availability of vaccines.

For example, frontliners like doctors, nurses, security guards, fast food dispensers, bank tellers, and toll fee collectors— by the very nature of their work—are extremely exposed to the virus especially the Delta variant.

Obviously, they are, to use a legalese, in clear and present danger of being infected and/or of infecting others. Consequently, for their safety and for the safety of the people they necessarily come in contact with, they should be given the best-known protection—vaccination—thereby saving them from becoming public health risks.

The sanction for the refusal to be vaccinated need not be dismissal from service. It could be work in the backend, work from home, or forced leave of absence. Only in extreme cases of outright disobedience or insubordination defined under the Labor Code may dismissal be resorted to.

Moreover, the employees should be accorded due process. They may have valid reasons for refusing to be jabbed like allergies, comorbidities, or genuine fear of the needle.

I believe RA 11525 yields to “bona fide occupational qualifications” (BFOQ). Vaccination is essential to the occupation of frontliners, in the same way that the obesity of a flight attendant had been held to be a BFOQ in the airline industry, and that the failure to control it can be sanctioned with dismissal “with separation pay as an act of social justice.” (Yrasuegi v. PAL, Nov. 17, 2008).

“There is no law requiring mandatory vaccination,” texted law dean Anna Maria D. Abad, a labor law specialist. However, after having procured enough vaccines for all its employees, the company “should be able to enforce vaccination as a condition to enter its premises…” Verily, the DOLE’s advisory is justified only because the government does not have enough vaccines for all.

I agree with her. Thus, when a company has procured sufficient vaccines for all its employees, the no jab, no work policy should be allowed. At the very least, the alternative Macron solution to bar the entry of the unvaccinated who fail to present credible proof of negative RT-PCR tests can be applied.

The state, I believe, can mandate compulsory vaccination (or the Macron alternative) as has been done recently in California, provided of course it has enough vaccines and facilities to inject them conveniently, safely, and in a timely manner.

Indeed, using its police power to promote the public welfare, the state can restrain and regulate the exercise of the rights to liberty, property, business, profession, and employment. This inherent power is justified by the old legal maxim, “Salus populi est suprema lex” (the welfare of the people is the supreme law). Constitutionally, both the purpose and the means to enforce police power should be reasonable and lawful. Truly, in law as in life, the means never justifies the end.

I do not have space to take up the traditional conflict between police power and constitutional rights. Suffice it to say for now that in the context of the COVID-19 epidemic that has ravaged the economy, impoverished millions, and caused untold misery, illness, and death, I believe the use of police power to mandate vaccinations can be justified under the conditions I discussed.

If the President can order a lockdown, severely restrict the right to mobility and to worship, and segregate COVID-19 patients from their families, certainly, the DOLE can modify its “no vaccine, no work” ban to protect the health and welfare of the people.