The Yorme and Mayor Show 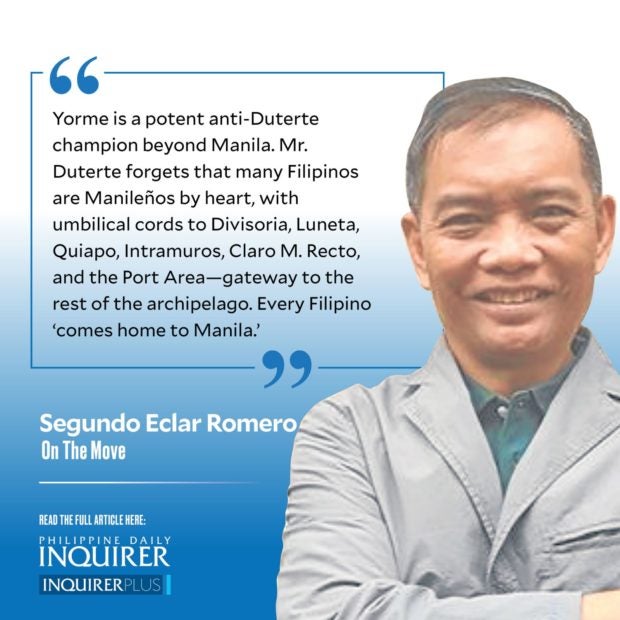 The nation is in the grip of a surging pandemic. Meaning to impose discipline, President Duterte ordered police and barangay officials to escort unvaccinated individuals back to their homes on July 28.

The people panicked and as many as 10,000 tried to get themselves vaccinated in vaccination sites like SM San Lazaro in Manila on Aug. 5. It was clearly a frightful threat. The unvaccinated cannot go out to earn income, obtain food, medical supplies, seek assistance from family and friends, and do similar urgent and critical tasks. On top of that, the crowd was further impelled by the rumor that the unvaccinated will not receive the P1,000 per person to P4,000 per family the national government would be giving out as aid during the lockdown.

Presidential spokesperson Harry Roque backpedaled the presidential threat by blaming the people for supposedly misunderstanding the President. In denying that the President was to blame, Roque went as far as declaring President Duterte the country’s “best communicator.” Even the DDS must pause to parse this claim.

While the people are blamed for being unvaccinated, the real problem is that there are not enough vaccines to go around, apart from their imbalanced distribution. This is a procurement failure of the national government, not the local government and the people.

President Duterte turned this credibility into an opportunity by trying to cut down the second most favored presidentiable in the survey polls, Yorme Isko Moreno of Manila. Mr. Duterte said that because an unnamed mayor was so disorganized, he would take away the authority to distribute the ayuda from him and turn it over to the Department of Social Welfare and Development (DSWD) and the Department of the Interior and Local Government (DILG).

The President thus embarrassed himself, unaware that these two agencies had previously issued certificates attesting to the high performance of Mayor Isko’s government in distributing the ayuda last year and early this year. Mr. Duterte signaled that it was all politics in his mind when, for good measure, he excoriated the “call boy” training of a certain mayor for the Philippine presidency.

Somebody mercifully saved Mr. Duterte from catastrophe. If he actualized his threat, he would have delayed and caused the chaotic distribution of the ayuda for Manila. The Manila local government unit (LGU) has the system, the personnel, the knowledge, the people’s trust, and the facilities for the process. The DSWD and DILG are out-positioned in this task and incapable of matching the LGU performance. Ironically, the imperious national government gave LGUs only two weeks to complete this gargantuan task—difficult for the LGUs, impossible for the DSWD and the DILG.

Eventually, Yorme magnanimously thanked President Duterte, the DSWD, the DILG, and the national government for allowing them to continue with the ayuda distribution. The DSWD and the DILG insinuated themselves into the ayuda distribution kick-off ceremonies, posturing to take over if the process was “disorganized,” to save face for President Duterte.

Thank you, he says, then adds that while the national government has announced this accomplishment, there’s the inanity of delivering this batch without the appropriate syringes and diluents for this brand of vaccine, making it unusable. He quips, with his derisive smile: The higher-ups are trying to solve problems without the requisite grounding, unable to anticipate the results of their actions.

Mr. Duterte has inadvertently boosted Yorme’s political stock, and Isko is on a roll. Yorme is a hands-on, dynamic, innovative, and decisive executive, and he has been able to generate relevant, critical content, and pungent anti-administration commentary using traditional and social media on a continuing basis.

Yorme is a potent anti-Duterte champion beyond Manila. Mr. Duterte forgets that many Filipinos are Manileños by heart, with umbilical cords to Divisoria, Luneta, Quiapo, Intramuros, Claro M. Recto, and the Port Area—gateway to the rest of the archipelago. Every Filipino “comes home to Manila.”