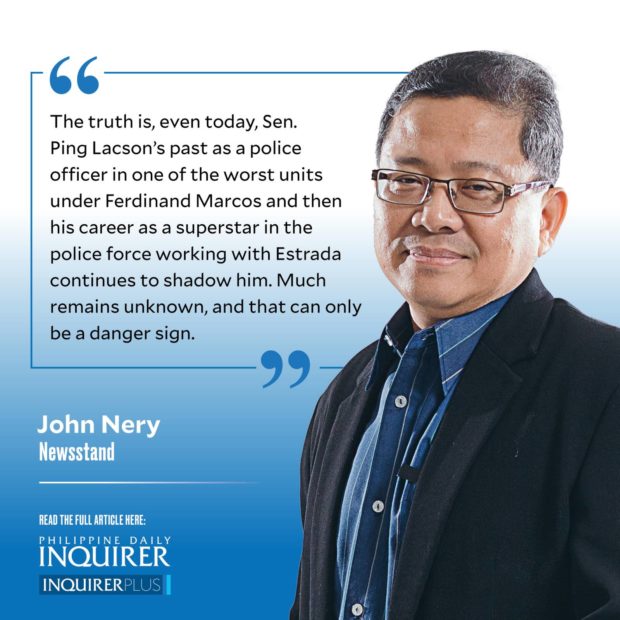 Sen. Ping Lacson ran for president in 2004, and lost badly. He received about 3.5 million votes, some 10 percent of all votes cast, placing a distant third. In the eyes of some, he cost movie actor Fernando Poe Jr. the presidency. Fast forward to 2021. Despite the prospect of a relatively easy reelection to the Senate, in what would be his fourth term, Lacson has decided to try for the presidency again. It’s the presidency or bust.

History is working against him. No one who has previously lost a presidential race ever becomes president; you get only one chance. A corollary exists: A second run for the presidency is always worse than the first. Even Joseph Estrada, who was elected president in 1998 with 10.7 million votes, about 39 percent of all votes cast, did worse in 2010. When he ran for reelection (despite the clear language of the Constitution), he received 9.4 million votes, about 26 percent of the total.

But Lacson enjoys three advantages; two of them should have been the anti-Duterte opposition’s to use. In this sense, he is a warning sign for the opposition.

A STRONG SENATE SLATE. As I wrote in “Leni and the power to convene” (6/22/21), the leader of the political opposition, Vice President Leni Robredo, “has the power to convene a genuinely unified Senate slate.” But for reasons that are easy enough to understand, she has been unable to use this power. Into this vacuum, Lacson and his good friend and putative running mate, Senate President Tito Sotto, stepped in; through the expansive (sometimes too expansive) auspices of Sotto’s Nationalist People’s Coalition (NPC), they are forming a powerhouse Senate slate.

(I do not mean to suggest that everyone on the NPC slate should have been considered by the opposition, but pitching the largest possible tent should have been a priority in any campaign to reject a second Duterte presidency.)

Anyone who has tracked or covered an election campaign knows the importance of moneyed, experienced candidates with wide networks; the advantages include increased pre-event hype, saturation of a campaign event with posters and tarpaulins, louder public address systems, larger crowds.

A BRAND THAT APPEALS TO THE RIGHT. As many who are active online must have noticed, Lacson is currently running a branding campaign on various digital and social media spaces. He is positioning himself as “Heneral ng Bayan,” the People’s General, even though it has been exactly 20 years since his tenure as four-star general and chief of the Philippine National Police came to an early end with Estrada’s resignation. (Lacson retired to run, successfully, for the Senate.) Colleague Manuel L. Quezon may be right when he likens the apparent appeal of a “Heneral ng Bayan” brand to the popularity of Jerrold Tarog’s “Heneral Luna”—the movie is a masterpiece, but it gave rise to two contradictory messages: The cinematic Luna both embodied Teodoro Agoncillo’s central idea of class struggle (a sorely mistaken view, as I have written before) and appealed to the people’s desire for strong leadership. The Duterte campaign in 2016 proved that an entire presidential run can rest on the peace and order issue, even though, at best, it ranks only seventh in the list of voters’ concerns.

A PERFORMATIVE CENTRISM. Many critics of the Duterte regime have responded angrily to the continuing attempts by both Sotto and Lacson to position their coalition-in-the-making as belonging to the political center. “We’re not pro-administration, we’re not pro-opposition, we’re pro-Filipino. That’s first and foremost,” an exasperated Sotto said on ANC. While this statement is overly generous to the leaders of the President’s supermajority in the Senate, it is also true that Lacson, Dick Gordon, Grace Poe, and a few other members of that majority never enjoyed the President’s favor. In “Duterte worried about the 2022 race” (9/17/19), I noted that President Duterte lumped Lacson, Gordon, and Poe together with Robredo. Lacson, then, would have reason to position himself as being in the center: neither pro nor anti. And I’m almost certain that this move to the center will play well with many voters; for a different, more grounded reason, I had joined my voice to those asking the Vice President to build a coalition that went beyond simply being anti-administration.

Last week, in “Warning: Trillanes,” I wrote on the opposition firebrand who has taken the fight directly to President Duterte since 2016. I phrased the title deliberately, with a colon in the middle, because I was not sending a warning to him (I am not in a position to do so); rather, I was writing about him as a warning sign to the opposition he had faithfully represented. There was a pivot in the argument, from Trillanes issuing a warning to Trillanes as himself the warning sign.

Lacson, too, must be understood not only as representing a warning sign for the opposition, but also as a warning himself.