The foolish myth of ‘bobotante’ voters 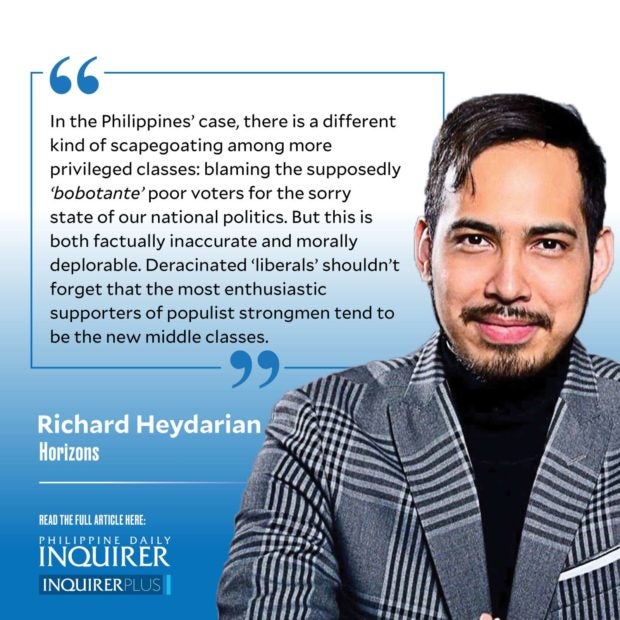 In his ideal republic, the 18th-century philosopher Jean-Jacques Rousseau envisioned a society where “no citizen shall ever be wealthy enough to buy another, and none poor enough to be forced to sell himself.”

Often spurned by the Parisian elite, and deeply in touch with the less than glamorous realities on the ground, the Swiss-born thinker was viscerally cognizant of the hypocrisies of bourgeois liberalism. Deep in his heart, Rousseau understood that any true democracy should provide not only formal political freedoms, but also social justice and egalitarian dignity.

Two centuries later, his works are still extremely relevant, especially in the context of besieged democracies such as the Philippines.

The dangerous myth of “bobotante” (misguided) voters, which foolishly blames the masses for all the country’s political troubles, eerily reflects the profound inequities that besmirch our democratic aspirations. You know a democracy is in trouble when foolish (“bobo”) victim-blaming supplants civic duty and cross-class solidarity.

Although a global empire, Rousseau’s France was bedeviled by scandalous inequity and feudalistic divisions under the Bourbons. Written a century later, Victor Hugo’s “Les Misérables” vividly portrays the crushing poverty of the average French people of that era, which made a mockery of the democratic ideals of the French Revolution.

The subsequent popular revolts in 1848, which shook the entire West, and 1871, which culminated in the establishment of the short-lived Paris Commune, underscored the birth pangs of republican democracy. It took five republics for France to eventually attain a semblance of a functioning democracy, though the country’s marginalized Muslim minority is yet to fully enjoy the constitutional principles of egalitarianism.

The historical parallels with contemporary Philippines is crystal-clear. As Nick Joaquin argues in “A Question of Heroes” (1977), the Philippines would have likely followed a more French-style historical trajectory had the likes of Gen. Antonio Luna and his fellow European-trained ilustrados triumphed against the gringos.

But thanks to decades of American colonial rule, we ended up with a type of “democracy” that conveniently overlooked the more thorny issues of social justice, especially land reform, in favor of regular elections among broadly liberal oligarchs and new entrepreneurial elites.

Our political system is based on Anglo-American conceptions of democracy, which can be traced back to the works of John Locke and the American Founding Fathers, who adamantly emphasized the importance of political liberty and formal freedoms. Centuries of slavery, and countless derivatives in more recent history, clearly prove that social justice was often not a top priority for American-style democracy.

When a democracy is not committed to alleviating social inequities, crises assume cyclical inevitability. In America, immigrants and minorities have often become the scapegoat for national troubles, with former president Donald Trump’s xenophobic attacks on Mexicans and Muslims representing the latest iteration of this troubling historical tendency.

In the Philippines’ case, there is a different kind of scapegoating among more privileged classes: blaming the supposedly “bobotante” poor voters for the sorry state of our national politics.

But this is both factually inaccurate and morally deplorable. Deracinated “liberals” shouldn’t forget that the most enthusiastic supporters of populist strongmen tend to be the new middle classes. If anything, large numbers of Marcos and Duterte supporters are American-accented Filipinos who have regularly visited more prosperous neighboring countries such as Singapore.

And lest we forget, it’s the masses, as the electoral majority, who made the vice presidency of Leni Robredo, as well as the mayoral stints of progressive leaders such as Vico Sotto and Isko Moreno, possible. Clearly, the masses will vote for good change when truly inspiring and compassionate candidates emerge.

Meanwhile, authoritarian nostalgists shouldn’t forget that their idols wouldn’t have made it to Malacañang without the support of a plurality of urban poor and marginalized Filipinos, who constitute the majority of the electorate. Tragically, among the victims of extrajudicial killings have been countless poor Filipinos who voted for Rodrigo Duterte.

While “voter education” matters, the problem is not our voters per se, but the lack of cross-class solidarity and the stubborn conditions of inequality that have undermined genuine democratic processes. As Rousseau warned centuries earlier, we should ensure that elections are not reduced to empty rituals, whereby plutocrats are “wealthy enough to buy” electorates and a poor voter is “forced to sell himself.”