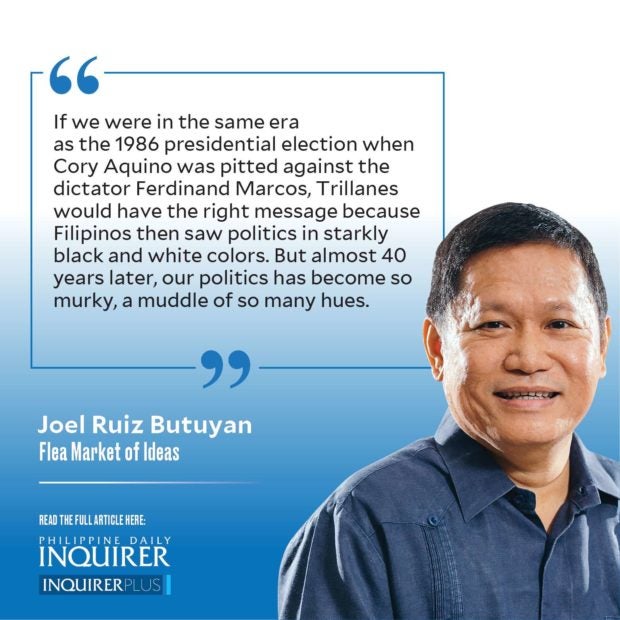 The crusade to unite the opposition under a single presidential candidate is facing a divisive issue between pragmatists and purists. The pragmatists are led by Vice President Leni Robredo, while the purists are spearheaded by former senator Antonio Trillanes IV.

The VP explained that the talks do not yet involve the issue of a common candidate, but only to find commonalities on issues that can be agreed on. Robredo and her close allies are taking a pragmatist’s stand in order “to forge the broadest possible unity among groups and individuals seeking change in 2022.”

Trillanes raised a howl of protest, however, upon learning that Robredo had talked with Lacson and Gordon. He threatened to withdraw his support for Robredo if the latter crossed what he marked as two “red lines”: first, Robredo must never give way to any other candidate, and the talks must only be premised on all the other candidates’ renouncing the presidency in favor of Robredo, and; second, Robredo must never engage in any form of talks with “Duterte collaborators” like Lacson and Gordon.

Trillanes is okay with Robredo talking with Moreno and Sen. Grace Poe, but only for the purpose of either of them agreeing to run for vice president under Robredo.

Judging by Trillanes’ declarations, he wants a puritanical moral crusade as the opposition’s battle cry in winning the presidency. If we were in the same era as the 1986 presidential election when Cory Aquino was pitted against the dictator Ferdinand Marcos, Trillanes would have the right message because Filipinos then saw politics in starkly black and white colors. But almost 40 years later, our politics has become so murky, a muddle of so many hues. In the minds of many disillusioned Filipinos, our country has experienced so many betrayals from politicians who bannered democracy, human rights, and anti-corruption slogans.

Any puritanical moral crusade now will not resonate with the impact it had in 1986, and even earnest politicians who unfurl the banner of moral purity will be viewed with skepticism because of the stain of association with politicians who brought disappointment in the past.

For a substantial segment of our population, people who have the wherewithal to denounce the bloody drug war and the absurd pivot to China are perched on a pedestal of privilege. They have roofs over their heads, ample food on the table, and private education for their children. For a huge sector of our society, the drug war and the China issues are not even among the top issues that matter in next year’s presidential elections, because, in their own lives, there are more pressing survival issues that they want candidates to prioritize and focus on.

Trillanes and his group do not believe in these lessons. To them, the “non-negotiable” objective is to win the presidency with a candidate untarnished by any direct or indirect association with the Duterte administration.

To Robredo and the 1Sambayan leaders who support her coalition-building efforts, the lessons are ominously real. To them, the objective is either to win the presidency or to make Mr. Duterte’s chosen successor lose in the elections.