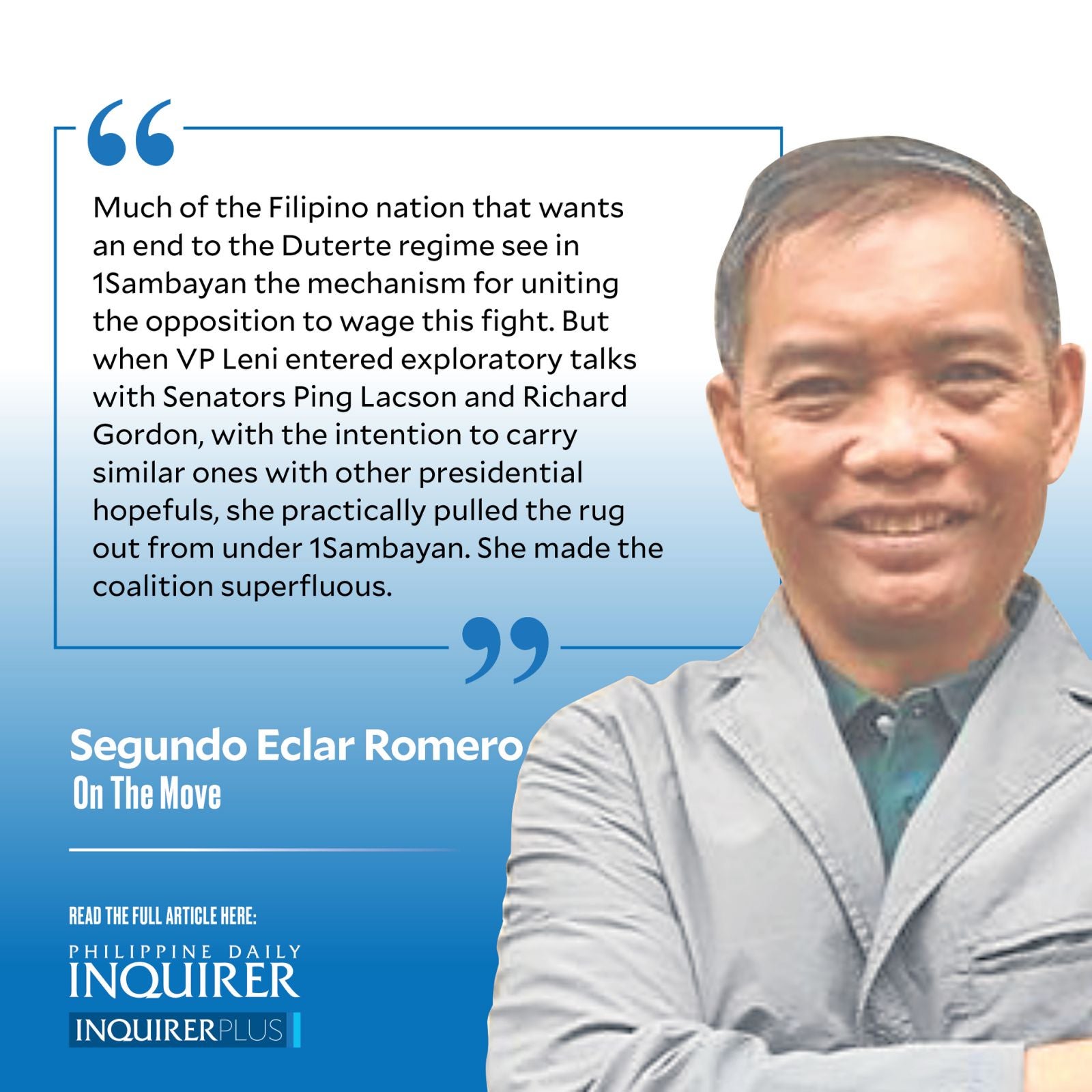 Did VP Leni just pull the rug from under 1Sambayan?

Much of the Filipino nation that wants an end to the Duterte regime see in 1Sambayan the mechanism for uniting the opposition to wage this fight. But when VP Leni entered exploratory talks with Senators Ping Lacson and Richard Gordon, with the intention to carry similar ones with other presidential hopefuls, she practically pulled the rug out from under 1Sambayan. She made the coalition superfluous. Sen. Antonio Trillanes, reacting like a wounded ally, publicly questioned the propriety of these unilateral moves toward non-opposition personalities.

What does 1Sambayan make of these moves? An ABS-CBN report quoted 1Sambayan convenor Fr. Albert Alejo as having said (translated from Filipino): “Our suggestion now is for VP Leni to appear before the whole [1Sambayan] convenors’ group of 20 and there our view of what is happening will best ripen.” On the other hand, another 1Sambayan convenor, former ombudsman Conchita Morales, said: “She is in fact trying to get them to unite with one opposition candidate. I’m sorry, Mr. Senator Trillanes, I don’t think that by talking to Sotto and Lacson, Leni is already waltzing with them. No, she is not, from my own point of view.”

To be fair to VP Leni, 1Sambayan has not lived up to its promise. It has not been the galvanizing or catalyzing force it had imagined itself to be. It has put in part-time effort for full-time work. Using a cursory McKinsey 7s evaluation system, it has so far proven wanting in strategy (long-term game plan), systems (recruitment, organization, mobilization, social media), structure (decision-making, vertical and geographic), staff work (sufficient professionals and experts), skills (expertise in negotiation, advocacy, political campaigns), style (theory and practice of inclusive coalition management), and shared values (rainbow coalition without agreed-upon core principles).

The criteria for choosing a candidate should have been a tangible Unity Opposition Program of Government (operationalize “Leadership by Heart,” “Inclusive Governing”) with which to vet candidates in terms of their commitment and capability to deliver. Personal characteristics are too superficial to use, often leading to irrelevant decisions. In June, Manny Pacquiao was publicly rejected as a possible nominee because of his absenteeism in the Senate. Now, he is being reconsidered. Other presidential hopefuls who have left are being enticed to reenter the contest.

The 1Sambayan process could not get underway, especially since the personalities who would have given it credibility and seriousness—Grace Poe, Isko Moreno, Nancy Binay—opted out of the process, refusing to say “I do” just before 1Sambayan’s celebratory declaration last June 12 of the pool of nominees they were supposedly vetting.

It seems like 1Sambayan was waiting for VP Leni to declare herself a candidate before it could get going. Meanwhile, VP Leni could not get going because of the lack of logistical and mobilizational support that 1Sambayan could have begun to put together.

Not that 1Sambayan can no longer repurpose itself. If 1Sambayan can give up its search for a singer, perhaps it might do better composing the song that the opposition candidate, whoever he or she might be, would sing during the electoral campaign. However, that song must not be a mere amalgam of lyrics collected from a rainbow political coalition. Otherwise, it will not be the people’s song, but the incoming politicians’ claim to their pound of political flesh in the next administration.

This 1Sambayan turn of events means that Filipinos looking to prevent another six years of the Duterte regime need to look elsewhere for the mechanism for winning the May 2022 presidential elections.