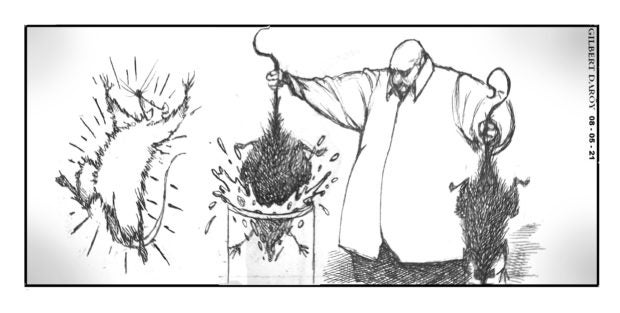 President Duterte made a point of boasting during his last State of the Nation Address (Sona) that he had “fired” 43 Bureau of Immigration (BI) personnel implicated in the notorious “pastillas” bribery scam, which eased the entry of scores of Chinese nationals into the Philippines for a “service fee” of P10,000 each. “I fired them all. Talagang pinaalis ko sa gobyerno,” declared Mr. Duterte.

The President’s emphatic claim, however, was soon exposed as a falsity. Justice Secretary Menardo Gueverra admitted just two days later that not only were the 43 personnel not fired, they were back at work at the main office, although not in their previous assignments in the airport terminals.

And, as it turns out, there were not only 43 personnel but 86 who had been suspended for six months without pay for suspected involvement in the pastillas scam (which got its name from the players’ modus operandi of rolling up the bribe money in paper, like the popular milk candy). All those implicated are now back to work in “back-end and non-sensitive positions,” according to BI spokesperson Dana Krizia Sandoval, except for the whistleblower and a retiree. This situation is unacceptable to Sen. Risa Hontiveros, who exposed the scheme in February 2020 during a Senate investigation of the possible link between the boom of Philippine offshore gaming operators to prostitution and trafficking. Hontiveros wants the involved personnel to be indefinitely suspended given the gravity of the BI scam, which was estimated to have netted as much as P40 billion in illegal transactions dating back to 2017 and flooded the country with tens of thousands of spuriously documented Chinese nationals.

A year later, in February this year, Hontiveros disclosed that the pastillas scam has in fact continued to flourish, the grease money said to have escalated to P550,000 each. 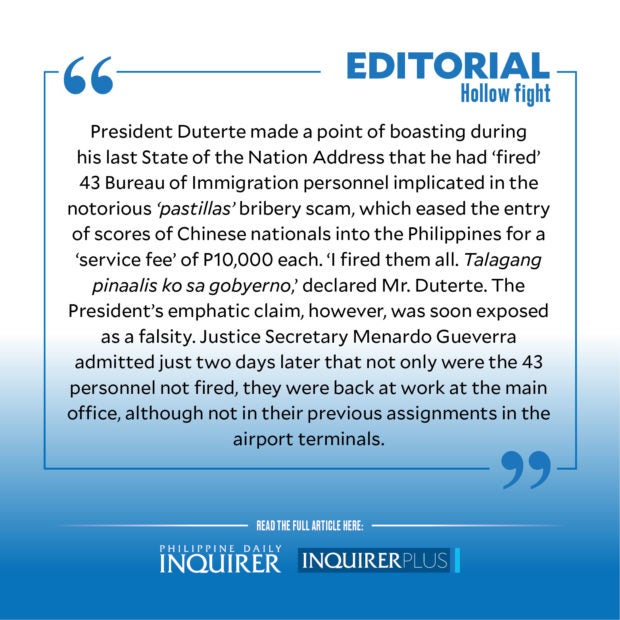 That practically all of those suspected of being involved in the bribery scandal are back at work with the lapse of their six-month preventive suspension, with no cases as yet filed, is illustrative of the hollowness of the Duterte administration’s avowed fight against corruption. In the same breadth where the President mentioned the purported strong action taken against erring BI personnel, he also practically threw up his hands in defeat, saying corruption in government is “endemic” and so “You cannot stop corruption, nobody can stop corruption unless we overturn the government completely.”

Perhaps the massive failure is also because of Mr. Duterte’s penchant for sabotaging his own mission by reassigning or simply letting go of allies embroiled in various scandals without the proper sanctions?

According to a July 2021 paper titled “National Security, Anti-Corruption, and Anti-Crime Policies in the Duterte Administration” issued by the Ateneo School of Government, the recycling of officials after they are caught in controversies is one reason why corruption has remained a problem, and an area where Mr. Duterte has seriously fallen short of his ambitious 15-Point Legacy Agenda, which was circulated as part of his 2016 campaign platform.

Mr. Duterte famously promised in 2016 that he would get rid of corruption in the Philippines by the end of that year. Transparency International rankings show, however, that corruption has actually gotten worse during the Duterte administration.

Former education secretary Edilberto de Jesus noted in the Ateneo paper that in 2004, the Philippines was 102nd out of 146 countries based on perceived levels of public sector corruption. That rank had deteriorated to 146th out of 178 countries by 2010, but by 2015 during the Aquino administration, the Philippines moved up to the 95th slot out of 168 places, joining the less corrupt 50 percent of the countries in the ranking for the first time.

Midway into the Duterte administration in 2019, the Philippines fell to 113th among 180 countries in the perceptions index, and then last year, slipped further to 115th.

“The failure of the Anti-Corruption campaign followed from the presidential approach to governance that removed or weakened the guardrails already proven necessary to control corruption,” noted De Jesus. “Cases of officials fired from their assignments later surfacing in other government offices quickly erased the favorable impression gained by their dismissal.”In the case of the BI mess and what would turn out to be a baseless presidential claim made in the Sona no less, presidential mouthpiece Harry Roque admitted that Mr. Duterte was indeed unaware that the BI personnel had gone back to work. But what he meant, according to the eternally improvising spokesperson was that the Department of Justice should do its duty on the matter, because: “Hindi po katanggap-tanggap iyong ginawa nilang ‘pastillas’ scheme; kinakailangan po talaga sibakin sila.”

What sweet luck for the crooks and cons in the BI ranks that that remains to be seen.