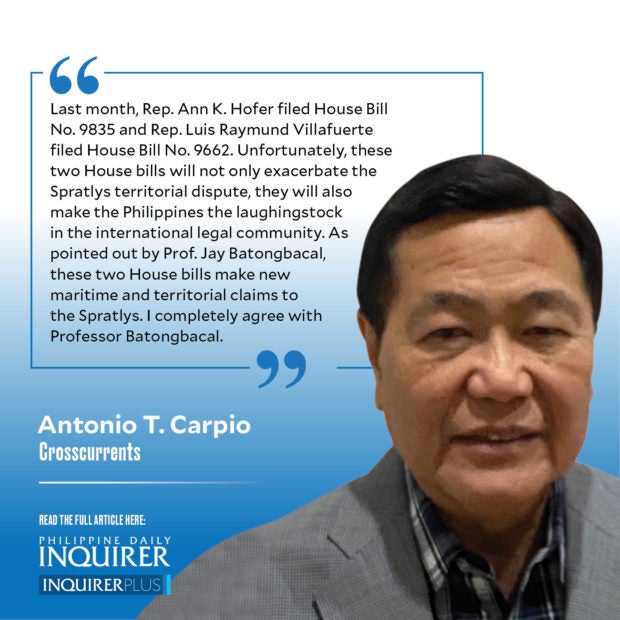 The Philippines never claimed the entire Spratlys, a collection of high-tide features situated off the coast of Palawan and Borneo facing the South China Sea. Last month, Rep. Ann K. Hofer filed House Bill No. 9835 and Rep. Luis Raymund Villafuerte filed HB 9662. These two House bills are verbatim reproductions of the draft bill proposed by retired Justice Francis Jardeleza and lawyers Melissa Loja and Romel Bagares. These three lawyers claim that their proposed bill is an inexpensive and effective means of enforcing the Arbitral Award of July 12, 2016.

Unfortunately, these two House bills will not only exacerbate the Spratlys territorial dispute, they will also make the Philippines the laughingstock in the international legal community. As pointed out by Prof. Jay Batongbacal, the director of the Institute for Maritime Affairs and Law of the Sea at the University of the Philippines, these two House bills make new maritime and territorial claims to the Spratlys. I completely agree with Prof. Batongbacal.

Any Philippine claim to these submerged features in Brunei’s extended continental shelf is not only patently contrary to the UN Convention on the Law of the Sea (Unclos) and customary international law, it also defies logic and common sense. The resources of submerged features within the extended continental shelf or exclusive economic zone of an adjacent coastal state belong exclusively to the adjacent coastal state. As if this egregious blunder is not enough, these two House bills also claim Brunei’s Louisa Reef, a territorial claim to a high-tide feature off the coast of Brunei. Louisa Reef is outside the polygonal lines of PD 1596, and was thus never claimed before by the Philippines.

Third, these two House bills claim Jubilee Bank, Ladd Reef, and Coronation Bank, submerged features within the extended continental shelf of either Vietnam, Malaysia, or Brunei but definitely outside the extended continental shelf or exclusive economic zone of the Philippines. These submerged features cannot be claimed by the Philippines under Unclos. Moreover, these two House bills claim as Philippine territory Spratly Island, a high-tide feature occupied by Vietnam. Spratly Island is outside the polygonal lines of PD 1596 and was thus never claimed before by the Philippines as its territory. These new claims of the Philippines will again only exacerbate the Spratlys dispute.

Clearly, these two House bills will needlessly open a new maritime and territorial dispute between the Philippines on one side and Malaysia, Vietnam, and Brunei on the other side. Do we want this?