A short history of History Week 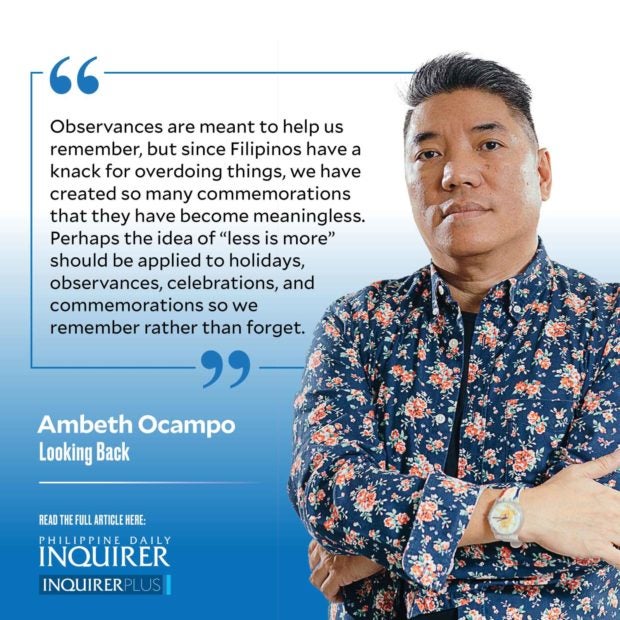 When references to History Week or Buwan ng Kasaysayan appeared in my social media feed over the weekend, I got confused. Isn’t August known to all school children as Buwan ng Wikang Pambansa or National Language Month? Wasn’t History Week celebrated from Sept. 15-21? Martial law babies like myself, or those who were children in the last century, came of age knowing Linggo ng Wika or National Language Week, not Language Month. We vaguely remember that Linggo ng Wika fell around Aug. 19, birthday of the acknowledged Father of the National Language, Manuel Luis Quezon.

Linggo ng Wika was memorable for me because it was the only time, aside from Pilipino class, that we were allowed to speak in Tagalog. English was supposed to be spoken on campus all the time even in the playground, the cafeteria, or the bathroom. To enforce this, snitches were deputized to report on infractions that met a five-centavo fine for every Tagalog word uttered. Some snitches raised income by poking classmates with a pencil and demanding payment for every “aray!” uttered in pain. This must have been one of the legal ways of bullying. In retrospect, should I be grateful to this flawed system for my English fluency? I do know that “ouch” can never replace “aray” or provide the same relief as “p*t*n*i*a!” when you are in pain or stress.

As chair of the National Historical Commission from 2002-2011, I remember having to approve the theme for History Week each year. I did not know that in 2012 Noynoy Aquino issued a proclamation extending History Week into History Month. He also moved it from September to August. With the stroke of a pen, President Aquino repealed one of many sneaky Marcos-period decrees that glorified martial law, a period we now look back to as a “dark age” in our history. History Week was cleverly timed to conclude on Sept. 21, the date of Marcos’ 1972 martial law proclamation, a date he once considered “National Thanksgiving Day.” By moving History Week to August, it concluded with National Heroes’ Day; by extending it to a month, it gave teachers more time “to emphasize the most significant turning points in Philippine history.”

If you are to check other historical events that occurred on Sept. 21, these stand out: Sept. 21, 1896, Tomas Remigio is arrested for complicity in the Philippine revolution; Sept. 21, 1944, Jose P. Laurel declared martial law over the Philippines effective Sept. 22, 1944, at 9 a.m. to brace for imminent invasion and provide for public safety; Sept. 21, 1949, Carlos P. Romulo was elected president of the 4th General Assembly of the United Nations; Sept. 21, 1974, Marcos issued a decree renaming all barrios into barangays. Acknowledging the foreign origin of the word “barrio,” Marcos referred back to the barangay not as a boat, but as the basic political unit before the Spanish conquest. Marcos amended Republic Act No. 3590, the Revised Barrio Charter, to become the Revised Barangay Charter. For both good and bad, the Sept. 21, 1972 Marcos proclamation of martial law was a turning point in history whose legacies we still endure today.

When Aquino created the August History Month in 2012, he repealed a series of proclamations. In 1974, History Week was moved from Sept. 17-23 to Sept. 15-21. In 1973, Marcos moved History Week from May 24-30 to Sept. 17-23. The rationale for these dates were not indicated in the proclamations, but what we do know is that there was no official History Week before 1971. Our first History Week was declared to coincide with the Fifth Triennial Conference of the International Association of Historians of Asia held in Manila from May 24-29, 1971. It was also the 400th year of the foundation of (Spanish) Manila. Thus are the unhistorical reasons for the annual celebration of History Month.

Adding to the confusion is that aside from History and National Language Month, August is also: Farms Safety Month, National Lung Month, National Electrification Awareness Month, Breastfeeding Awareness Month, and National Census Month unless these have been amended or repealed by other proclamations. Observances are meant to help us remember, but since Filipinos have a knack for overdoing things, we have created so many commemorations that they have become meaningless. Perhaps the idea of “less is more” should be applied to holidays, observances, celebrations, and commemorations so we remember rather than forget.