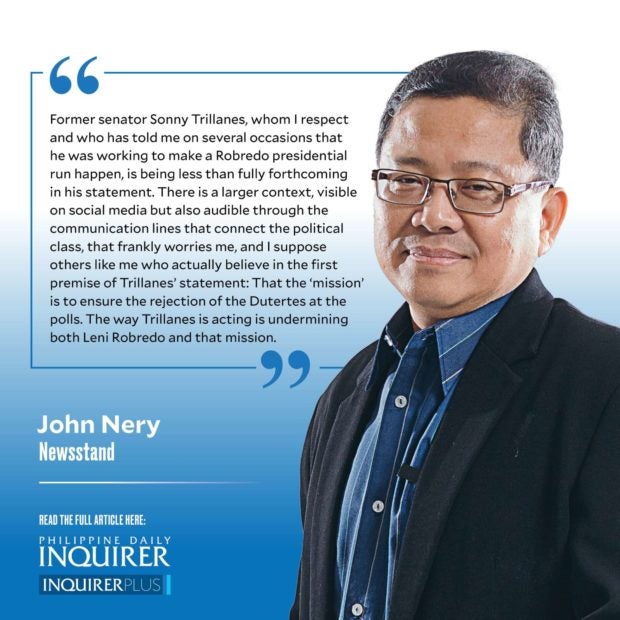 After another round of sniping at Vice President Leni Robredo last week, former senator Sonny Trillanes issued a lengthy explanation yesterday. The statement is a significant walking-back of his supporters’ more aggressive comments, but it still retains a warning against the leader of the opposition. He said he and his Magdalo group want 1) only Robredo to run as the united opposition candidate for president, 2) either Isko Moreno or Grace Poe to serve as Robredo’s running mate, and 3) Robredo not to ally with “Duterte collaborators” Ping Lacson or Dick Gordon. That he included this last demand as one of the “non-negotiables” or “red lines” is only the most manifest threat.

But Trillanes, whom I respect and who has told me on several occasions that he was working to make a Robredo presidential run happen, is being less than fully forthcoming in his statement. There is a larger context, visible on social media but also audible through the communication lines that connect the political class, that frankly worries me, and I suppose others like me who actually believe in the first premise of Trillanes’ statement: That the “mission” is to ensure the rejection of the Dutertes at the polls. The way Trillanes is acting is undermining both Robredo and that mission.

I have always been concerned that what we can call “hysterical activism” (loud calls to unite that come with acts of willful gatekeeping, immediately excluding others) will get in the way of organizing a broader political coalition. I can now add what we can unfortunately call Trillanes’ “performative political puritanism” to my list of concerns. If the former senator believes in the big tent, why is he cutting off the posts and tearing the canvas? Does he think the broad political coalition that supported Cory Aquino in 1986 all the way to victory consisted only of “original” oppositionists from 1972? Politics IS addition.

But the larger context I spoke of refers to talk among Trillanes supporters that he will make a better unity candidate. Here are some reasons, however, why despite his valiant opposition to the Duterte regime Trillanes cannot be that candidate.

THE ARITHMETIC OF CHOICE. Winning a Senate seat is not the same as winning the vice presidency or the presidency. The main difference is that the Filipino voter has 12 votes to use for the Senate, and only one for each of the two highest positions in the executive.

Lacson in 2004, Gordon in 2010, Poe in 2016 are only three ready-to-hand examples of senators failing in their bid for higher office. This should be a lesson well learned by Trillanes; in 2016, he was one of FIVE incumbent senators (and one of THREE members of the Nacionalista Party) who ran for vice president. He placed fifth out of six candidates; his vote total was only 6 percent of the winning candidate’s total. In other words, in 2016 Leni Robredo, the eventual winner, earned 16 times more votes than Trillanes did when they competed for the same position. The idea being floated by some people close to Trillanes or to the Magdalo group that his Senate stint makes him a more winnable candidate for the presidency should be taken with a shaker-full of salt (and a large heaping of history).

THE CALCULUS OF DISINFORMATION. It is true that, as of the June 2021 Pulse Asia survey, Robredo only has a voter preference rate of 6 percent. Since she has a 100-percent awareness level, I understand this low voter preference rate IN PART as the result of five uninterrupted years of demonization, through organized disinformation campaigns run by Duterte supporters (for instance, in influential accounts banned by Facebook for “coordinated inauthentic behavior”) or by government media agencies.

Demonization through disinformation affects even the opposition senators who are extremely adept in communicating. Risa Hontiveros is ranking only at 14-22, Kiko Pangilinan at 14-19. And in Leila de Lima’s case, we see most clearly disinformation’s entirely visible hand. It is a mistake to disregard the cumulative effect of years of disinformation targeting the opposition; Mara Cepeda’s otherwise excellent analysis of Robredo’s chances in Rappler is undermined by its merely passing glance at the effects of disinformation. The Vice President has had a bullseye target on her back since 2016; the target shooting has been nonstop since. If Trillanes’ supporters think this makes her a weaker candidate, they should consider that he has long been targeted, too. Despite two terms in the Senate, he is only at 19-29.

THE GEOMETRY OF VICTORY. To foster unity, not only among opposition groups—who by themselves will NOT have enough voters to win the presidency—but among all political groups who do not want any form of continuity for the Duterte regime, the focus must be on drawing a straight line between that big-tent political coalition and the mission. But while Trillanes’ political analysis is valid, that Robredo is the only possible unity candidate, his behavior since January this year has been baffling, and only serves to invalidate his previous work. In his triangle of options, the vice presidency and the presidency are out of his reach; but the last option is important, too: To earn a return to the Senate. He should recalibrate.