Hidilyn, First of Her Name 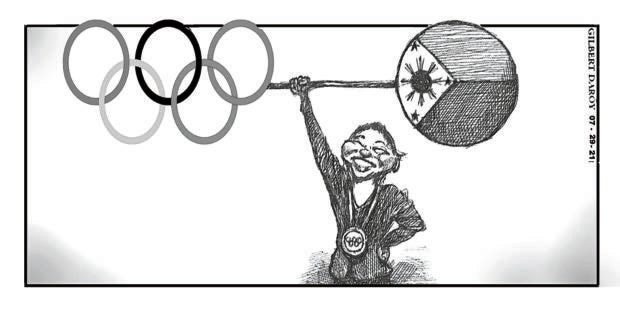 There will be — should be — a time to hold those who sullied Hidilyn Diaz’s reputation — putting her in conspiratorial matrices and all — accountable for their lies and baseless accusations.

For now, let the momentum of her spectacular triumph in the Tokyo Olympics organically blow away the haters. It has begun to already, after all.

Trolls and government officials — it’s sometimes hard to tell the difference — who once dismissed her as some exploitative panhandler milking her status as a sports heroine to leech cash off private entities are now bartering what little remains of their moral currency to purchase tickets to the Hidilyn Diaz bandwagon—a collective about-face that provides comic relief, somewhat, in the often toxic social media environment.

For now, the story is on Diaz writing Philippine sports history — herstory — and exposing what must be done so that the first gold medal that the country has won in the Summer Games won’t end up being the last.

Diaz’s victory at the Tokyo International Forum changed drastically the prevailing narrative of the Philippines in the Olympics. For long, finding ways to improve the country’s sporting program meant scouring the remains of yet one more disastrous campaign in the Olympiad, looking for a black box of sorts in an effort to ensure that the same mistakes won’t be repeated. 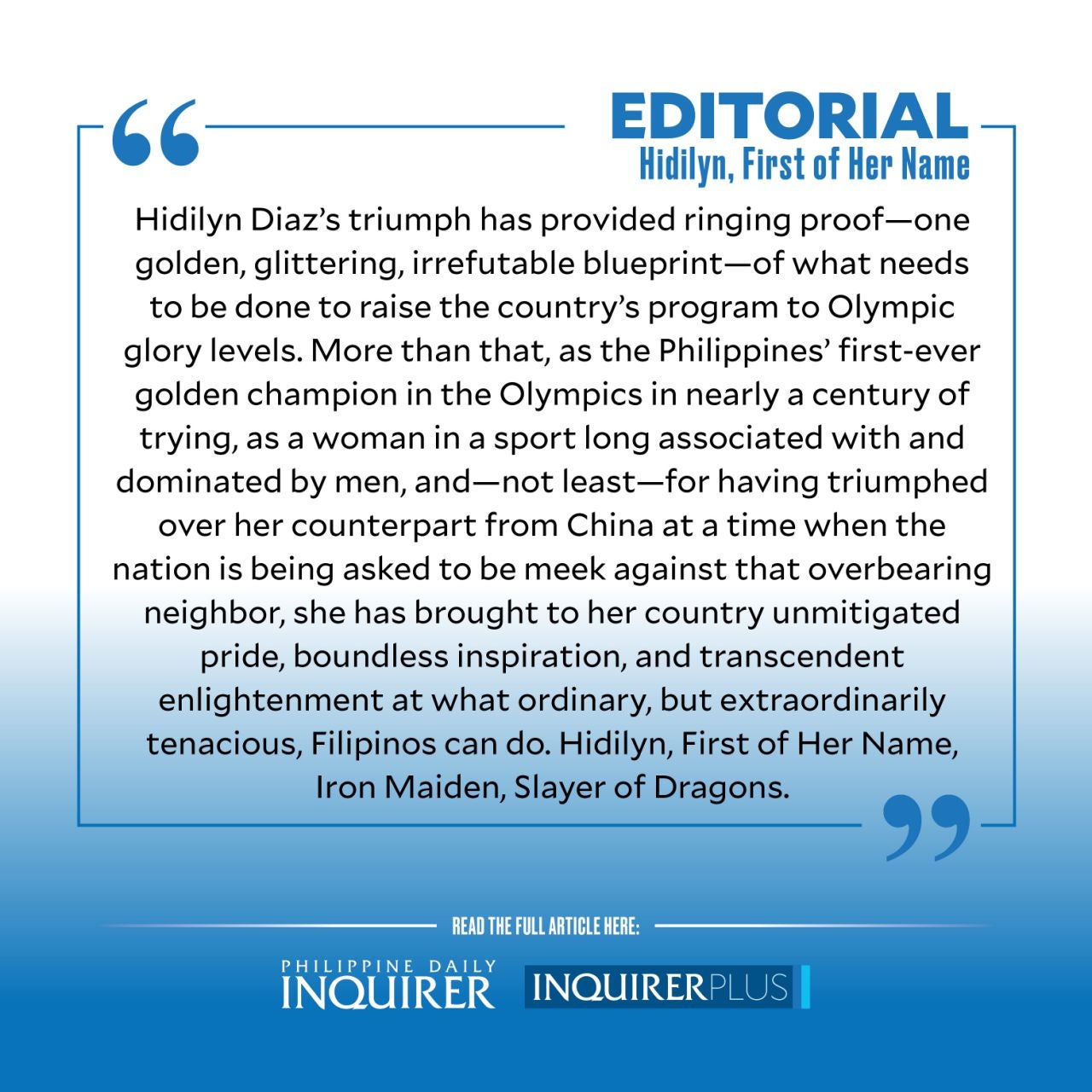 But Diaz provided our country with something else: a template of triumph, a blueprint that actually worked — eliminating the need for hypotheticals and second-guessing — and one that shouldn’t be impossible to clone.

Diaz had the kind of backing the government can afford to provide for national athletes singled out as potential Olympic medalists. She also found herself a private partner, the MVP Sports Foundation (MVPSF), that readily opened its wallet to purchase the items in her grocery list that public funds could no longer afford.

Art Aro, the MVPSF program director, said the foundation’s game plan was simple: Look at what government can no longer spend for and focus on those needs. That allowed Diaz to assemble a team that hummed like the engine of a brand new luxury car and guided her to the Olympics.

She had a vaunted Chinese coach, Gao Kaiwen, who was the sage of the group she fondly refers to as Team HD. Julius Naranjo served as her strength coach, who made sure Diaz would peak at the right moment for the Games. She had a nutritionist in Jeaneth Aro, who handled the one worry that had been a frequent annoyance for Diaz in the past: her weight. And then there was Dr. Karen Trinidad, a sports psychologist who silenced the doubts and the white noise in Diaz’s thoughts.

This team was yet unformed when Diaz won silver in the Rio de Janeiro Olympics five years ago.

The Philippine Sports Commission helped fund a huge part of her team, paying the salaries of Gao and Trinidad and the travel expenses of the entire team. The MVPSF helped by supplying Naranjo and Aro their paychecks.

“Winning a gold medal in the Olympics is not easy,” Diaz said in Filipino. “Having Team HD made it less difficult.”

PSC chair William Ramirez has said they will continue to push for more financial focus on sports where the country can win golds in the Olympics. But the reality is the government’s funding is not enough. Private investment must also be present—during the training, not at the end.

A look at the current batch of Filipino Olympians proves that the Team HD formula really works. The athletes being counted on to deliver medals either have squads built around them or have private funding to augment government cash. The country’s national boxers have private financial support. The golfers, whose marquee athlete, US Women’s open champion Yuka Saso, flew into Tokyo bearing gold expectations, likewise enjoy generous corporate backing. Then there’s EJ Obiena, whose support group includes coaches and physiologists.

“It’s the perfect formula, public and private support,” said boxing federation executive director Ed Picson. That’s been a conclusion reached after studying what went wrong in delegations that could not strike gold in the Olympics. But it was a conclusion easily and often ignored in the name of the endless patronage politics that has plagued Philippine sports.

This time, Hidilyn Diaz has provided ringing proof—one golden, glittering, irrefutable blueprint—of what needs to be done to raise the country’s program to Olympic glory levels.

More than that, as the Philippines’ first-ever golden champion in the Olympics in nearly a century of trying, as a woman in a sport long associated with and dominated by men, and—not least—for having triumphed over her counterpart from China at a time when the nation is being asked to be meek against that overbearing neighbor, she has brought to her country unmitigated pride, boundless inspiration, and transcendent enlightenment at what ordinary, but extraordinarily tenacious, Filipinos can do.

Hidilyn, First of Her Name, Iron Maiden, Slayer of Dragons.