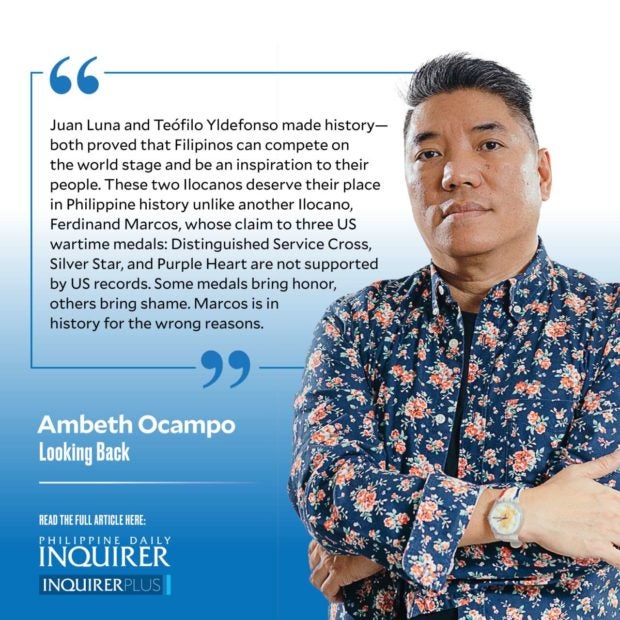 News of Hidilyn Diaz winning the first Olympic gold medal for the Philippines made international news and gave the nation a much needed high. Her win came at the right time, drowning out reportage on the longest State of the Nation Address ever delivered by a post-Edsa president. Thanks to the urgent call of a full bladder, the nation was spared from further rambling and inanities not in the President’s prepared speech. Diaz brought a sweet, double victory for the Philippines: Aside from setting a new world record, Diaz foiled China’s expected clean sweep of the golds in women’s weightlifting.

Now that Diaz has made history, let’s go further back in history to Juan Luna (1857–1899) and Teófilo Yldefonso (1903–1942), two Ilocanos who won medals and honor for themselves and the Philippines. Luna was awarded a first class or gold medal in the 1884 National Exposition of Fine Arts in Madrid for “Spoliarium.” Yldefonso, aka the “Ilocano Shark,” was the first Filipino to win an Olympic medal. For the past 89 years, Yldefonso was the only Filipino with a pair of Olympic medals (bronze medals in men’s 200-meter breaststroke event in the 1928 and 1932 Summer Olympics). Yldefonso’s record is now matched by Diaz’s pair of Olympic medals in women’s weightlifting (silver in the 2016 Summer Olympics, gold in the 2020 Summer Olympics).

Yldefonso must have seen Adolf Hitler at the opening of the 1936 Berlin Olympics where he competed but returned home empty-handed. Unlike modern swimmers who are trained in boot camps or have professional coaches, Yldefonso learned to swim on his own in the Guisit river in Piddig, Ilocos Norte. After learning to float and tread he went beyond “langoy aso” (dog swimming) developing a distinct swimming style, the “Yldefonso Stroke,” which he displayed in the Olympics. The International Swimming Hall of Fame website states that he “transformed the breaststroke style of his time by bringing the stroke more to the surface of the water rather than under the water as was more common at that time. European text books called him ‘The Father of the Modern Breaststroke.’”

A lieutenant when World War II broke out, he survived the Bataan Death March but died in the Capas internment camp. While his remains have not been recovered, his memory lives on in a concrete bust and a national historical marker erected in his hometown in Piddig, Ilocos Norte. Juan Luna is also memorialized with a monument in Badoc, his birthplace.

It is not well-known that Luna was awarded two medals from the Madrid Exposition of Fine Arts: A second class or silver medal in 1881 for his painting “The Death of Cleopatra” currently displayed in the Museo del Prado in Madrid, and a first class or gold medal in 1884 for “Spoliarium” that holds pride of place in the National Museum of the Philippines.

Together with Luna, another Filipino, Felix Resurrección Hidalgo was awarded a second-class or silver medal for his painting “Christian maidens exposed to the mob.” We should not treat the Madrid Art medals like Olympic gold, silver, and bronze medals because Luna won one out of three first class medals awarded in 1884, and Hidalgo won one out of 17 second class medals. While Luna was the 1884 crowd favorite, he was denied the coveted “Medal of Honor” that was not awarded that year.

Luna and Yldefonso made history — both proved that Filipinos can compete on the world stage and be an inspiration to their people. These two Ilocanos deserve their place in Philippine history unlike another Ilocano, Ferdinand Marcos, whose claim to three US wartime medals: Distinguished Service Cross, Silver Star, and Purple Heart are not supported by US records. Some medals bring honor, others bring shame. Marcos is in history for the wrong reasons.