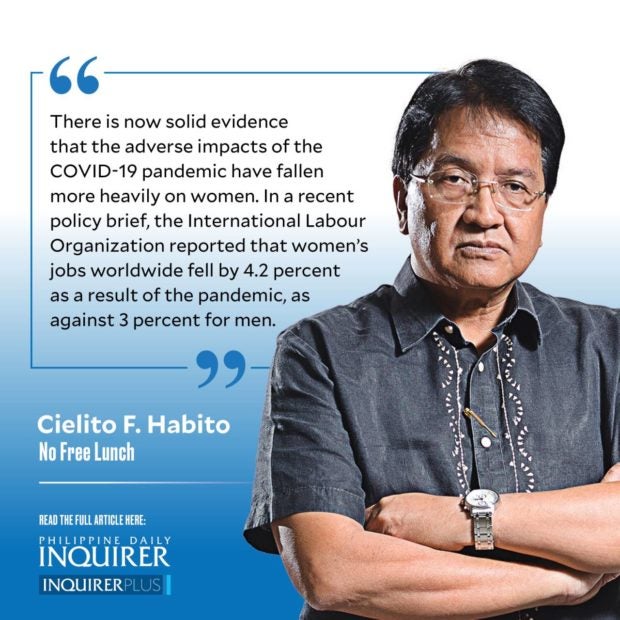 There is now solid evidence that the adverse impacts of the COVID-19 pandemic have fallen more heavily on women. In a recent policy brief, the International Labour Organization reported that women’s jobs worldwide fell by 4.2 percent as a result of the pandemic, as against 3 percent for men. It also projects that “only 43.2 percent of the world’s working-age women will be employed in 2021, compared to 68.6 percent of working-age men… (and) in 2021 women will be 25.4 percentage points less

likely to be in employment than men.” There are at least four ways that the adverse impacts of the pandemic and the resulting recession are lopsided against women worldwide.

First, the medical and economic frontliners, who have been most exposed to the virus, are predominantly women. While I don’t have the data for the Philippines, the numbers from the European Union are illustrative. Data from the European Institute for Gender Equality indicate that of the 49 million health care workers in the EU, around 76 percent are women, thereby outnumbering men three to one. Women also dominate workers in essential services that have continued through quarantine restrictions, including cashiers and bank tellers, and in domestic cleaning, childcare, and other home help functions. In Europe, women make up 95 percent of domestic cleaners and helpers, 92 percent of child care workers, 86 percent of personal care workers in health services, and 82 percent of cashiers, and our own numbers can’t be much different. All told, more women than men have been rendered more vulnerable to infection by the virus.

Second, women also dominate the jobs in the economy that are hardest hit by the pandemic recession. These jobs are in restaurants, hotels, and tourism establishments; retail establishments, personal services like hair and beauty salons, and in schools. Many of these jobs will not be restored for some time to come, especially in the tourism sector; some may not be restored at all even when pre-pandemic levels of overall economic activity return. I have already written about a likely “defeminization” of retail, as the lockdowns speeded up Filipino consumers’ shift to e-commerce and online services. Trade and Industry Secretary Ramon Lopez recently reported 86,726 business names registered for online businesses from April to December last year, against only 1,848 such registrations in March, just before the pandemic hit. Shopee, Lazada, and other online shopping platforms have supplanted SM, Robinsons, Gaisano, and other mall chains as our favored shopping venues. This also means that those uniformed salesladies in the latter have been effectively replaced by motorcycle-riding delivery men from J&T Express, Ninja Van, Lalamove, and other logistics service firms. This structural shift in the retail industry could lead to a permanent shift of “last-mile” retail jobs from women to men—unless more women take to motorcycle riding and the new and growing jobs that skill now offers.

Third, the brunt of housework and child care responsibilities—including mentoring children on their online classes — has fallen on women, especially where women work from home while their husbands don’t. A study by McKinsey found mothers to be more than three times as likely to meet the majority of the demands for housework and caregiving during the pandemic, compared with fathers. Executive coach Rodger Price observed: “So many women take more psychological ownership for how the home is going. The normal pressure of this during the pandemic, plus… dealing with the impact on their work, [can be] overwhelming…”

Fourth, women have suffered from increased domestic violence that the pandemic has brought about in many places. As early as April 2020, United Nations Secretary-General António Guterres noted a “horrifying global surge in domestic violence” since the start of the COVID-19 lockdowns. Researchers have attributed it to stress due to increased social isolation.

As we plan our way out of the pandemic crisis, we clearly need to pay due attention to the welfare of women, who, through no fault of their own, have been its bigger victims.

ICC case, probe vs Duterte on drug killings are doomed to fail – Palace