Waiting for the wind 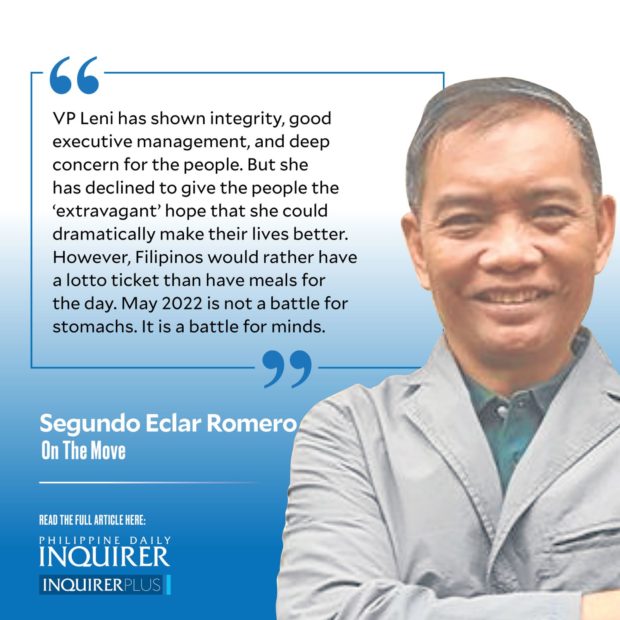 Last Tuesday night, I watched Christian Esguerra’s “One on One with Vice President Robredo” (After the Fact, ANC). The discussion revolved around VP Leni’s dilemma about running for president in 2022. My take was, she realized that her survey rating (6 percent in the Pulse Asia poll, June 2021) was way too low as an initial velocity point for a successful presidential campaign. She started with low numbers before in her run for VP, but running for the presidency is qualitatively different. As a presidential candidate, she would be responsible for generating the campaign resources. She worried most of all that her running might preempt another candidacy that could better defeat the impending Duterte dynasty.

Some people might advise her that if she’d just paddle out into the sea in the meantime, she might catch the wind better. Even a small gust of wind that puffs her sail up will buoy the spirits of those who await her leadership and will paddle their boats to join her.

What might that fortuitous wind be? Ninoy’s sacrifice was eventually the wind that filled Cory’s sail for the presidency. When Cory died, that was the wind that filled Noynoy’s sail. When Jesse Robredo met a tragic accident, the nation was bereaved, but that gave Leni the push into politics. When FPJ died, that propelled Grace Poe to run for the Senate and later the presidency. These were riveting events the Filipino mind translated into tenacious hope and optimism.

One does not always wait for the wind to get to the presidency. One can create it. The consummate wind-maker was Ferdinand Marcos. He eliminated Julio Nalundasan in 1935. He claimed fake war medals in 1962. He tantalized the nation, both the rich and poor, with purported ownership of the Golden Buddha and the Yamashita Treasure. He stoked the flames of student activism and the communist insurgency in the late 1960s and early 1970s so that he could douse them later. He conspired with Juan Ponce Enrile to stage the fake Enrile ambush to justify the declaration of martial law in 1972.

VP Leni will not create the wind. Maybe the wind is there. A presidential candidate should be able to operate on three theaters: the theater of grand visions and strategic actions (the “cathedral”), the theater of systems design and improvement (the “liturgy”), and the theater of engaging the people (the “communion”). Theater one is for the whole nation; theater two is for the concerned citizens, patriots, workers, and volunteers willing to help; and theater three is for those who cannot help themselves. It seems to me VP Leni has mastered the third theater but has not demonstrated presence in the other two.

The self-help and mutual help that Robredo has demonstrated she can make happen is something that communities themselves can arguably do for themselves. We keep hearing that Leni Robredo is an economist. Whether she is running for the presidency or not, can she offer a lofty and long-term documented macro-socioeconomic vision (a “cathedral”) that the nation’s economists can engage, embroider, and enrich?

It will take three to six presidential terms, as in a relay, but VP Leni can promise a cathedral. Present an engaging perspective plan, and lay the foundation during the initial term. Make 1Sambayan a long-term political mechanism for lining up an indicative list of presidentiables (include Vico Sotto) and multi-stakeholder supporters (like Fidel Ramos’ People’s 2000) over the next six terms. In the first term, deliver low-hanging fruits. Empower local government units (LGU) to respond to the needs of their people. Prime them with the Mandanas ruling funds (LGU internal revenue allotments could grow 55 percent to P1.08 trillion in 2022) so they can emulate innovations like Mayor Fernando Mesa’s Makapuno Island initiative in Alabat, Quezon, or Governor Mic Petilla’s Villaconzoilo Farms initiative in Jaro, Leyte.

VP Leni has shown integrity, good executive management, and deep concern for the people. But she has declined to give the people the “extravagant” hope that she could dramatically make their lives better. However, Filipinos would rather have a lotto ticket than have meals for the day. May 2022 is not a battle for stomachs. It is a battle for minds.