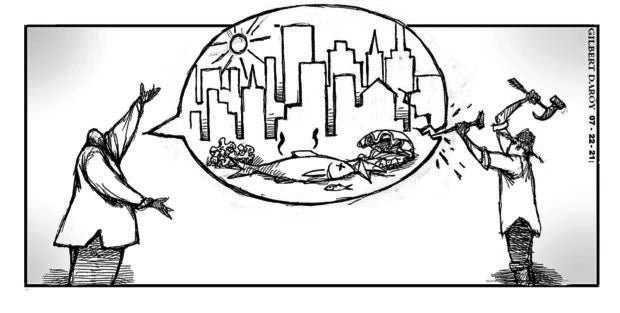 Residents of Dumaguete City are up in arms over a massive offshore reclamation project being spearheaded by their local government. Voting 6-3, the Dumaguete City council last week approved a motion authorizing Mayor Felipe Antonio B. Remollo to forge a joint venture agreement with Quezon City-based construction company E.M. Cuerpo Inc. on the proposed P23-billion Dumaguete Smart City Reclamation Project, which aims to add 174 hectares of reclaimed land to the current city coastline.

The aim, according to the mayor, was for Dumaguete to have its own “mini” BGC (the Bonifacio Global City in Taguig). The city council registered “no objection,” and enumerated the windfall benefits to be reaped from the project: It is “a permanent and sustainable solution to our perennial problems of unemployment, brain drain/migration of workers.” It will upgrade Dumaguete City from a third class to a highly urbanized city with new commercial residential areas, business hubs, and modern hospitals, plus the city “will earn tremendous revenues from business taxes, real property taxes from locators” that will in turn bankroll free hospitalization, housing and food, and utilities subsidies.

The proponents also took pains to assure alarmed citizens that the view of the sea from the picturesque promenade on Rizal Boulevard, the pier area, and the beach of the 120-year-old Silliman University “will not be obstructed” by the reclamation project. 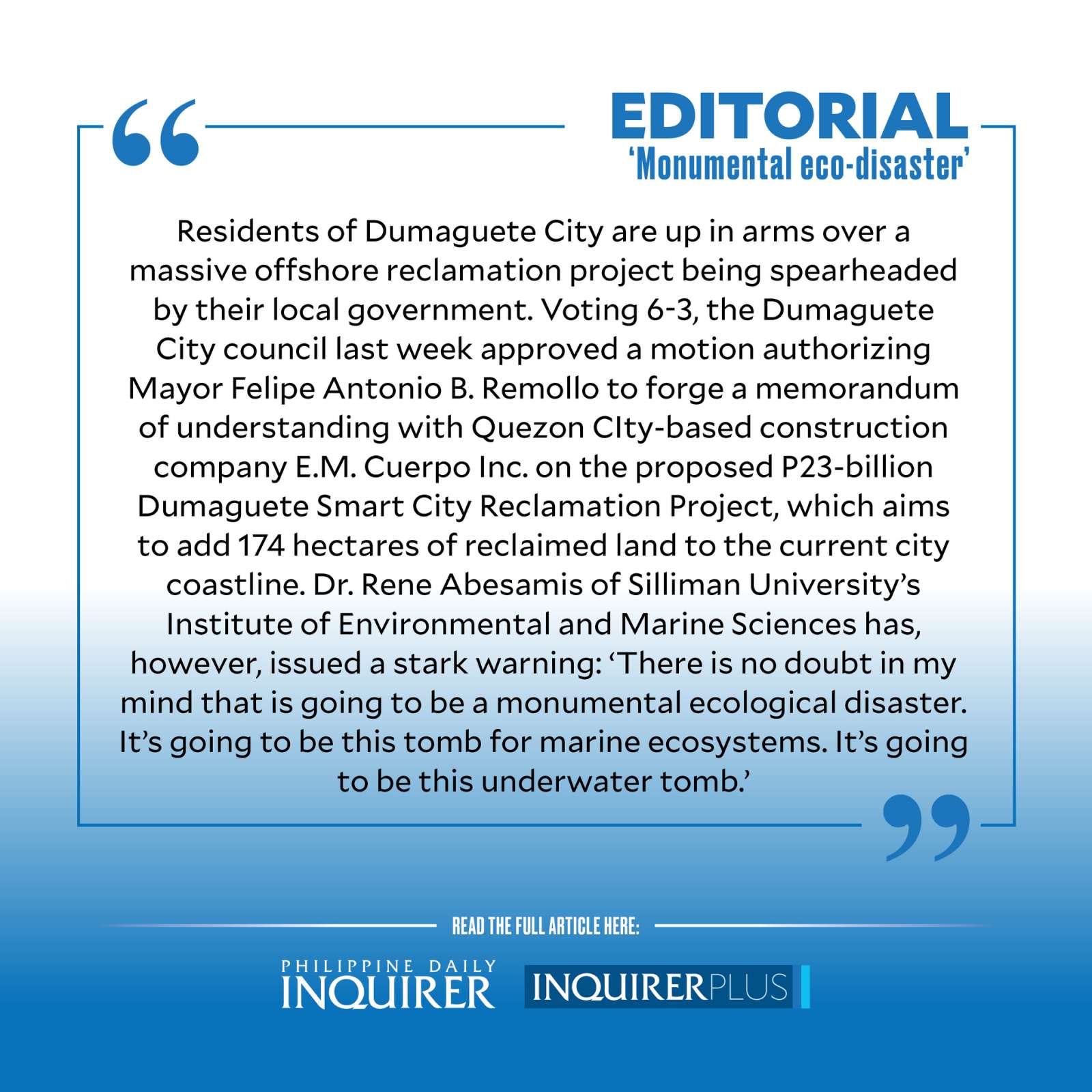 He has been joined by residents, scientific experts including former Environment Secretary Angel Alcala, and cause-oriented groups in expressing grave concerns about the project, beginning with its outsize scale (per Abesamis, the area would be “equivalent to maybe 4,000 basketball courts, 10 Lunetas” and would occupy 85 percent of Dumaguete’s coastline) and the impact it would have on the local marine ecosystem and the very character of the compact, idyllic capital of Negros Oriental.

An online petition has already been launched to pressure the city council to drop the Smart City project, as it will “directly destroy, literally bury” the remaining coral reefs, seagrass, and marine habitats that support the livelihood of local fishermen, as well as adversely affect four marine protected areas (MPA). The objectors, among them the current and former presidents of Silliman University, said that “If the project pushes through, Dumaguete City will renege on its commitment to do its part in marine conservation for the province, region and country. It will be a disgraceful act considering that the MPA movement in the Philippines, known throughout the world for its successes in the past 40 years, has its roots in Dumaguete City.”

Residents have slammed the lack of transparency and adequate public consultations surrounding the project, which was first proposed in November 2019 via an unsolicited proposal by E.M. Cuerpo. The Diocese of Dumaguete said in its open letter to architect Celerino S. Cuerpo that the technical processes involved in the study “have been found wanting in as far as environmental and public interests are concerned.”

The Negros Oriental provincial board found the clamor against the project so loud that it issued a resolution asking the Dumaguete City Council to defer and reevaluate the project to give way to further studies by scientific and environmental experts. “The consent and authority given by the city council of Dumaguete to the city mayor to enter into such agreement was hastily done and ostensibly decided on without the exercise of due diligence,” said the board. Thus, “people now feel betrayed for having been bypassed in this matter of great concern.”

Changda Overseas Engineering Co. to undertake the actual reclamation—even if the Chinese firm has no license to operate in the Philippines from the Philippine Contractors Accreditation Board, and is not registered with the Securities and Exchange Commission.

The dream “to have a mini-BGC” is a “misguided aspiration” held by many city leaders, pointed out architect and urban planner Paulo Alcazaren in a Facebook post. “Dumaguete is a third-class city of only 150,000. What would be good is if we could create developmental directions for these secondary and third-tier cities that are more sustainable, equitable and inclusionary, learning all the obvious lessons from the hot mess that Metro Manila and Metro Cebu have made of themselves.”