When grades mean nothing and everything | Inquirer Opinion
Close
menu
search

When grades mean nothing and everything 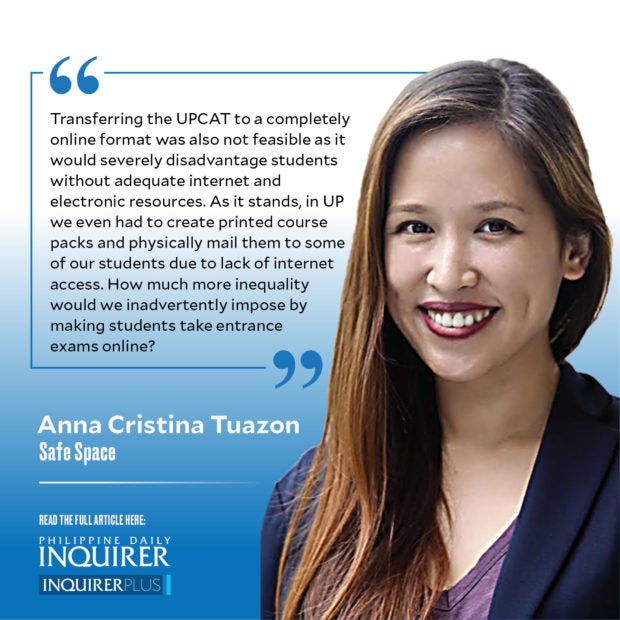 Grades have never been a poorer reflection of students’ true capabilities than this past year. And never have they mattered more.

Most college entrance examinations were removed this year due to the pandemic, one of which was the University of the Philippines College Admission Test or UPCAT. Over 90,000 hopefuls used to take this test every year in over 90 testing centers across the country, administered by over 1,600 testing personnel. Undertaking such a process was logistically impossible in a pandemic given the heavy amount of traveling that would be required as well as having to gather schoolchildren in clustered spaces. Transferring the UPCAT to a completely online format was also not feasible as it would severely disadvantage students without adequate internet and electronic resources. As it stands, in UP we even had to create printed course packs and physically mail them to some of our students due to lack of internet access. How much more inequality would we inadvertently impose by making students take entrance exams online?

Due to this dilemma, the only remaining criterion for admitting students was through their past academic performance in the form of grades. It was a relief for some whose anxiety about preparing for college entrance tests fueled many sleepless nights. It was a disappointment for others who were relying on a strong performance in these exams to compensate for the academic ups and downs of the past years. It also meant that, for better or worse, these students’ fates were sealed prior to their application.

The UP admission results went viral recently on social media, driven by the tens of thousands of students who weren’t accepted. The grades-only approach also disadvantaged schools who imposed much stricter standards for grades, as seen by the shocking drop in the passing rate of students from science high schools, all government scholars with full expectation of making it to UP. I saw numerous posts of students relate their worth to the results. I also saw some refusing to be defined by their grades and knowing that there is still valuable learning to be had outside of the Big Four.

In academic advising, we caution students against being too “grade-conscious” or GC. We encourage students to prioritize learning over obtaining top grades. There is an activity I use in therapy called The Scoreboard Metaphor by Gammon & Stoddard. I use it to help clients differentiate between goals and values. Goals are the score on the scoreboard while values are how they play the game. If you are offered a win without having to do anything, would you do it? If so, then your goals are more important. But if you still prefer to play the game, even without a guarantee of a win, then you follow your values. In this way, grades are merely goals while learning is the true value.

We also try not to put too much weight on grades because they are an imperfect measure of learning. The score on an exam is brought about by many factors beyond what the student actually learned. Testing conditions matter greatly. Their scores are impacted by how much sleep they got the night before. It is even influenced by room temperature, the comfort of their seat, or if they’re seated next to a window. Scores are also affected by past performance. Experience success and you’ll feel more confident in the next challenge. Failure can either make you more determined or make you lose faith. Anxiety is a key factor in performance as well. Most people that claim to be poor at math, for example, are actually hindered more by math anxiety rather than lack of ability. Grades are also influenced by the school you belong to. Some schools would grade every single task. Others would grade on a curve. Others, still, pride themselves on almost never giving a high grade.

The pandemic has made grading even more of a mixed bag due to the extraordinary stress that students are put in when classroom learning had to suddenly shift to brand-new modalities. Administrators recognize this and signed off on unprecedented guidelines such as no-fail policies, automatic passes, or not including grades received this year in their grading average.

Nevertheless, we still ended up relying on grades to determine students’ college future. Grades don’t seem to matter until they do.

Read Next
Learning from an awakened dragon
EDITORS' PICK
Filipinos celebrate PH’s first gold medalist Hidilyn Diaz
Harnessing technology for quality education
Hidilyn Diaz wins weightlifting gold in Tokyo Olympics
‘I believe’: Hidilyn Diaz bucks the odds to win historic Olympic gold
Connect to PH’s fastest network with new Signature Plan Lite at only P599 per month
Tips for a cheerful life
MOST READ
Hidilyn Diaz wins weightlifting gold in Tokyo Olympics
Go to war with China over West PH Sea? It will be a ‘massacre’, says Duterte
FLASHBACK: The day Hidilyn was shocked over inclusion in oust-Duterte matrix
Hidilyn shoots not only for gold but also for permanent place in PH sports history
Don't miss out on the latest news and information.