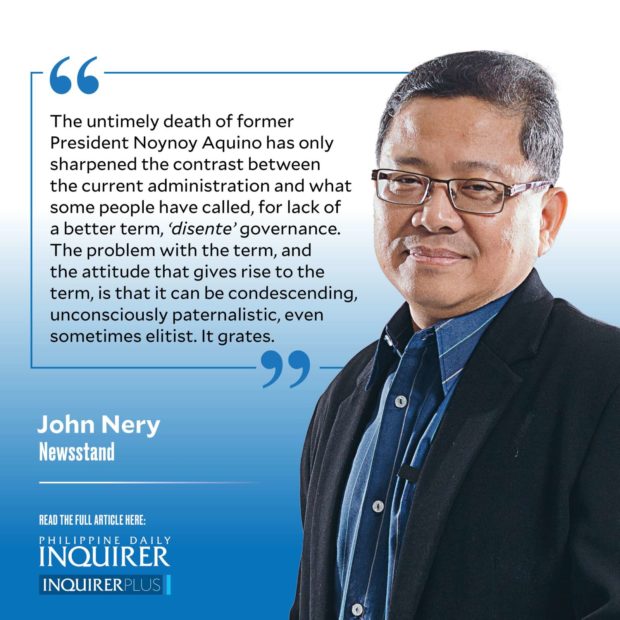 If memory serves me right, Vicente “Ting” Paterno ran for the Senate in 1987 on a simple campaign theme. While his track record was clear and clean, it was also complicated; he had served as a minister in Ferdinand Marcos’ presidential-parliamentary Cabinet, before becoming an independent assemblyman, then Metro Manila chair of the National Citizens’ Movement for Free Elections, then one of “Cory’s Candidates” for the Senate.

His campaign poster cut, or melted, that Gordian knot of complication with a warm but also accurate slogan: “Ting Paterno. Mabuting tao.”

As I have argued before, Cory Aquino had the longest coattails in Philippine history; in that first election for the Senate since the fall of the Marcos regime, 22 of her 24 candidates won. Paterno was one of the non-politicians who rode those same coattails; like them, he also had an impressive personal reputation, backed by a sterling curriculum vitae, that recommended him to the voter. In 1987, the only time he ran for national office, 9.6 million voters cast their ballot for him.

I am reminded of this virtually forgotten moment in history because it might have something to say to us today. Ten months before the first vote is cast, I’ll step out on a limb (again), and suggest that the 2022 elections will be about change.

If correct, this is good for the political opposition — even though they will share this message with other politicians and political parties. Those allied with President Duterte since the start, such as Senate President Tito Sotto and Sen. Ping Lacson, have consolidated their strategy to put some legitimate distance between themselves and the President. The President himself has inexplicably decided to go to war against the one politician who can divide the President’s own Mindanao base; if Sen. Manny Pacquiao decides to run for the presidency, he will not position himself as opposition (he will not attack the President directly); rather, he will self-identify as someone more deeply committed to the President’s own program—which, seen through the surrealist prism of Philippine politics, effectively turns him into a change candidate.

How will the opposition position itself? It’s becoming clearer by the week that the only real and viable option for the political opposition is Vice President Leni Robredo running for president. All other options carry the serious risk of triggering disunity and a free-for-all.

Part of Robredo’s appeal is that she is an excellent executive. Despite having one of the smallest budgets of any government agency, the Office of the Vice President (OVP) has (to borrow another boxing metaphor) punched well above its weight. The OVP’s performance during the pandemic has been nothing short of extraordinary; the budget hearings last year allowed lawmakers to put their praise on the record. She appeals to those who want the opposite of the incumbent.

The untimely death of former president Noynoy Aquino has only sharpened the contrast between the current administration and what some people have called, for lack of a better term, “disente” governance. The problem with the term, and the attitude that gives rise to the term, is that it can be condescending, unconsciously paternalistic, even sometimes elitist. It grates.

But the phrase “mabuting tao” (a good person) doesn’t seem to carry all that extra baggage. To be sure, I am Bisaya, but growing up in Metro Manila in the ‘70s and ‘80s, “mabuting tao” seemed to me to be a genuine compliment, the more effective (and affecting) because it wasn’t reaching for superlatives. I had the chance to meet Senator Paterno a number of times, and he truly was “mabuting tao” — in exactly the same way that fisherman Ka Virgilio Santos of Hagonoy, Bulacan, who hosted me in 1985, was; in the same way that Myrna Aboniawan, now Siose, of Cagayan de Oro, who works with Archbishop Emeritus Antonio Ledesma, is; in the same way that Doc Leslie Manalo Medina of Holy Angel University, or Elin Guro of Mindanao State University in Marawi, are. The list is endless — and that’s the hopeful thing.

However, I understand “mabuting tao” also in the late interior secretary Jesse Robredo’s terms; that is to say, not only good but also competent. In his phrasing: “matino at mahusay.”

It is precisely for this reason that Sen. Kiko Pangilinan’s decisive action to sue YouTube channels “Starlet” and “Latest Chika,” as well as Google Philippines’ country manager Bernadette Nacario, for highly defamatory and completely fabricated videos against him and his wife, the megastar actress Sharon Cuneta, inspires me. To reclaim the life that is worthy of the best of us, we must not only be good people; we must also be smart, daring, effective.

This was a risky action, because it invites even more trolling against the opposition senator and because Google, which owns YouTube, has immense resources. It is literally a trillion-dollar company. But the move is welcome. It puts the onus on Google and YouTube to clean up their act, and it sprays those fetid channels with the disinfectant of daylight.

Read Next
Farewell, my furry friend
EDITORS' PICK
Connect to PH’s fastest network with new Signature Plan Lite at only P599 per month
Duterte warns of possible lockdown if ‘more aggressive’ Delta variant spreads
Hidilyn Diaz wins weightlifting gold in Tokyo Olympics
Harnessing technology for quality education
Duterte: When I said I will fight drugs in 6 months, I thought it was like in Davao
Tips for a cheerful life
MOST READ
Hidilyn Diaz wins weightlifting gold in Tokyo Olympics
Hidilyn shoots not only for gold but also for permanent place in PH sports history
Go to war with China over West PH Sea? It will be a ‘massacre’, says Duterte
Duterte acclaims Sotto: ‘He can become a good vice president’
Don't miss out on the latest news and information.