The long and difficult road to justice. After more than 20 years, eight Philippine Navy officers and seamen were cleared by the Supreme Court over charges of grave misconduct in the case involving the death of Ensign Philip Andrew Pestaño. Last September 1995, Pestaño was found dead with a gunshot wound in his head, in his cabin on board the BRP Bacolod City. The Navy ruled the death as suicide. In November 2020, Manila Regional Trial Court Judge Hannah Arriola dismissed murder charges against the same individuals.

The World Bank recently published a report “Improving Student Learning Outcomes and Well-Being in the Philippines. What are International Assessments Telling Us? (Vol. 2) Synthesis Report Presentation.” The report raised howls of protest from Department of Education (DepEd) officials with Secretary Leonor Briones saying “the country was insulted, was shamed. We expect and look forward to a public apology.” The report noted, among others, that more than 80 percent of Filipino children “do not know what they should know” because of “limited proficiency in the language used in instruction” as well as an “unacceptably poor school climate…” Her call for an apology was supported by Finance Secretary Carlos Dominguez III.

Last July 8, World Bank Philippines issued an apology. The statement in full makes for interesting reading but the first two lines say it all. “We deeply regret that the report on education was inadvertently published earlier than scheduled, and before the Department of Education had enough chance to provide inputs. This was an oversight on our part and we conveyed our personal apologies in our communication with the government…“ It continued saying that steps have been taken to temporarily remove it from the website. 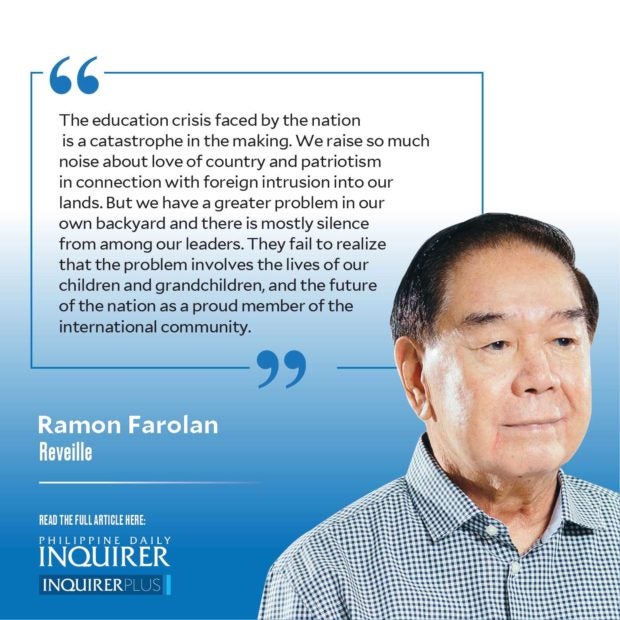 Normally one should feel elated or vindicated when an apology is issued after criticisms are made against us. But somehow I am saddened by the apology. It apologized for style rather than substance. There has been no outrage from the Senate or the House of Representatives. No one has called for an investigation which is the usual practice although at this point when we are again focused on an upcoming presidential election, perhaps such a review might not be of much interest to anyone. The education crisis faced by the nation is a catastrophe in the making. We raise so much noise about love of country and patriotism in connection with foreign intrusion into our lands. But we have a greater problem in our own backyard and there is mostly silence from among our leaders. They fail to realize that the problem involves the lives of our children and grandchildren, and the future of the nation as a proud member of the international community.

Unfortunately, for Briones this negative report on Philippine education has come up on her watch and so, she finds herself in the unenviable position of having to answer for them. But the truth is we have been on this long journey to nowhere for sometime now. Things do not just develop overnight and suddenly happen. At least, Briones allowed us to discover how poor is the quality of education being provided by government to our young people in public institutions.

There are other World Bank reports on Philippine education. One is on the quality of basic education services and the strength of existing systems used to allocate and manage resources. Two of its key findings are on teachers and school infrastructure: On teachers, the availability of teachers in schools has improved as a result of recent teacher hiring efforts. However, there are signs of growing inefficiency in teacher development because of weaknesses in teacher allocation systems. Teacher absenteeism rates in elementary and high school are generally low compared to other countries. However, they tend to be high in highly urbanized centers. There have been big improvements in the hiring process but significant delays still exist. Teacher performance on current knowledge assessments is poor and professional development systems are inadequate.

On school infrastructure, the availability of key facilities has improved but classroom deficits still remain. Public infrastructure improvement systems suffer from many problems which result in poor quality and incomplete classrooms and water and sanitation facilities.

In simple terms, teacher quality and classroom facilities are in need of greater spending and attention.