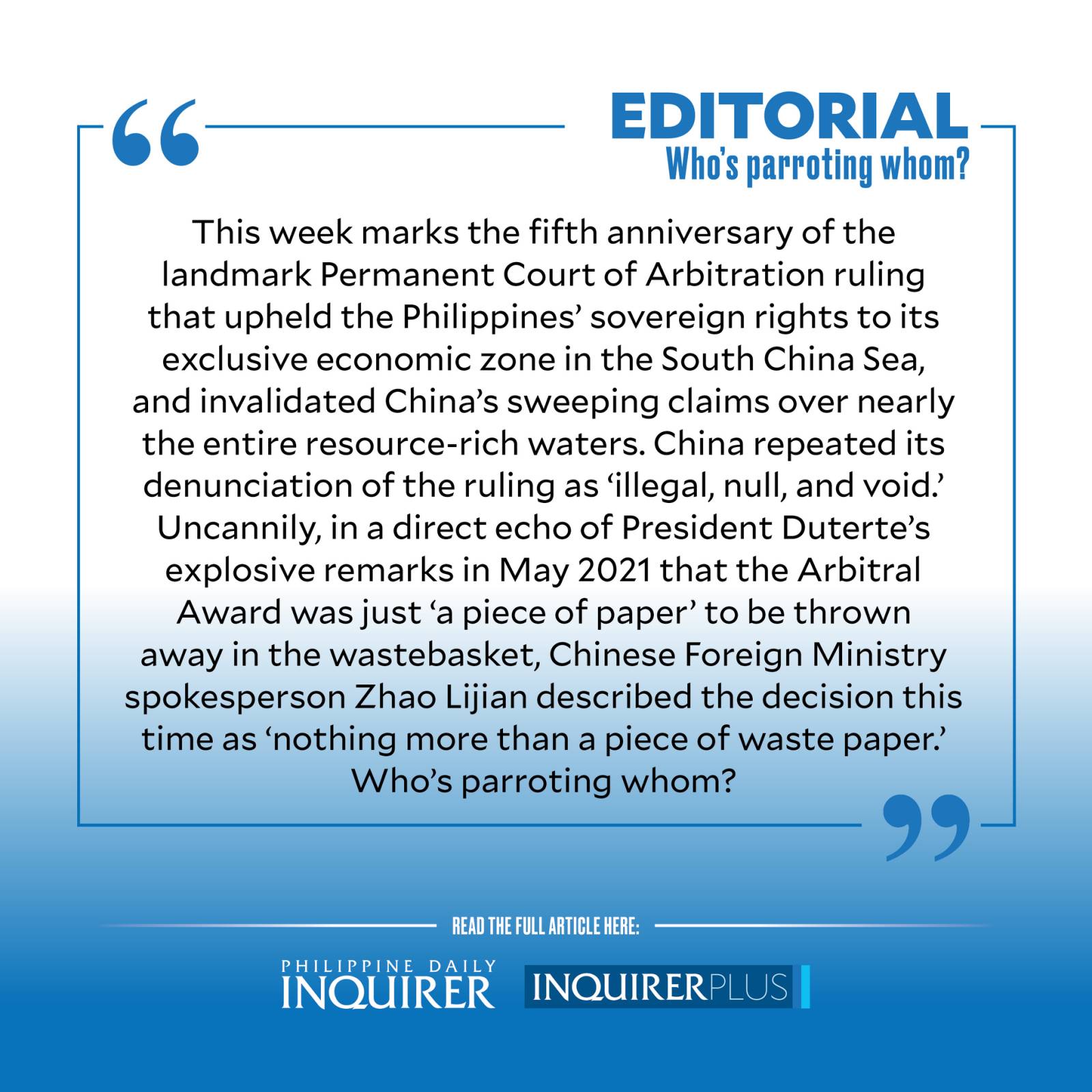 This week marks the fifth anniversary of the landmark Permanent Court of Arbitration (PCA) ruling that upheld the Philippines’ sovereign rights to its exclusive economic zone in the South China Sea (SCS), and invalidated China’s sweeping claims over nearly the entire resource-rich waters. The win, handed down on July 12, 2016, is a towering legacy of former president Benigno Aquino III’s administration, which filed the case in 2013 following a standoff with China at the Scarborough Shoal.

So how did Malacañang celebrate what should have been the triumph of the rule of law and the victory of the Philippines in an international tribunal? By once again coming to China’s defense, and belittling the complaints of Filipino fishermen that they remain unable to access their traditional fishing grounds due to Chinese interference.

Asked about the statement of the fisher group Bigkis ng Mangingisda, representing hundreds of small Filipino fisherfolk, that they “are still forbidden by the Chinese Coast Guard to enter and fish inside Bajo de Masinloc/Scarborough Shoal… and surrounding areas of Luzon and the Kalayaan Island Group,” presidential spokesperson Harry Roque responded not by taking up the cudgels for his distressed fellow Filipinos but with a blunt “I dispute that.” “Whoever said it must not be reporting the truth,” Roque insisted, adding that he has “personal knowledge” of the fisherfolk’s situation because he was the former lawyer of some of them (“Ako lang naman ang tumayong abogado ng mga mangingisda galing sa Masinloc, galing sa iba’t ibang bahagi ng Pangasinan…”). Which begs the question: What happened to him?

But Roque’s words and those of the Masinloc, Zambales mayor, who also downplayed the fisherfolk’s claims, cannot blur China’s well-documented abuse and bullying of those whom it considers interlopers in the SCS. Two years on, for instance, the aggrieved fishermen of the small fishing boat Gem-Ver 1, which a Chinese vessel rammed and sank off Recto Bank in June 2019, leaving the fishermen floundering in the open sea, have yet to receive recompense for a year’s loss of livelihood.

The short shrift Malacañang gave the Filipino fishermen’s plaints seemed of a piece with the rote denigration of the Arbitral Award by the other party, China, which repeated its denunciation of the ruling as “illegal, null, and void.” Uncannily, in a direct echo of President Duterte’s explosive remarks in May 2021 that the Arbitral Award was just “a piece of paper” to be thrown away in the wastebasket, Chinese foreign ministry spokesperson Zhao Lijian described the decision this time as “nothing more than a piece of waste paper.” Who’s parroting whom?

Against this recalcitrance by Beijing and the Duterte administration to give full weight to the milestone PCA ruling, other countries—among them Japan, Australia, and United States—have gone ahead and recognized the Arbitral Award, expressing support for the country’s historic win and cautioning China against further provocative actions in the SCS. Canada voiced concern over Beijing’s “escalatory and destabilizing actions” in the area, while the US again warned China that an attack on Philippine armed forces in the SCS would trigger a response based on the 1951 US-Philippines Mutual Defense Treaty. The US, said Secretary of State Antony Blinken, “would act to meet the common dangers (to both parties in the treaty) in accordance with its constitutional processes.”

Five years on and the Award has only grown in stature and implications on the local and international fronts. Recent weeks have seen a chorus of different groups—fisherfolk, business leaders, retired soldiers and alumni of the Philippine Military Academy, legislators, students, scientists, lawyers, civic groups—speaking up against China’s intrusive presence in the West Philippine Sea and the President’s defeatist and “inutile”—Mr. Duterte’s own words—stance on the issue.

A consolation was Foreign Secretary Teodoro Locsin Jr.’s statement declaring the Award a “milestone” that “conclusively settled” the Philippines’ historic rights and maritime entitlements in the SCS. The ruling is “final,” he said, and cannot be “erased from law, history, and our collective memories.”

How to strengthen and enforce that ruling in the face of China’s repeated acts of disrespect? Just this week, the US-based group Simularity, which specializes in geospatial analysis and provides satellite data imagery, revealed that hundreds of Chinese ships have been dumping raw sewage every day for several years now on Philippine reefs, causing massive damage to Philippine waters. Malacañang’s response so far? It is verifying the report, said Roque, and according China “the presumption of good faith.” As always, the earnest, eager-to-please pose.