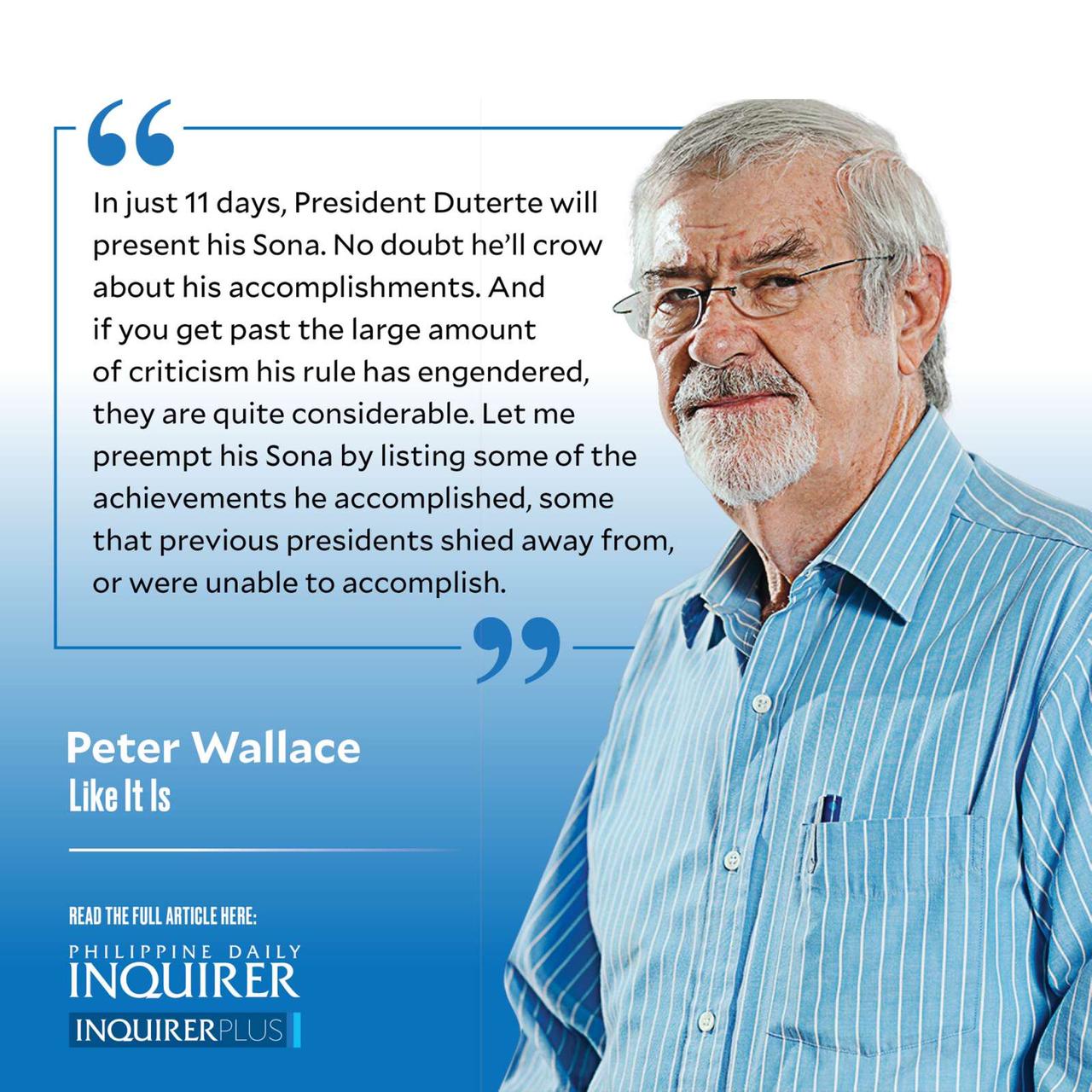 In just 11 days, President Duterte will present his State of the Nation Address (Sona), with some relief that it’s all almost over. No doubt he’ll crow about his accomplishments. And if you get past the large amount of criticism his rule has engendered, they are quite considerable.

The criticisms mainly center around his handling of China’s illegal incursions into our seas, the brutal handling of the drug menace which resulted in human rights violations, the slow-moving rehabilitation of wartorn Marawi City, his attacks on the press particularly on ABS-CBN and Rappler, and the poor handling of the pandemic.

Let me preempt his Sona by listing some of the achievements he accomplished, some that previous presidents shied away from, or were unable to accomplish.

He gave the Moros the autonomy they demanded, paving the way for the creation of the Bangsamoro Autonomous Region in Muslim Mindanao.

With the support of Congress, he reduced our personal income taxes, even eliminated them for lowly paid workers. He lowered corporate tax to 25 percent for the big guys, and 20 percent for small businesses. He revised the incentives offered to companies to make them more in line with what investors really want, while not needlessly throwing money away.

With initially the active leadership of Eli Rio, and now with the widely experienced former senator Gregorio Honasan II and some highly experienced undersecretaries and assistant secretaries, he built the Department of Information and Communications Technology (DICT) into a major force in the Philippines as it enters into the rapidly evolving new digital world. The DICT is at the center of building a digitized government and digital savvy community.

The President’s creation of the Anti-Red Tape Authority (Arta), managed by the disciplinarian Jeremiah Belgica and chaired by the competent Department of Trade and Industry (DTI) Secretary Ramon Lopez, gave the DICT the teeth it needed to enforce digitalization on reluctant agencies. The three agencies — DICT, DTI, Arta — are working well together to make it easy for companies to do business with government.

He provided universal health care — that some corrupt officials in PhilHealth then screwed up. It is now being fixed by the no-nonsense former NBI head, Dante Gierran.

Free tertiary education was provided to all, and tied into it was the Balik Scientist Act to assist returning Filipino scientists.

Mr. Duterte had the courage to free up rice from the shackles of a grossly incompetent National Food Authority (NFA), and let the market decide. The rice tariffication law removed quantitative restrictions on rice imports and replaced it with tariffs, some of which will go to the P10 billion rice competitive enhancement fund.

But probably one of his greatest and most long-lasting legacies will be the “Build, build, build” program. His government more than doubled the percent of GDP spent on infrastructure and elicited foreign government and private sector support for 112 major projects. An essential if you want business to grow, and people to have communities they can live in.

So what’s he going to achieve in his final months? Let me focus on just one action that will most assist business to grow: getting Congress to act. It’s business and it’s confidence, or lack of it, that will pull the country out of the morass COVID-19 created. If we want to get back to normal (the new normal COVID-19 created), it’s business that will do it. So supporting and providing what business needs must be top of the list.

First is to finish the long-neglected reform of our tax system—the Passive Income and Financial Intermediary Taxation Act and the Real Property Valuation Reform. Also, amendments to the Public Services Act, Foreign Investments Act, Retail Trade Liberalization Act, and the Government Financial Institutions Unified Initiatives to Distressed Enterprises for Economic Recovery bill (GUIDE). Other important bills that Congress should focus on, with his urging, are the build-operate-transfer law amendments, freedom of information law, and bank secrecy law amendments. He should get the Senate president and House speaker to agree on a timetable, and meet fortnightly through Ledac (Legislative-Executive Development Advisory Council) to monitor accomplishments.

The business community has a list of 17 priority bills. But let’s be realistic, we have three months before politics kicks in to overwhelm everything. All those bills are long enough along the way to be completed in these remaining months. They can revolutionize doing business and, importantly, in attracting new business. If our legislators truly care about the future well-being of the people they represent, they’ll pass those laws.

It’s usually a given that as a president nears the end of his/her term, they become lame duck figures. But with an astounding 91-percent approval rating, and a disorganized opposition, Mr. Duterte’s power can well remain. So he can still get results out of Congress.

TAGS: Like It Is, Peter Wallace, Rodrigo Duterte, Sona