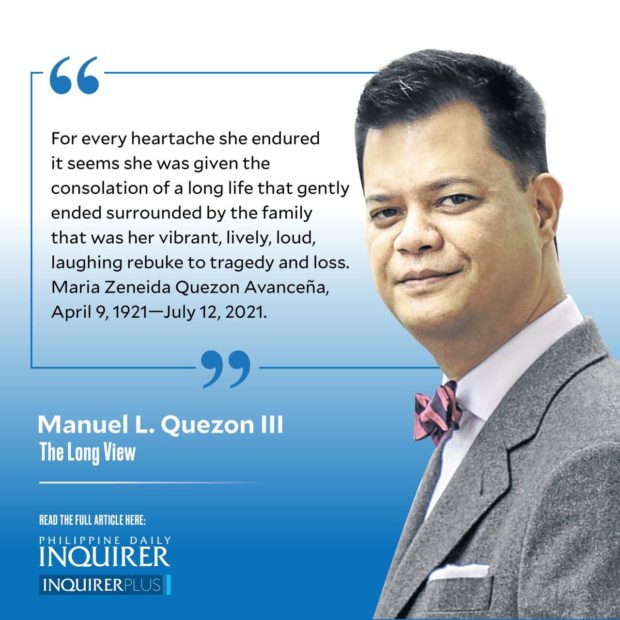 On the eve of her 100th birthday, which, since 1942, coincides with Bataan Day, Raffy Evangelista shared a story handed down by veterans of the war. They said that in Corregidor, in between the bombings and bombardments, they would see a girl combing the beach, looking for discarded cigarettes from earlier days of plenty, or perhaps by chance washed up on shore from the many ships already sunk in Manila Bay. That girl was Nini, and the soldiers were touched, because she was the daughter of their commander in chief, and because the cigarettes were for them, who no longer had any.

The first part of the story of her life spans many places, from the Pasay of her youth — the only child born at home — to prewar Malacañan Palace, then the hegira to America, by submarine, PT boat, and steamship—then the loss of her father while still in office, to their return home again to a shattered nation, and her becoming the young wife of an up-and-coming former journalist turned pioneer diplomat; vivid, with peaks of triumph and valleys more than enough for any single life; for hers was to be a life accompanied, more than most, by sudden death: the muffled drums of state mourning for her father, or the quiet shuffling of feet as the throngs paid their respects before the sealed coffins of her mother, elder sister, and her first husband, slain in a lonesome dusty road on the way to their hometown.

That was the first half of her life, but only the first stage. She would remarry; her first two children by her first husband would be followed by seven more by her second, though she was only 60 when she was widowed for the second time. It was also, after an initial interlude of domestic contentment, her second public life, in which the paths of the parliament of the streets had now become every bit as familiar to her, as the halls of stately homes and the palaces of state had been in her former life. Her white hair became as familiar to that generation of freedom-fighters, as her mother’s had been, to the wartime generation.

She’d been named after her maternal grandmother; a fierce lady with flashing eyes; her contemporaries in UST (she was summa cum laude in the Class of 1940), according to the Varsitarian, commended her “simplicity in spite of circumstances.” A fiery simplicity: just two facets, combined with a laugh and smile never being far away, proving there were many Ninis to many people, and they will have these things in common: her bluntness without cruelty or incivility; her deep faith without false piety or drama; her love of laughter and appreciation of wit; her uncompromising love of country and liberty, whether contesting dress codes for students, or visiting political prisoners in their jail cells, or lending her name to causes that counted.

To me of course, she was Tia Nini, the one who, in many ways, as a young widow also had to step in — or step up — to take care of her younger brother, my father. All her life she had an abiding compassion for him, who felt the burden of expectations so keenly; and when he passed she took me in, to help get me steady on my feet for adult life.

To the contemporaries of her father and his era that I still reached, she was the laughter-filled symbol of former golden days; to Filipinos from all walks of often cause-oriented lives, she was, before the term gained currency, an ally, and ever-respected because of that; to me she was a sharer of memories, the one who could tell a story about being mesmerized by seeing the Hope Diamond around a society hostess’ neck with as much humor as the moment she was arrested by a team that included Panfilo Lacson; a source of practical but never cynical advice; a principled idealist whose anguished conversations with Jose W. Diokno, as she and he discussed what they should do — they would all resign in protest over the Mendiola massacre — I overheard as she was visiting us in America; and who held me in her arms as I sobbed after we buried my father.

For every heartache she endured it seems she was given the consolation of a long life that gently ended surrounded by the family that was her vibrant, lively, loud, laughing rebuke to tragedy and loss.