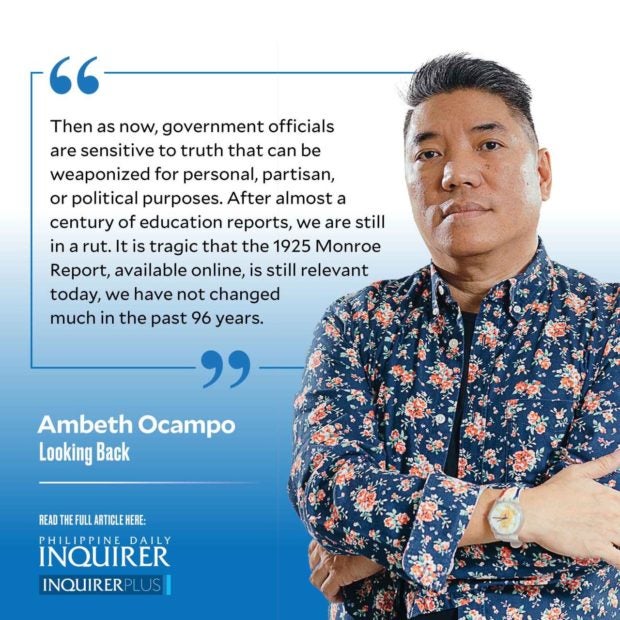 During President Duterte’s last televised address, Education Secretary Leonor Briones announced that the World Bank gave in to her demand for a public apology, following its premature release of an unfavorable report on the current state of Philippine education. That is the spin. In reality, the apology does not change the substance and recommendations of the report. Secretary Briones authorized Philippine participation in the 2018 Programme for International Student Assessment, and when the negative report was made public in 2019, the Department of Education (DepEd) was ready with a spin. Nobody doubts that DepEd is doing its job, the question is how can we do better?

Reading the 1925 Monroe Commission report on Philippine education I was struck by the opening lines: “The Board of Educational Survey is not unmindful of the consequences which may result from its frank discussion of Philippine education. There is in the report much criticism of existing conditions. This report will fall into the hands not only of persons who have at heart the welfare of the Filipino people, but also into the hands of some who may seek to reap some personal advantage from such criticism. Such an exposition may be expected to stimulate those responsible for the success of administration to the correction of defects. But it may also be used as a basis of attacks on members of the present administration by persons actuated by unworthy motives.”

Then as now, government officials are sensitive to truth that can be weaponized for personal, partisan, or political purposes.

Significant findings of the Monroe report are on the medium of instruction, the need for a common language, and bridging communication in an archipelago separated by many Philippine languages and dialects. English was introduced to replace Spanish and bring to a Malay people “Anglo-Saxon institutions and civilization…[as well as] ideals of universality, practicality, and democracy.” Universal education was recommended but one suited to the needs of Filipinos. Issues on quantity and quality of education, academic vs. social education, were noted. Not all students were suited for an academic path so there was a need for more agricultural, trade, and vocational schools.

Then as now Reading was not the problem but Literacy or understanding what is read. The 1921 Civil Service Records revealed that 98 percent failed the English composition exam. Nobody passed the 1918 exams for messengers and third-class patrolmen. In the 1922 exams for junior teachers, 87 percent of them failed. How would today’s students perform in international assessments if the tests were conducted in Filipino? How successful are our bilingual or mother tongue experiments?

In 1925, the Board found that classroom education was bookish and artificial (Filipinos were then using US textbooks alien to their lives). There was “an overemphasis on uniformity and a corresponding failure to provide for initiative and participation.” Different subjects were taught “in almost complete isolation, one from the other.” Worse, “the development of the ability to think, to meet new situations, and to solve the kinds of problems one meets in real life is neglected. The educational process here is largely the memorizing of materials in books or the developing of specific skills in formal operations or hand work.” This sounds painfully familiar.

Attention-grabbing recommendations from the 677-page report: That real property, real estate and cedula taxes be increased and devoted to educational purposes; that national government should not bear all expenses of education, that provinces and local government should share in it. “Support of the academic high school be thrown entirely upon the province, with the option that cost of instruction be born by tuition or provincial funds or a combination of the two,” it said. Non-teaching work of administrators and teachers like reports and records be simplified and reduced. Education should be insulated from politics. It further noted: “The composition of the Board of Regents of the University of the Philippines be modified by transferring the two legislative members to the Board of Visitors…”

After almost a century of education reports, we are still in a rut. It is tragic that the 1925 Monroe Report, available online, is still relevant today, we have not changed much in the past 96 years.