Why he’s running for VP 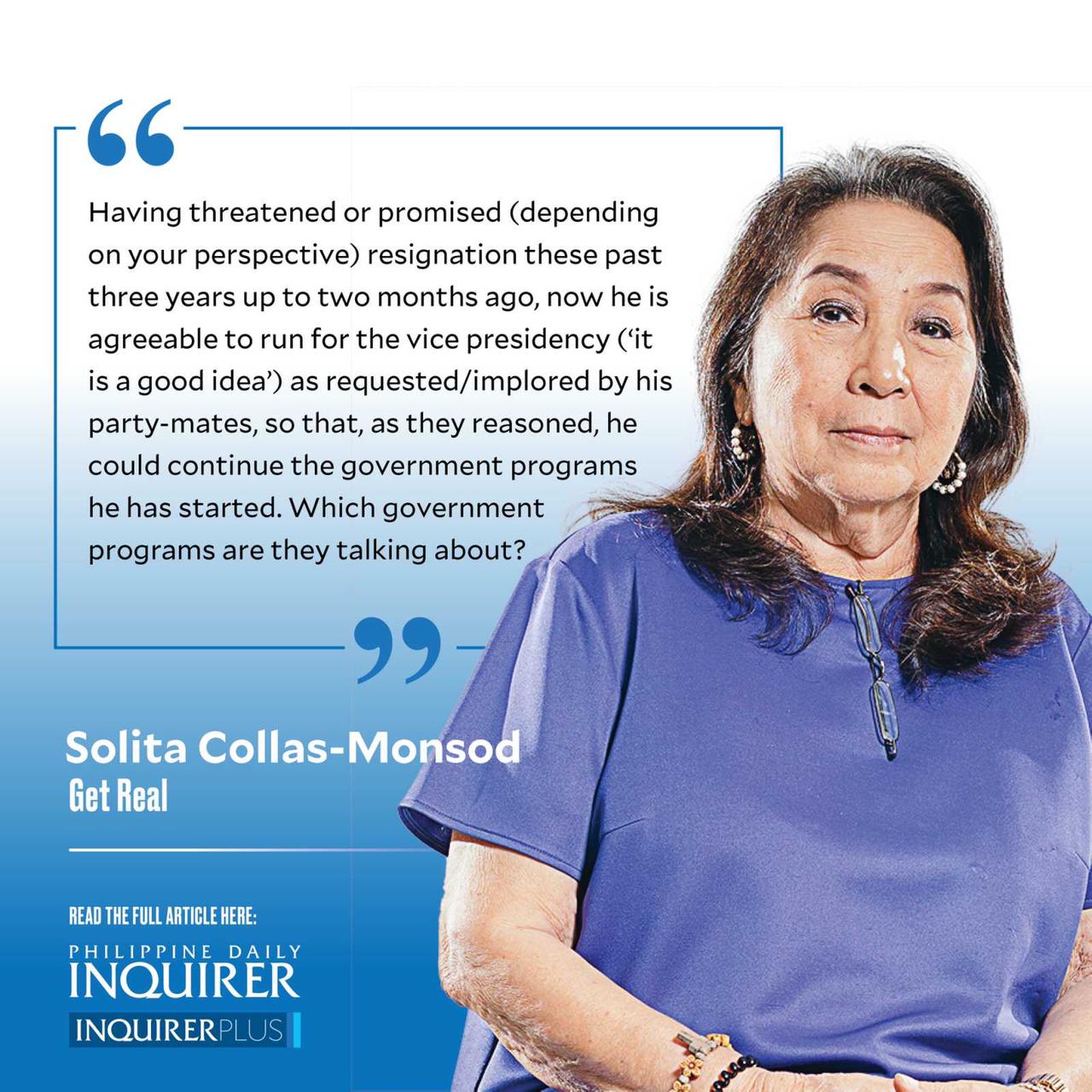 I googled the number of times President Duterte talked of resigning from the presidency. The earliest was on Aug. 14, 2018, or barely two years into his presidency, when he said: “I want you to know I am thinking of stepping down because I am tired.”

Then in May 2019, in connection with his son Paolo’s eyeing the speakership, he was quoted as saying: “Itong si Paolo, sabihin ko sa kanya (I told Paolo), if you run for speakership, let me know. Kasi kung tatakbo ka, magre-resign ako. Kasi marami na tayo (because if you’re running, I will resign. Because there’s too many of us now).” This statement is important in light of current events.

Not long after that, in July of the same year, when he was speaking to the military, he said: “Gusto ko na rin mag-resign. I am not happy anymore. You want to take over via coup? Go ahead.” Can you imagine a president publicly encouraging his armed forces to violate their oaths, the Constitution, and the laws of the land?

The following year, in September 2020, another resignation threat/promise: “I cannot fight corruption… I offered to resign as president, sabi ko kasi nagsasawa na ako… Can you stop it? You cannot. There is no way…”

The last one was in May of this year, when he said: “So ‘pag ganoon ang gobyerno ko, mag-resign na lang ako, sa totoo lang. Hindi ako atat na atat talagang maging presidente. But if I cannot at least the barest minimum of a peaceful place, then I have no reason to stay. It would be a failure. Tama, talagang failure.”

By the way, this was not the first time he said “Hindi ako atat na atat na maging presidente.” He used that sentence as early as August 2016.

So why am I going down memory lane this way, Reader? Well, you see from the reasons above that the President has given for wanting to step down or resign—he is tired (physical health), he is worried about political dynasty, he is unhappy (emotional health), he failed to stop corruption (his campaign promise was to stop it in three to six months) and faces the possible failure in achieving the “barest minimum” (which he does not define) of peace in Mindanao—not a year has passed since 2018 that he hasn’t talked about resigning.

But before I go on, it seems that every time the President talked about resigning, his aide Bong Go always came up with a statement that the President is physically and mentally fit to govern. Just Go’s word, you understand. No evidence at all. No backup statement from, say, the President’s doctor, or the secretary of health, or even the military’s top doctor. I have no idea where Go got his medical degree.

Anyway, to continue my tale: Having threatened or promised (depending on your perspective) resignation these past three years up to two months ago, now he is agreeable to run for the vice presidency (“it is a good idea”) as requested/implored by his party-mates, so that, as they reasoned, he could continue the government programs he has started.

Which government programs are they talking about? The admittedly failed war on corruption? The also admittedly failed (and deadly) war on drugs? The war on COVID-19 (no admission of failure, but the evidence is overwhelming, including for Bayanihan 1 and 2)?

Maybe they’re talking about the programs related to the Philippine Development Plan 2017-2022. Oops, not that either. The Philippine Statistics Authority’s StatDev, which monitors the success of Mr. Duterte’s plan, doesn’t seem to show much eagerness to monitor, but its latest update showed that only 33 percent of the plan’s agriculture, industry, and service targets, 30 percent of its human capital targets, and 44 percent of its social protection targets had a high probability of being achieved.

Further, is Mr. Duterte no longer tired and unhappy and frustrated, as he himself declared? Is he physically and mentally better off now?

Reader, there is no way that he will run with his daughter as president. Too many Dutertes—which would make him very uneasy. Or so he said.

So that leaves us with Bong Go as his candidate for president. That seems more like it. Perhaps with Bong Go’s undated letter of resignation from the presidency? That means that the constitutional prohibition of a second term for a president will have been successfully circumvented. Does anyone care?