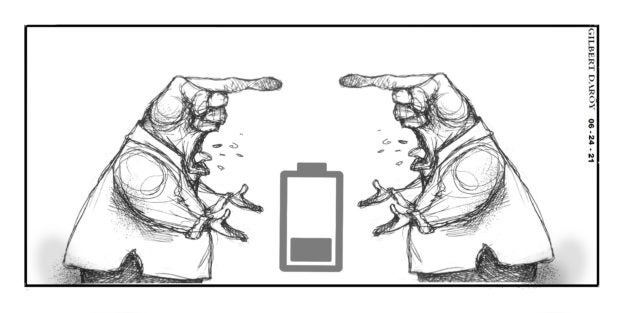 Some 339,000 households, 90 barangays, and 16 municipalities and cities across Luzon were hit by unexpected three-hour brownouts last June 1, and it is highly likely that residential, commercial, and industrial electricity users will have to endure even more expensive and inconvenient power interruptions in the weeks or months ahead.

The culprit? Razor-thin reserves in the system, which means there is not enough required backup power to meet the peak demand of the Luzon grid while keeping the entire power generation and transmission network stable. This happens either because demand shoots up, as in the case during the summer months with increased use of airconditioning units, or supply drops when power plants conk out or go offline for repairs and maintenance.

Mario Marasigan, director of the Department of Energy (DOE) Electric Power Industry Management Bureau, said in a Senate energy committee meeting last week that based on their latest Luzon power outlook, capacity reserves will be critically thin in the fourth week of June, the third week of July, and the first week of August.

The National Grid Corp. of the Philippines (NGCP) puts the grid under a yellow alert when reserves are less than 1,122 megawatts, equivalent to the size of the single largest plant in the grid, and red when reserves drop to less than 475 MW. To prevent the entire system from shutting down, leading to a total blackout, the NGCP resorts to “manual load dropping” or rotating brownouts such as what happened earlier this month.

How did the Luzon grid, which provides power to the regions that account for the bulk of the country’s Gross Domestic Product, once again get to this perilous point?

The DOE was quick to blame the NGCP, attributing the problem to its alleged failure to secure “ancillary services” to ensure that the grid has enough reserves at all times, and to complete its transmission projects as promised. “The power of the National Grid Corporation of the Philippines as the grid and system operator is there. It is part of their responsibilities to help address demand-supply variations,” said Energy Secretary Alfonso Cusi.

The NGCP pointed the finger back at the DOE, countering that the inadequate power problem lies in the lack of additional baseload generating plants to keep up with rising power demand. “What we have is a supply and not a distribution problem,” argued NGCP President and CEO Anthony Almeda. “For the grid to effectively address imbalances between supply and demand, we need to increase the power capacity of the country to meet rising demand as we start to recover and fully reopen the economy.”

There is indeed urgent demand for new facilities; majority of the existing plants in Luzon are aging, with more than half of the facilities over 15 years old. The digital acceleration has led to more services being done online, requiring stable and reliable power supply.

Per the NGCP’s estimate, annual power consumption in the Philippines will grow by 14.09 percent from pre-COVID-19 levels in 2019 to 2021, when economic activity is expected to catch up and normalize.

There is also the extra demand for stable refrigeration to store COVID-19 vaccines. Sufficient electricity supply “is all the more important now that the country is continuously implementing the national rollout of COVID-19 vaccines, which require refrigeration at varying temperatures,” pointed out Quezon City Rep. Precious Hipolito-Castelo. “The country cannot afford the spoilage of these vaccines arising from lack of electricity.”

Lawmakers are in the right to demand accountability and explanation from both the DOE and NGCP, and to chastise the two offices for engaging in a useless war of words in the face of the looming power crisis. The scheduled maintenance shutdown in October of the Malampaya natural gas field, on which 3,200 MW of generation capacity in Luzon depends, may set back the economy even more.

And to think the problem with thin power reserves and rotating brownouts has remained unresolved since 2016, lamented Sen. Sherwin Gatchalian, chair of the Senate energy committee. Considering that it’s been a “recurring” problem in the past five years, Gatchalian called for an inquiry into the “critical” power situation in the Luzon grid and for the DOE to be held to account “for its failure to address power supply shortages.”

“It is crucial for the DOE to provide long-term solutions to this problem and a specific timeline for these plans, to include the hastening of the build-out of new power plants, aggressively utilizing energy efficiency and conservation, and contracting sufficient ancillary reserves,” said the senator. Congress should ride herd on the DOE et al. if need be, to hold these agencies’ feet to the fire and ensure that they can no longer be remiss in their fundamental responsibility.

Refugee’s Olympic dream ends in a flash in boxing