OFWs save the day 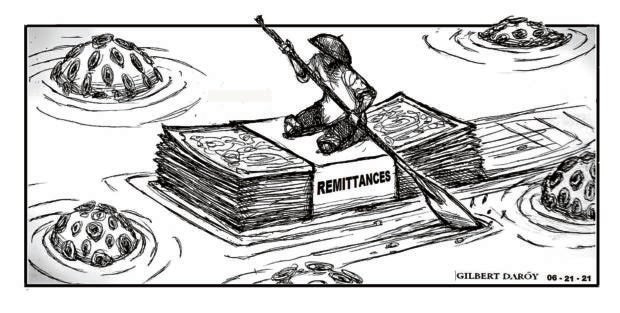 In 2020, overseas Filipino workers (OFWs) remitted $33.2 billion, or just 0.8-percent lower than the pre-pandemic level of $33.5 billion in 2019. This debunked projections that their remittances would contract sharply last year because of COVID-19. At the average exchange rate in 2020 of P48.19 to $1, total remittances were equivalent to P1.6 trillion, or nearly 40 percent of the government’s total budget of P4.1 trillion that year and eight times the P200 billion allotted by the Duterte administration as “ayuda” to help low-income families, farmers, fisherfolk, and those displaced by the lockdowns.

In the first four months of this year, dollars sent home by Filipinos overseas even exceeded the pre-pandemic level of 2019 and that of 2020. The Bangko Sentral ng Pilipinas (BSP) said remittances last April alone rose by 13.1 percent to $2.57 billion from a year ago. This brought the total for the first four months of the year to $11.03 billion, a 5.1-percent growth from $10.49 billion in the comparable period in 2020 and higher than the $10.81 billion in the same period in 2019. It was equivalent to P531 billion at the current exchange rate, or nearly treble the P170 billion required by the proposed Bayanihan 3 stimulus program for this year. Apparently, mindful of the dire situation at home with the Philippines’ steep economic downturn spawning record hunger and joblessness all around, OFWs have been spurred to send more money to tide over or provide emergency funds to their loved ones.

Remittances will truly be a big help considering that the government appears to have very few options left to continue helping those economically affected by the pandemic. Finance Secretary Carlos Dominguez III admitted during last week’s Senate committee hearing on the vaccination program that while the government supported more financial aid to vulnerable sectors, additional spending has to be within the government’s means and should not further bloat the budget deficit.

Pending in Congress is the proposed Bayanihan 3 bill, which has yet to receive a certification from the Bureau of the Treasury indicating the availability of funds for it. The problem, according to the finance chief, was that this year’s budget deficit would already widen to 9.3 percent of gross domestic product (GDP), or to a record P1.86 trillion. Any additional expenditures such as the P170 billion for Bayanihan 3 must have some other source of funds. President Duterte has already asked all the departments to look at their budgets and see which programs could be cut or postponed and the money repurposed to finance the stimulus plan. (Has the environment department with its wasteful “dolomite beach” project in Manila Bay gotten the memo?) Selling government assets is an option, but this would not meet the urgency of Bayanihan 3’s funding requirement.

The need to continue helping poor sectors cope with the crisis was also highlighted by a visiting team from the International Monetary Fund. The government may need to invest more in efforts to beat the coronavirus pandemic to ensure the country’s return to sustainable economic growth this year and in 2022, said the team. It noted that while the fiscal deficit targeted in the 2021 budget provided significant stimulus to economic activity, “more resources could be needed” to beat the virus and ease the continued difficulties faced by vulnerable families and businesses.

The IMF did credit the government for what it said was a comprehensive policy support package to address the recession following the strict quarantine measures needed to slow the spread of the virus and reduce the pressure on the healthcare system.

If the money is found for it and the bill is passed, the Bayanihan 3 may well be the last such stimulus and assistance measure under the Duterte administration; the government is hard-pressed enough to finance further social programs to cushion the impact of the pandemic. Were it not for the dollars sent home by OFWs, the country could be in an even worse position now. Once again, the millions of Filipino workers toiling abroad are saving the day for the Philippine economy, and for this the government can express its gratitude by making the OFWs’ plight less difficult. Assuring them of hassle-free arrivals and departures unencumbered by confusing, burdensome regulations and quarantine protocols will be a good starting point. Bringing home safe and sound, and quickly, those who have lost their jobs abroad is another.

Read Next
Education and competitiveness
EDITORS' PICK
Connect to PH’s fastest network with new Signature Plan Lite at only P599 per month
Harnessing technology for quality education
Hidilyn Diaz wins weightlifting gold in Tokyo Olympics
Another joke? Duterte mulls return of Balangiga bells to keep US away
Tips for a cheerful life
Duterte: When I said I will fight drugs in 6 months, I thought it was like in Davao
MOST READ
Duterte acclaims Sotto: ‘He can become a good vice president’
Hidilyn shoots not only for gold but also for permanent place in PH sports history
Duterte’s SONAs: From wishing to resign to saying he’s inutile
Go to war with China over West PH Sea? It will be a ‘massacre’, says Duterte
Don't miss out on the latest news and information.