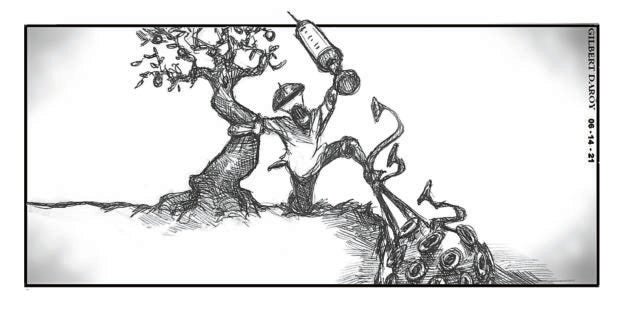 It may seem hard to make sense of recent economic developments. While foreign trade and manufacturing output rebounded in April from a year ago, unemployment worsened in the same period. Some economists have turned bullish about the economic prospects of the Philippines, yet the World Bank (WB) just last week lowered its growth forecast for this year.

Kevin Chua, World Bank senior economist, said the Philippines’ rebound this year will likely be around 4.7 percent — lower than the WB’s previous projection of 5.5 percent and the Duterte administration’s 2021 target of 6.0-7.0 percent.

Perhaps what all these developments indicate is that the economy remains in a precarious position. Everyone seems to agree that unless the COVID-19 pandemic is contained by mass immunization to allow a broader reopening of the economy, recovery will never happen this year. A positive development in this regard has been the arrival of millions of vaccines in the past few days, with more on the way in the coming months.

Trade and Industry Secretary Ramon Lopez expressed elation at the foreign trade figures, saying the latest exports data showed that the country was steadily recovering from the negative impact of the pandemic and that the numbers were better than pre-pandemic levels.

The 72-percent increase in April was the second consecutive month of year-on-year growth after the 33.3-percent jump last March. The spike was said to be due to the government having allowed full operating capacity among exporters even during the strict enhanced community quarantine.

Imports, on the other hand, jumped by 140.9 percent to $8.45 billion last April, a reversal of the 62.9-percent decline in the same period last year. The big jump in imports of raw materials indicates a further growth in exports in the succeeding months as these imported inputs are usually components for electronics, the country’s major source of dollar earnings.

Another source of optimism for Lopez was the year-on-year doubling in imports of manufacturing inputs, a sign that local manufacturing was ramping up. The Philippine Statistics Authority earlier reported that the volume of production index — a proxy for factory output — reverted to a growth of 162.1 percent year-on-year in April.

On the other hand, there was the bad news. A fresh round of stricter lockdowns beginning in late March in areas accounting for half of the economy raised the unemployment rate to 8.7 percent in April, equivalent to 4.14 million Filipinos without jobs, a fifth of them in Metro Manila. The unemployment rate the previous month was 7.1 percent. Compared to 2020, the jobless rate last April was a substantial improvement from the record-high 17.6 percent unemployment — equivalent to 7.23 million Filipinos — from mid-March to May last year, when 75 percent of the economy was at a standstill because of the most stringent lockdown in the region.

President Duterte’s economic team described the April unemployment rate as a temporary reversal of first-quarter employment gains, indicating the tight link between labor market outcomes and the level of quarantine restrictions. Some 2.1 million jobs mainly in the construction, agriculture, and wholesale and retail trade were lost between March and April this year after Metro Manila and nearby provinces returned to a more severe lockdown. Loss of jobs is clearly the biggest casualty of prolonged restrictions on mobility and economic activities. Higher unemployment, in turn, pushes more families into poverty.

Improving the rate of job creation is crucial in the country’s recovery effort this year. However, finance undersecretary and chief economist Gil Beltran acknowledged that while the continued rebound in foreign trade and indications of expansion in manufacturing activities are signs of green shoots, there remain the downside risks posed by COVID-19. Beltran and other experts in and out of government are unanimous on one thing: The key to restoring and maintaining the growth of economic activities is managing the spread of the virus and its risks.

Thus, whether the pick-up in foreign trade and manufacturing—and other economic activities for that matter—will be sustained and gain enough momentum will depend on the easing of quarantine restrictions, which is in turn dependent on how successful the government will be in containing the pandemic. Economic recovery from the worst economic implosion the country has seen since the war is hinged primarily on the success of achieving population immunity, or inoculating some 70 million Filipinos, in the shortest possible time.

As WB’s Chua formulated it: “The key policy challenges are to manage the pandemic, effectively deliver social protection, and mobilize sector participation in the recovery.” Much remains to be done at present to make that happen—and the clock is ticking fast.