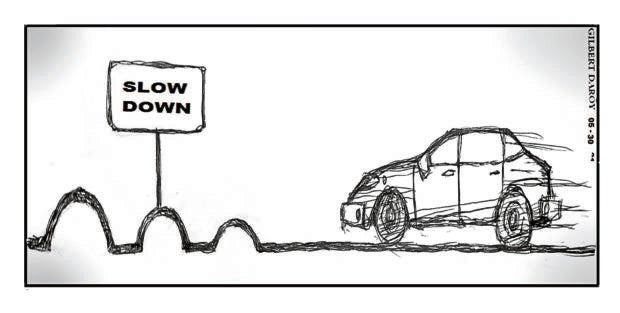 Road safety advocates are pushing to lower the speed limit to 30 kilometers per hour on urban roads, particularly where people walk, live, and play, to make such roads safer and reduce the occurrence of accidents that could be fatal.

Last year, per data from the Philippine Statistics Authority, about 8,000 deaths were caused by road accidents. While this number represents a 37.4-percent decrease from 12,800 in 2019, this still translates to an average of 22 road deaths a day. The lower figure could be attributed to the COVID-19 lockdowns imposed across the country that limited the movements of people and cleared the roads of most motor vehicles. The lockdowns, however, have also spurred the rise in use of bicycles and motorcycles as alternative means of transport for people to get to work—in roads that are not designed or built to protect riders, making it even more crucial for local government units (LGUs) to look at the speed limits in their areas and lower them according to the risks involved.

“Speed is at the core of the road traffic injury problem. More particularly, excessive or inappropriate speed is a key risk factor for road traffic collisions, deaths and injuries,” said the World Health Organization in a 2017 publication. The WHO kicked off the #StreetsforLife and #Love30 campaign in celebration of UN Road Safety Week on May 17-23, noting that limiting driving speed to 30 kph is vital to reducing road traffic deaths and injuries. Even a five-percent cut in average speed, it stressed, can reduce the number of fatal road crashes by 30 percent, and that the lower the speed, the lower the risk for an adult pedestrian to die if struck by a car.

In a study conducted by advocacy law group ImagineLaw, only about half, or 56 out of 100 localities it surveyed, have created their own ordinances on speed limits in their areas. In a webinar the group organized last May 21, road safety advocates noted that in busy mixed-use roads such as Commonwealth Avenue, where the speed limit is 60 kph and where there are establishments like restaurants, malls, and schools along its entire stretch, the LGU should consider lowering the speed limit, especially in spots that tend to get crowded and where accidents are more likely to happen.

“What makes the street not safe… a lot of factors but the number one that causes injury is the speed of the motor vehicles or possibly crashing into cyclists. Walang laban ang cyclists sa mabilis na kotse, unlike cars na may outer shell. Reducing [the speed] to 30 kph will greatly lessen the impact ng kotse sa cyclist. Malaking tulong,” said Keisha Alena Mayuga, biker and founder of Life Cycles Philippines. The government should also consider building service roads in mixed-use roads and ensuring adequate street lighting to avoid accidents at night.

According to the Metro Manila Accident Reporting and Analysis System, there were 65,032 road crashes recorded in Metro Manila last year, mostly involving motorcycles, followed by cars, trucks, and bicycles. The report estimated that 178 crashes happen daily in the metro. More worryingly, the highest number of road crash fatalities—20 percent—involved pedestrians hit by vehicles.

Across the world, 3,700 die each day from road traffic crashes, which has become a “routine occurrence,” according to Etienne Krug, director for the WHO’s social determinants of health department. “[T]hat’s one death every 24 seconds. Many of those killed are children and adolescents. In fact, there is no greater threat to the lives of young people than a road traffic crash.”

“As we embark on building back better from the COVID-19 pandemic, the time has come to return urban streets to people,” said Krug. “Such low-speed streets are the foundation on which to build safe, healthy, green and livable cities, cities for people.”