‘On the right track’? 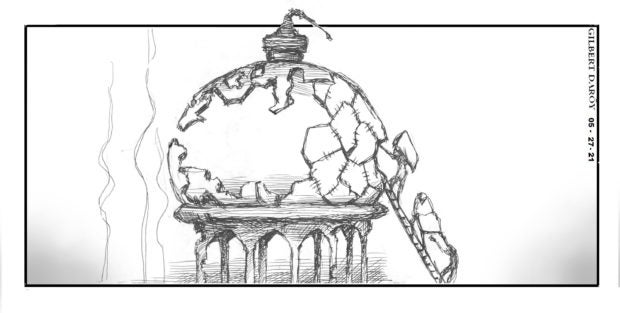 Four long years after Marawi City was left in ruins by a five-month battle between Islamic State-inspired extremists and government forces, thousands of displaced families still waiting to go back home are left hanging on to yet another slew of government promises, which comes around like clockwork on the anniversary of the costly siege.

Eduardo del Rosario, Housing Secretary and chair of Task Force Bangon Marawi, reported this week that the rehabilitation of key infrastructure projects within the 250-hectare area that suffered the brunt of the damage from the siege was “65 percent complete.”

The “progress” of the rebuilding work on these infrastructure projects, some of which started only in July last year, was paraded before a group of international and local media during the Marawi City Week of Peace from May 17-23, in a bid to dampen withering criticism over the protracted delay in rehabilitating the capital of Muslim Mindanao, which President Duterte had promised would be “rebuilt to its former glory.”

Said Del Rosario while touting showpieces such as the Grand Mosque, Disomangcop Mosque, and the Gadungan housing site: “Now we can stand proud and tell the world, to the public, that we are on the right track and we are doing it right, and we will complete substantially the rehabilitation by December of 2021. Thus, Marawi will rise again as a prosperous city.”

More than 300,000 residents fled the city at the height of the siege when Lanao del Sur’s capital was taken over by the Maute and Abu Sayyaf groups on May 23, 2017. Four years later, some 90,000 are still unable to return, prevented in part by lack of funds to rebuild their homes and the difficulty of securing needed permits.

Residents fear that the announced completion by the end of the year will be yet another promise left unfulfilled with just over a year remaining in the Duterte administration’s term. Their hopes that Mr. Duterte would swiftly fulfill his 2017 promise to rebuild the city had been already cruelly deflated in 2019, when the President said he just would leave the rehabilitation to the city’s supposed affluent residents since “maraming pera ang mga tao diyan.”Thus, as the Marawi Advocacy Accompaniment (MAA) lamented, “Four years after the siege, most of the promises including providing just compensation for the damages to livelihood and properties of the affected families and the immediate return of the displaced back to Marawi remain unfulfilled. President Rodrigo Duterte’s promise saying that Marawi will rise as a prosperous city again remains invisible and cannot be felt on the ground.”

The MAA, representing 21 organizations, called on the administration to urgently speed up the city’s rehabilitation so that the displaced residents still languishing in temporary shelters can finally return home and rebuild their shattered communities.

That the December deadline will again not be met is a concern arising from repeated setbacks. For one, of the P70 billion earmarked for the city’s reconstruction, only P17 billion was included in the national budget from 2018 to 2020, according to Zyza Nadine Suzara of the Institute for Leadership, Empowerment, and Democracy.

Construction work only got into full swing in April last year, following the much-delayed clearing of debris including unexploded bombs in the most affected area, only to be hobbled again by quarantine restrictions in the wake of COVID-19.

Non-government organizations have warned that with the seemingly never-ending delays and the opaque reconstruction process, frustration is mounting that could plant the seeds for the radicalization of disenchanted residents stewing in feelings of being ignored or neglected. London-based International Alert noted that extremists have been “using the delay in the reconstruction in Marawi as a rallying point to try and stoke the frustrations of people,” with active recruitment to the cause of the Islamic State reportedly ongoing in remote towns in the region around Marawi.

Residents are also calling for the passage of the Marawi siege compensation bill for them to have the funds they need to rebuild their homes and livelihoods. A consolidated bill providing for some P30 billion to P50 billion to help Marawi folk remains pending in Congress, and Malacañang has expressed coolness to that proposal (presidential spokesperson Harry Roque: “The support of the President will depend on the amount to be allocated”).

“If the bill does not get passed before Congress deliberates on the 2022 national budget in August, the Maranao people will have to spend another year without reparation for the damages caused by the war,” wrote advocates Deanne Capiral and Maureen Lacuesta of the peacebuilding NGO International Alert Philippines in a commentary published in this paper last Sunday. “Another year of waiting is a step closer to being forgotten.”