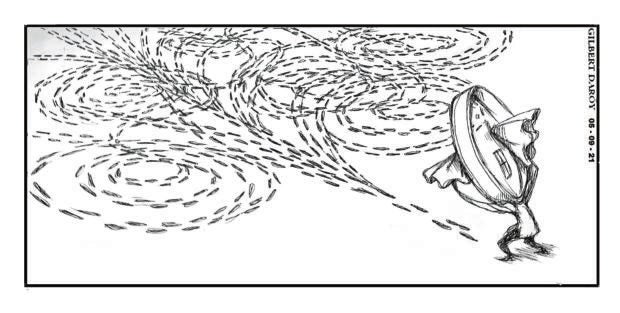 The government has said it’s going ahead with StaySafe.ph, a contact-tracing application, to help it keep track of COVID-19 cases nationwide. But despite over a year of working on issues raised earlier about the app, large segments of the public remain unfamiliar with the technology, and national contact-tracing efforts still operate in fits and starts.

The country’s “contact-tracing czar,” Baguio Mayor Benjamin Magalong, had himself expressed doubts about the app, saying he couldn’t vouch for its reliability. Magalong noted that the documentation submitted by the app’s developer, Multisys Technologies Corp., to the Department of the Interior and Local Government (DILG) was incomplete.

In its video explainer, Multisys described StaySafe.ph as a “community-driven contact tracing, health condition reporting, and social distancing system” app that requires users to register through their mobile phone numbers, with the assurance that users’ data are protected under Republic Act No. 10173 or the Data Privacy Act. Through the app, users are notified of areas where there are positive, probable, or suspected COVID-19 cases.

The app has been controversial since last year. In a Facebook post on June 7, 2020, former Department of Information and Communications Technology (DICT) undersecretary Eliseo Rio Jr. questioned StaySafe.ph’s reliability and what he called the government’s “unreasoned interest” in a single app. The app only works on 3G-capable phones and newer models, Rio pointed out, which could leave out over 20 million Filipinos using 2G devices. Also, it was no more than a “health monitoring app with a location tracker, but up to now has no contact tracing capability.” Rio said the database of cell phone numbers and location generated by the app was “useful for surveillance purposes of people who reported themselves with symptoms, but of little value to people who report themselves as healthy.”

Per Rio, at the time of the government’s approval of the app in April last year, the technology was still a “work in progress”—the same words Interior Secretary Eduardo Año would use last April 23 to try to convince commercial establishments to use the app under the government’s Safety Seal Certification Program: “Somehow we must agree there must be one system that you will have to work and put it as the center of our contact-tracing system, otherwise if we use our respective apps, all the more we won’t be able to integrate [our] data. It’s a work in progress, but seriously, we are now focusing our attention on it and we will make this work.” The country had been grappling with the pandemic for a year by this time.

Año claimed that the app now has more than 3.2 million users for mobile app and web, about 3 percent of the country’s population. (His undersecretary Jonathan Malaya, on the other hand, claimed on March 29 that the app is being used by about 15 million individual users and by some 700 LGUs across the country.) But for the app to be effective, at least 60 percent of the population or about 64.2 million must download it, and “At the rate of a million registered within two months, it will take more than 10 years for StaySafe to become effective,” Rio said in another Facebook post.

Complicating the situation further is the move by several LGUs to develop their own contact-tracing application, such as MandaTrack (Mandaluyong), PasigPass (Pasig), ValTrace (Valenzuela), Antipolo Bantay COVID-19, etc. Some of these apps are even integrated with one another; for example, PasigPass can also be used in Antipolo, Valenzuela, and Mandaluyong. This has prompted DILG officer in charge Bernardo Florece Jr. to appeal to LGUs to use StaySafe.ph: “Hindi po puwedeng kanya-kanya tayo… Instead of using other apps, it is imperative for LGUs to use the StaySafe app for a unified system that will allow seamless, fast, and efficient contact tracing efforts.”

All these issues aside, user experience also matters. Some of the reviews of StaySafe.ph have noted that it is cumbersome and takes time to load. “The idea of the app itself [is] great and convenient, but there’s one [tiny] problem… Well, it’s a pretty big problem… Opening the app takes so long!” declared one review in the AppStore. StaySafe.ph’s average user rating is a mediocre 2.3 out of 5. If the app is deemed this unreliable and difficult to access, who would want to use it?

Contact tracing is a critical pillar in the fight against COVID-19, and has been credited for successful containment of the outbreak in many countries that put serious effort into a unified, promptly implemented, and properly managed campaign that closely engaged the public. In the Philippines, however, it remains Exhibit A of the gross dysfunction and disarray at the heart of the national government’s pandemic response, well over an entire year into the devastating health crisis.