Our purist sense of identity 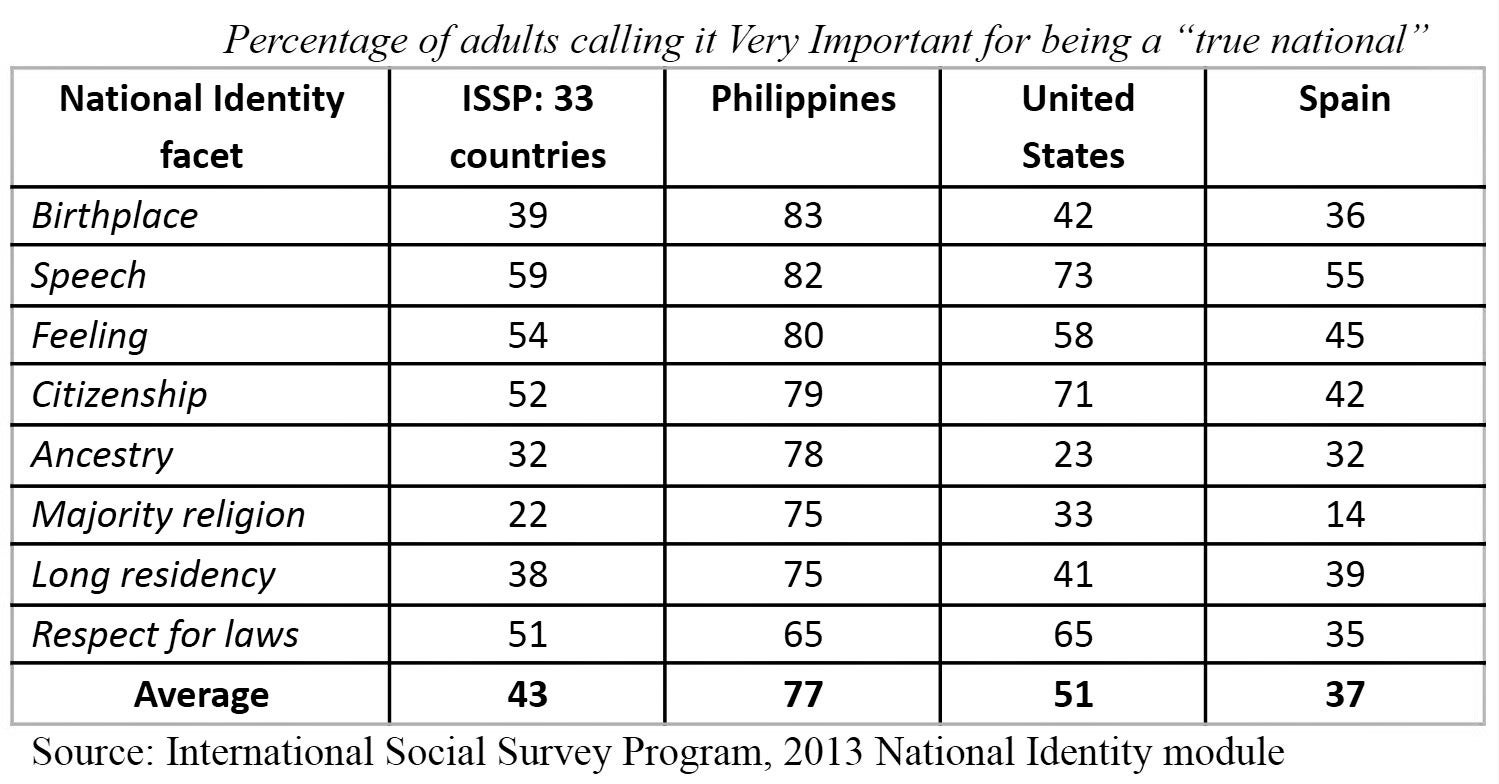 Last week, I showed data on Filipino attitudes toward eight specific attributes of national identity (“Facets of Filipino identity,” Inquirer.net, 4/24/21), and promised an international comparison next. Actually, I did one in late 2018, in “Who is ‘truly Filipino’?” (12/22/18), with the 32-country compilation of the International Social Survey Program (ISSP) module on National Identity, and concluded that “we Filipinos are rather purist in defining what is true nationality.”

My conclusion is unchanged, because the full dataset still shows us Filipinos with the highest, or No. 1, proportion of adults that consider six attributes—namely birthplace, speaking the official language, citizenship, ancestry, long residency, and majority religion—to be Very Important (VI for short).

This does not mean that, individually, we each have all the attributes of being a “true Filipino.” What it means is that we consider it Very Important that a “true Filipino” should have them all. I call this a purist conception of national identity.

Definitely, we Filipinos are the most purist of the 33 peoples surveyed, since we give a 77 percent average VI grade across all the identity facets, versus only a 43 percent average given by the group of 33 (see table). All facets are graded VI by a majority of Filipinos, whereas only four—speech, feeling, citizenship, and respect for laws—are graded VI by majorities in the group of 33.

The peoples closest to us in being identity-purist are the Georgians (average 66 percent VI grade), and the Turks (average 60 percent). They are in second and third place after us in grading ancestry, long residence, and religion. Georgians are second to us in grading speech; Turks are third to us (while Indians are second) in grading birthplace. Filipinos have had very little historical connection to Georgians and Turks; but I notice from the ISSP surveys that all three peoples rank high in religiosity.

Included in the table are the United States and Spain, to see if our history with them has a bearing to our attitudes about national identity. It shows that the majority of Americans grade only four attributes as VI: in order of importance, speaking English, citizenship, respect for laws, and feeling American. Birthplace matters for only a minority 42 percent, even though US law includes jus soli. Whereas it matters for 83 percent of us, even though Philippine law is jus sanguinis only. So much for linking what the law says to what the people feel.

In Spain, it is only speaking Spanish that matters to the majority. Only 14 percent say that a true Spaniard should be Catholic. And yet, this year, we mark 500 years since Catholicism arrived from Spain.