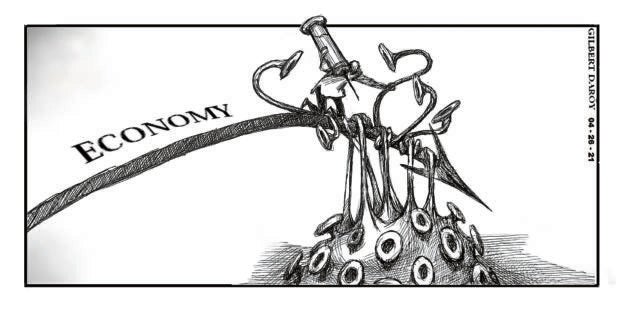 The growing international consensus over the way the Duterte administration is struggling to contain the spread of COVID-19 is not encouraging: Because of the government’s chaotic response to the pandemic, the Philippines will be among the last economies in Asia to recover from the worst public health and economic crises to hit the region.

“A failure to contain the virus and lackluster fiscal support means that the Philippines will experience the slowest recovery in the region,” said the London-based think tank Capital Economics. It noted in its April 21 economic outlook on emerging Asia the surge in new COVID-19 cases in the Philippines that had forced the government to reimpose strict containment measures, strangling economic activity yet again in the National Capital Region, Bulacan, Laguna, Cavite, and Rizal that together account for half of the country’s gross domestic product.

Capital Economics’ dim view jibes with the earlier assessment of Moody’s Analytics, which said in its April 18 report that the COVID-19 situation was “dire” in the Philippines. “The Philippines is the laggard of the entire region as a record-high number of new COVID-19 cases has led to a resumption of strict lockdowns in Metro Manila,” declared Moody’s Analytics chief Asia-Pacific economist Steven Cochrane in the report. “There is much uncertainty about the outlook for the Philippines.”

The grim numbers support these sobering analyses, as the Philippines has the most new COVID-19 cases in Southeast Asia as of April 23 and the highest active case load—surpassing the levels of more populous Indonesia—even as it continues to extend its dismal record of having the world’s longest lockdown.

“The lack of control of the pandemic, the inability to acquire vaccines, and the relative distance from export supply chains all factor into the outlook for the Philippines to be among the weakest in the region,” Moody’s Analytics said.

The World Bank has a similarly pessimistic outlook on the Philippines where “COVID-19 control has not been achieved,” prompting it to slash its 2021 GDP growth forecast for the country to 5.5 percent from the earlier 5.9 percent. That projection is way below the government’s “conservative” growth target of between 6.5 percent and 7.5 percent this year, coming off a contraction last year of 9.6 percent, the worst slump since World War II.

The Duterte administration has pinned its hopes of solving the COVID-19 crisis and reopening the economy on the rollout of vaccines. But even in that area, huge gaps and uncertainties remain.

National Task Force Against COVID-19 chief implementer Secretary Carlito Galvez Jr. last week claimed that the Philippines was “not left behind” in the vaccination drive. With 1.353 million Filipinos vaccinated since the program rolled out on March 1, Galvez said the country ranked 4th among Southeast Asian countries in terms of the number of doses administered to individuals.

What was left out, however, was that tallied against the Philippines’ total population, the number translates to a mere 1.3 percent of the public getting the COVID-19 vaccine so far. “A successful vaccination rollout would be a game-changer. But progress so far has been disappointing — just 1 percent of the population have been inoculated. The slow rollout raises doubts about the government’s ability to meet its target of inoculating 60 percent of the population this year,” said Capital Economics.

“Failure to suppress infections has required restrictions to remain in place for longer than elsewhere in the region. And fiscal support has been inadequate. COVID-19 will leave a legacy of job losses, higher debt and an impaired banking system,” the think tank added. Because of these setbacks, its conclusion is stark: “Lasting damage from the pandemic is likely to be greatest in the Philippines.”

The government’s economic managers, however, remain optimistic that macroeconomic fundamentals are strong despite the beating the economy has taken and the thousands of new COVID-19 cases still being tallied every day. Japanese debt watcher Rating and Investment Information Inc. did keep its “stable” outlook on the Philippines last week, believing that the country will recover on the back of aggressive public investment and continuing tax and regulatory reforms.

Filipinos will have a better idea of the progress — or lack of it — of the administration’s COVID-19 response when members of the economic development and infrastructure clusters of the Cabinet report today on the “path to a quick and strong recovery from this global health and economic crises” during the pre-State of the Nation Address virtual forum. At the end of it, lockdown-weary citizens can only hope there is reason to believe the Duterte administration has what it takes to prove the bleak projections wrong.