How ‘Philadelphia,’ landmark AIDS movie, holds up in 2020

Although it came at my editor Jen’s highest recommendations, I delayed watching the 1993 courtroom drama “Philadelphia” for as long as I could.

“You will love it!” she proclaimed. I could see why she would think so.

The film is one of the first mainstream Hollywood movies to tackle the HIV/AIDS crisis and the homophobia surrounding it. It won two of its five Oscar nominations and became a box office hit. It was directed by Jonathan Demme, who snagged Oscars for “The Silence of the Lambs,” and written by Ron Nyswaner, who himself is gay and advocates for gay rights.

“Philadelphia” follows high-flying lawyer Andrew Beckett (Tom Hanks), who is suddenly dismissed from a top law firm. He is convinced it is because the firm’s partners found out he has AIDS, and enlists the help of Joe Miller (Denzel Washington), a previous opponent, to sue his former employers. Though Joe is all about sticking up for the little man, he is terribly afflicted by a more dreaded disease — homophobia — and is forced to come to terms with it as he defends Andy, who is deteriorating as the case drags on.

The movie is based on real court battles, including that of Geoffrey Bowers, who was dismissed from the world’s largest law firm after lesions began to appear on his face. Bowers eventually won the case, but died shortly after it was resolved. Though this happened to be the conclusion of “Philadelphia,” TriStar Pictures initially denied the movie was inspired by Bowers, only to later on admit to it and settle with Bowers’ family in 1996.

How the younger me first knew about AIDS

I don’t doubt “Philadelphia” affected its audiences during its time, given that much of what I know about the HIV/AIDS crisis also came from works of fiction. “Rent” remains my favorite musical, which led to me to a Wikipedia deep-dive on HIV/AIDS when I was 13 years old (I had to know what “AZT break” meant!). That’s more than what I can say about our all-girls Catholic school, which simply taught us that it was a sexually transmitted disease, and that you couldn’t contract it through saliva.

It was only when I was in college that I Iearned that access to AZT was in part thanks to Ron Woodroof, a man from Texas who had AIDS and would smuggle unapproved drugs to patients who needed them. His story was depicted in 2013’s “Dallas Buyers Club.”

Compared to “Rent” and its diverse set of characters and catchy rock music, I imagined “Philadelphia” would be a tad more predictable, offering brilliant portrayals from its powerhouse (mostly white) cast, courtroom theatrics, bigoted remarks and a formulaic David-and-Goliath narrative that makes Hollywood films so watchable.

“Philadelphia” did deliver on those expectations. Undoubtedly, it is a product of its time. Where the story fell flat for me was that it felt like it was made for the uninformed public, rather than the gay community and others dealing with the disease.

For instance, a number of scenes center on Joe dealing with his anti-gay biases, even if his own client is gay. Was I supposed to feel sympathy for him because he was fighting for the rights of a client whose “lifestyle” he was disgusted with? Despite the injustices that he faces, Andy is mostly calm about his situation, even as the opposition’s lawyer exposes the private details of his life, like watching gay porn in a cinema. I wondered where his rage was, and if it was another aspect sanitized for mass audiences. And though Andy has a loving long-term partner, Miguel (Antonio Banderas), we never see them kiss. In fact, a scene of them simply getting into bed was removed.

So, how does “Philadelphia” hold up in 2020? A trip down the internet memory lane and from beyond the grave, Demme was able to argue his case and cause to the skeptic in me.

An AIDS movie for the mall cineplex

As the film’s writer Nyswaner said in a 2018 The Hollywood Reporter interview, the goal in making “Philadelphia” was “to do something that would play at the mall cineplex.”

Demme is no stranger to criticism about queer representation. Amidst the acclaim of his earlier film “The Silence of the Lambs,” the LGBTQ+ community slammed the character of Jame Gumb, a serial killer who wants to become a woman, amid Hollywood’s limited inclusion and/or antagonistic depiction of gay characters.

Demme admitted to Rolling Stone in 1994 that he was “enlightened” about protests against “The Silence of the Lambs,” but that he was already working on “Philadelphia” prior to the backlash. In 2014, he would tell The Daily Beast that the criticism indeed was a “wake-up call” and among those who opened his eyes to the harms of such depictions was a dear friend, Juan Botas. Botas served as his motivation to make “Philadelphia” after Demme learned he had AIDS. 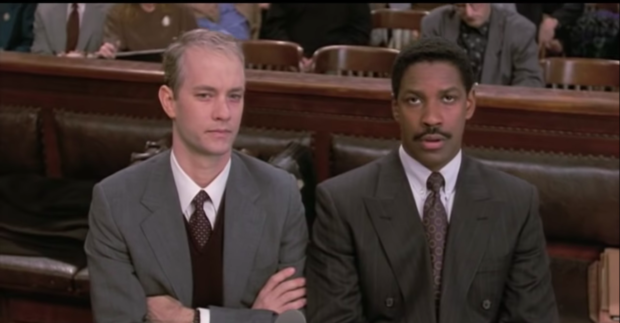 “We decided it would be pointless to make a film for people with AIDS. Or for their loved ones,” Demme said in the Rolling Stone interview, as if to answer my own concerns with his work. “We wanted to reach people who don’t know people with AIDS, who look down on people with AIDS.”

As for Andy’s lack of anger at his circumstances, Demme had an answer for me too. He said in the Rolling Stone interview that Andy, dying from AIDS, views “rage as a wasted emotion,” but does concur that they might have gone “a little too far on that side.” He also revealed that initial scripts were “angrier” and “very politicized.”

And what about all the focus on Denzel Washington’s character? “When we started out making an AIDS film, we realized that in order to get to the roots of AIDS discrimination, you had to unpack homophobia in America,” he explained to The Daily Beast.

He was unapologetic about not including a kissing scene in “Philadelphia”: “It’s just shocking imagery, and I didn’t want to shoehorn it in.” The belief was that commotion over the kiss would overpower the whole story. 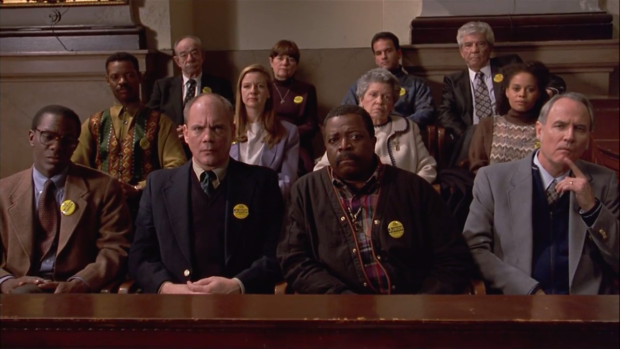 The result, then, is a movie about AIDS from the perspective of those who have no clue about it, or maybe don’t care to learn about it. It shows that ignorant people like Joe Miller (perhaps literally, the average Joe) are not bad people and in fact, do many good things, like raise a family and fight for justice. The film must have hoped that if these people with prejudices did not know people in the gay community, the movie could do it through Joe and his interactions with Andy.

“Philadelphia” was in-your-face about Joe’s homophobia, like having him make a scene when he gets hit on by a man. He asks angrily, “Do I look gay to you?” Cringey, especially in 2020, but straight to the point.

I will concede that even for 1993, “Philadelphia” had its revolutionary moments. Sure, no kiss, but Andy and Miguel were always tender around each other. Andy also had his entire family behind him, even as the courtroom battle sought to humiliate him.

Gay activists argued that such family support was unrealistic for most people who had AIDS; but Jen argues that it is important to depict that kind of support because “it’s not that it’s a fantasy; it’s the ideal we must aspire for,” even citing a Sue Prado scene as a supportive mother in the Filipino Boys’ Love series “Gameboys” as a popular present-day parallel, “important for normalizing a loving stance.”

Demme also saw to it that among the extras in “Philadelphia” were 50 actors with HIV and AIDS.

What I consider that does stand the test of time is how Demme infused heart into a divisive issue, and had the heart to make such a movie despite (valid) criticism from the very community he sought to help.

In his activism, I am reminded of a quote from Brene Brown, a researcher who studies vulnerability and shame: “I am not here to be right. I am here to get it right.”

Maybe he didn’t get it right always, but Demme did try. I wondered, though, what the movie meant for someone who the movie was made for – someone raised in a patriarchal society that promotes macho stereotypes, as Joe Miller was.

I didn’t have to look far for that. I was watching the movie with my boyfriend Joms when he told me over chat, “Admittedly I don’t know much about AIDS.” At that point Tom Hanks’ character had lesions on his face. I would say Joms is accepting of the LGBTQ+ community, even with his Catholic upbringing and the fact that he went to an all-boys school. Still, the movie surprised him. He was taken aback when people around Andy would move or look away from him when they saw his lesions.

“I’m so mad at people treating him unfairly,” he said. “And mad at myself for not educating myself about this sooner.” He concluded that the movie was “super impactful” for him, and appreciated learning about Andy’s troubles with discrimination.

Though I may have called it dated, “Philadelphia” still does the educating it set out to do, almost 27 years later – and as it does, can it really be dated? And I can’t help but ask, what’s not to love?

Niña V. Guno is a deputy editor and writer at INQUIRER.net. She loves watching sitcoms and rom-coms, cuddling with her dogs, and making and listening to podcasts. She wants to keep trying to get it right.

Our family and the distance between