Rice farmers not beggars but give them humane, just prices for their produce | Inquirer Opinion

Rice farmers not beggars but give them humane, just prices for their produce 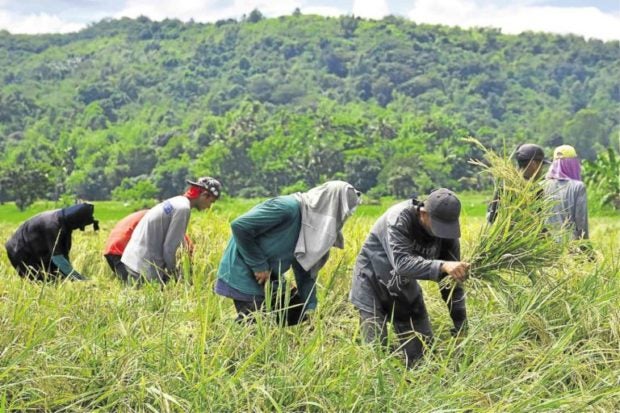 It would seem that planting rice would never be fun, especially for hundreds of thousands of farmers who had stopped the backbreaking work in the field because of falling prices of the staple resulting from import liberalization. (Willie Lomibao)

A systematic view of why the price of wet unmilled rice, or palay, had dived to P11 to P13 per kilo, an impoverishing level, could be attributed mainly to the National Food Authority’s (NFA) remaining task of “buying palay only for buffer stock.”

Buffer stock refers to the volume of palay or milled rice stored in anticipation of disasters (flood, strong typhoons, drought). Buffer stock provides temporary relief to a shortfall of supply due to a loss or low harvest.

Agriculture Secretary William D. Dar had earlier said that based on Department of Agriculture (DA) estimates, the Philippines “will enjoy an ending rice inventory of 3.27 million metric tons by Dec. 31 this year.”

“That means we will have rice to feed the entire country for 94 more days or three months, up to March 2021,” Dar had said. This DA estimate is based on the Philippine Statistics Authority’s official data and validated on the ground by the DA’s field offices. (https://www.da.gov.ph/phl-has-94-day-rice-surplus-by-end-of-2020/).

This statement by Dar should be clarified as he refers to all rice stocks, including those held by households, and managed by the traders, not just the buffer stock managed by NFA under the Rice Tarrification Act (RA No. 11203).

The NFA is currently buying palay from our rice farmers to maintain only a 15-day buffer stock which has a budget of P7 billion.

Apportioning funds to NFA branches in rice-producing provinces spreads the budget thinly, and it diminishes the impact of this amount that can buy  about 5 percent or less of the rice harvest.

Considering the NFA requirements (moisture content and purity of the rice),  the hauling cost and distance (small farmers do not own 10 wheel-trucks), the time to wait before their palay will is tested or assessed and the big traders competing to sell palay, the share of smallholder farmers in NFA’s limited budget for buying palay for buffer stock is very small .

Furthermore, rogue cooperatives that allow their names to be used by big traders further reduce the NFA price for smallholder farmers’ palay to as little as P18 to as much as P20 per kilo.

This is aggravated by the practice of traders to lend in advance to smallholder farmers in exchange for their future harvest (no written contract) and by uncompetitive situations (no dryer, no hauling trucks and no capital for production). Smallholder farmers are left with no choice but sell their harvest at low prices to exploitative rice traders.

As shown in the figure below, the way to go is to increase the 15 day-buffer stock to 60 days.

Years ago, we had a 60 day-buffer stock. But that was the time when we had a population of only less than 50 million. Considering our per capita consumption of 94 kilos at that time and 50 million people, the 60-day buffer stock translated to 0.8 million tons only. 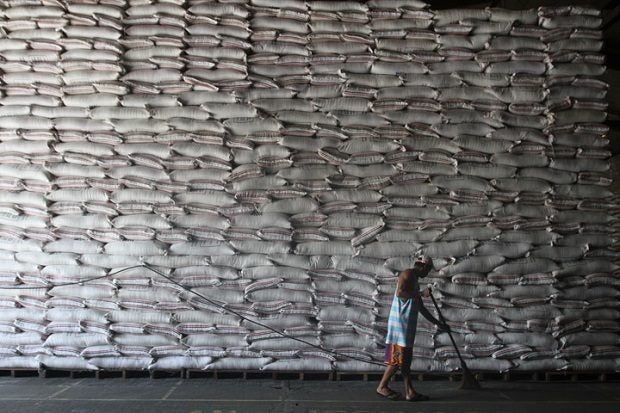 This lag in logistics buildup over time could be attributed in part to the many criticisms against the NFA. The most depressing is about the agency’s huge debt of at least P170 billion after the administration of Gloria Macapagal Arroyo.

Because of this, many are advocating the abolition of the NFA. It was not abolished but instead, as stated earlier, under the tariffication law,  NFA’s role has been limited to maintaining a buffer stock for 15 days only.

The architects of the law did not anticipate the negative impact of rice trade liberalization in sinking the price of locally-produced palay. The law made the government, through the DA and NFA, inutile in intervening as palay prices plunged for two wet season croppings now. Unless the buffer stock is increased, the role of NFA in helping stabilize local palay prices will not be effective.

The DA is looking at increasing buffer stock to 30 days, which translates to 10 percent of our wet season rice harvest. Our analysis revealed that it would not have much impact because it would be equal to about only 1 percent of production.

To make an impact, the NFA should buy up to 20-30 percent of the local palay production. Increasing the buffer stock to 60 days will enable  the NFA to buy about  28 percent of rice harvest, or about 3.2 million tons of palay.

About P64 billion is needed to buy 3.3 million tons of palay at P20 per kilo.  Add the logistics requirements, the additional budget will be higher. Why should we insist on a higher buffer stock (minimum 60 days)?

To increase the NFA palay procurement to address the unjust and inhumane low price of palay that impoverishes and discourages farmers from growing rice. Given the option to leave, they will exit rice farming.  Who shall grow rice for us?

Increasing the NFA buffer stock to 60 days will be the game changer. It would reduce dominance of private traders who are buying palay at an inhumane and unjust price from our disadvantaged smallholder farmers.

Where do we get the budget to increase the buffer stock level? Below  are   some options:

1. Suspending interest payment of the NFA’s debt to the state-owned Land Bank of the Philippines will free up at least P25 billion.
Converting the P600 per month rice subsidy of 4Ps beneficiaries would free up at least P32 billion.
Increasing the P7 billion NFA budget for buffer stock to P17 billion in 2021.

These will add up to PhP 64  billion  and enable NFA to buy palay directly from rice farmers (3.2 million tons of palay at P20 per kilo and 28 percent of 11.4 million tons of wet season rice crop).

Further, the P19.1 billion rural development funds can be  re-allocated  for the 60-day  buffer stock’s logistics requirements since  the NFA has sufficient logistics for 15 days already .

For national security reasons, other countries have a buffer stock up to 100 percent  that they dispose of and replenish periodically.  Those buffer stocks are rolled over to dispose of old stocks and buy new stocks.

Stabilizing the local palay prices to just and humane level (minimum P20 per kilo) shall motivate our rice farmers to increase yield as production technologies for high yield are known and many farmers are using these already.

But the inhumane and unjust price of palay had markedly demoralized and diminished farmers’ initiatives. It increased their frustration level. Others are suffering from mental anguish as they do not know where to get money to support their children in their studies especially during this  pandemic.

The new normal in education required gadgets (laptops, computers, Wi-Fi connections) and money to buy these. 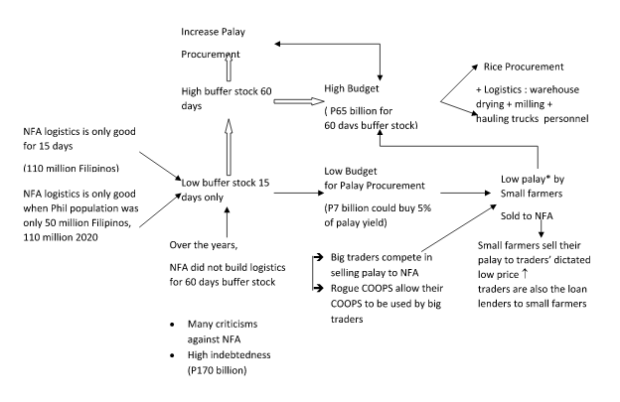 The Interrelationships of factors of low buffer stock = low budget and the low farm gate price of palay. (Palay is paddy rice or unmilled rice at P20/kg).

Helping our rice farmers and their families is helping our nation as rice is our staple food. The low buying price attributed to low buffer stocking (15 days only) led to this sudden transformation of our farmers into beggars. But no, they are not! If only we buy their produce at a non-beggar price of P20-22 per kilo we will enable them to  regain their dignity in  rice farming .

For the long term, however, more sustainable solutions are needed for our impoverished farmers. Briefly outlined, our farmers must be organized into cooperatives to benefit from the value chain, encouraged to diversify their farming systems and livelihood and given an investment incentive program that encourages farmers to return to agriculture.

The farmers’ role is essential to national security (Trump gave US farmers $16B after China did not buy their produce). A nation that cannot feed her own people is not a sovereign nation!