Midway through the tunnel?

The COVID-19 pandemic is like a very deep dark cavern, ridden with tunnels, into which we Filipinos, with other peoples of the world, suddenly fell, and for a long time now have been patiently struggling to find ways to get back into the light again.

There is no consensus as to how long it will take to emerge from this abyss. Back in early May, almost half, 44 percent, of Filipinos felt that the worst was over, and that they could glimpse a light at the end of the tunnel ahead. But the other half, 47 percent, felt that the worst was yet to come (Report No. 13 of the SWS May 4-10, 2020 COVID-19 Mobile Phone Survey, www.sws.org.ph, 7/7/20).

The survey found the gloom spread throughout the archipelago, from north to south. It was similar for general community quarantine and enhanced community quarantine. It was slightly less among the very few (6 percent) who managed to benefit from the lockdown, and among the quarter (24 percent) who think they will recover by next year. College graduates were gloomier than elementary dropouts. How the mood is evolving is anyone’s guess.

A global perspective on the COVID-19 statistics. The table outlines my personal take on the monitoring of the COVID-19 situation. In the first place, I like to see the numbers always in relation to the population. Such data, by country, are conveniently provided by www.worldometers.info. 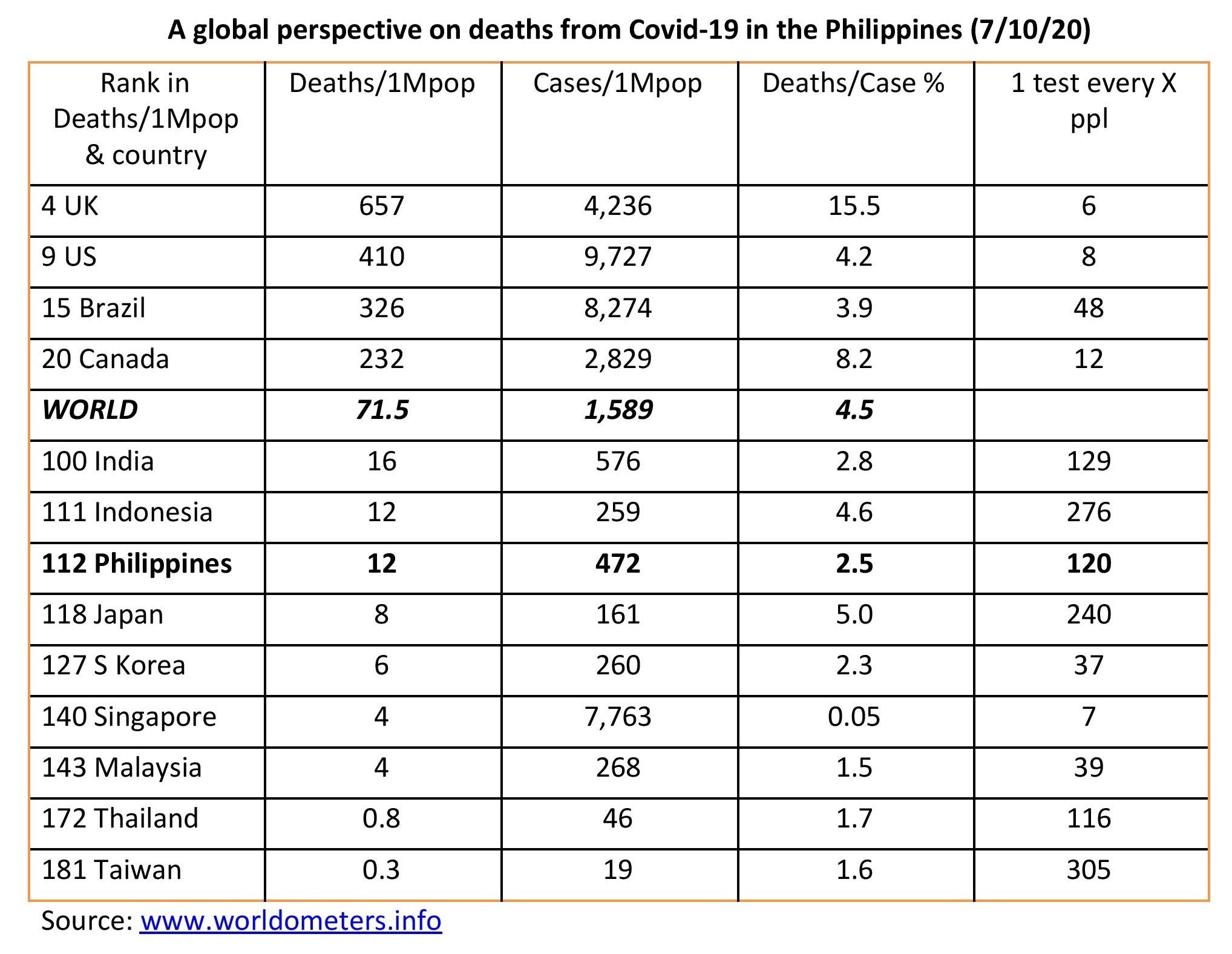 The table shows the cumulative number of COVID-19 deaths and number of COVID-19 cases per million of the population—abbreviated “1Mpop” by the source—of a selection of countries. The world average is 71.5 deaths, out of 1,589 cases, from a total of 184 countries with available data. Incidentally, there are no data on deaths from our neighbors Cambodia, Laos, Timor Leste, and Vietnam, or else I would have included them.

Note that the Philippine rate of 2.5 deaths per 100 cases is also much better than the world average. It is much lower than the rates in Japan and Indonesia, slightly lower than that of India, and almost as low as that of South Korea. (The reason that Japan and South Korea have fewer deaths per 1Mpop is because they have fewer cases.) It is clearly not as low as the deaths per 100 cases in Singapore, Malaysia, Thailand, and Taiwan. With deaths viewed relative to population, rather than in absolute change in time, the Philippines compares more favorably to its neighbors.

The last column in the table, for reference, is the number of people in the country, relative to the number of tests done there (for example, one test for every 8 Americans). Despite the huge disparity in testing between South Korea and the Philippines, the deaths per 100 cases are almost the same in the two countries. Note also that Taiwan’s low death rate cannot be due to its rate of testing.