Preventing genocide should be the interest of Asean | Inquirer Opinion

Preventing genocide should be the interest of Asean 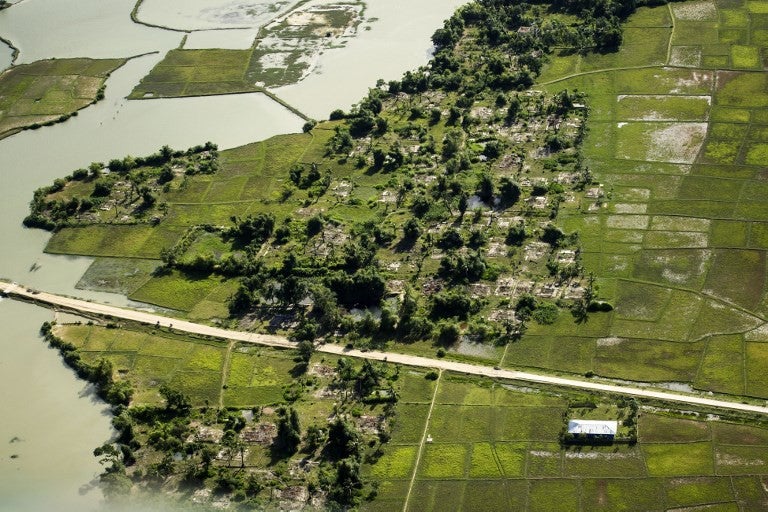 A burnt villages is pictured from a Myanmar military helicopter providing a tour for British foreign minister over Maungdaw, Rakhine state, on September 20, 2018. British foreign minister Jeremy Hunt’s busy two-day visit comes the same week UN investigators released a damning and meticulous report detailing why six Myanmar generals should be prosecuted for genocide against the Rohingya Muslim minority, who were chased out of Rakhine state after the Myanmar military launched a brutal crackdown in August 2017. AFP/Ye Aung THU / POOL via The Jakarta Post/Asia News Network

JAKARTA — On Jan. 23, 2020, 17 judges at the International Court of Justice (ICJ) voted unanimously to order Myanmar to take all measures to prevent genocide against the Rohingya population residing in Rakhine state. The court also ordered Myanmar to submit a report on the implementation of the decision within four months and thereafter every six months.

On May 22, one day ahead of the deadline, Myanmar submitted the report to the ICJ. By submitting the report, Myanmar signaled its willingness to comply with the genocide convention and cooperate with the court. Myanmar also set a new standard on a similar case, as historically many states have failed to comply with the provisional measures ordered by the ICJ, for example, Serbia and Uganda.

Initially, doubts lingered as to whether Myanmar would comply with the system. One official from Myanmar had denounced the court decision and portrayed it as a “distorted picture of the situation” (BBC, Jan. 23). Furthermore, there is a crack in the system, as it has no enforcement mechanism, even though the measures imposed by the court are binding and not subject to appeal. In addition, there is a lack of incentive for the state to comply with the measures.

It is unclear if the public will have access to the report.

However, I notice that, on April 8, the Office of the President issued two directives related to the compliance with the Genocide Convention. Directive No. 1/2020 orders government officials in Myanmar to refrain from committing any act of genocide, and Directive No. 2/2020 prohibits the officials from destroying or removing evidence of genocidal acts.

Moreover, as reported by RFA on May 5, the Myanmar government also released a directive in April requesting all civil servants to stop using or engaging in hate speech or inciting violence on social media.

These measures signify a change in the country, but civil society groups in Yangon opine the government only pays lip-service so as to reduce international pressure. In a webinar on May 20, Wai Wai Nu, a Rohingya activist, said there had been no meaningful measures to prevent genocide in the last four months.

In fact, the joint report of eight Rohingya organizations published in mid-May indicated that Rohingya in Northern Rakhine continued to live in fear of pressure, arrest, shooting, killing and torture by the security forces.

While complying with the court’s order is a promising development, it is still a long way to go to have human rights of Rohingya fulfilled. Preventing genocide against protected groups, including the Rohingya, should be the priority of Myanmar.

The Genocide Convention includes a dual state obligation: to prevent and punish genocide as a crime. They are distinct but interrelated obligations, in the sense that effective prevention measures will eliminate the need for punishment and effective punishment could deter individuals or groups from committing it.

There are, at least, three stages of prevention to pursue, namely before the violence happens, during the outbreak of violence, and after the violence.

Measures to prevent genocide should aim at protecting a society from the risks of genocide. Accordingly, it requires an understanding of the primary causes and an analysis of why, how and where genocide is committed.

Therefore, restoring the Rohingya identity is key in this stage of prevention. This can be done by repealing discriminatory race and religion laws, recognizing their right to citizenship, abolishing ethnic segregation that amounts to social fragmentation in the society and conducting programs such as economic empowerment for Rohingya women, interfaith dialogue and human rights education, to name a few.

Prevention efforts during the violence aim at deterring its escalation and stop the spread of its negative impacts. They are real-time efforts and immediate in character to slow, limit or terminate mass violence, such as exposing, isolating and punishing perpetrators and their enablers as well as providing legal protection to Rohingya people.

Meanwhile, prevention measures after the violence are aimed at avoiding it from happening again. The initiatives, such as integrating genocide prevention in the school curriculum, working with the community to promote social inclusion, establishing memorialization and forming a transitional justice system, are important to build underlying structures of societal and state durability related to good governance. They also can help in providing a fair interpretation and transmission of conflict history and resilient economic conditions.

Preventing genocide should be the concern of all Asean member states. Seven Asean states have ratified the Genocide Convention. The Asean Intergovernmental Commission on Human Rights should find interest in the measures of preventing genocide in the region. That would not only contribute to peace-building efforts but also to improving the quality of life of the people, protect human rights and reinforce of state sovereignty.

Normatively, two documents are relevant to the prevention of genocide: the Asean Human Rights Declaration (2012) and the Asean Declaration on Culture of Prevention for a Peaceful, Inclusive, Resilient, Healthy and Harmonious Society (2017) that will guide the path toward an Asean region free from genocide.

Finally, as they do not make headlines, prevention measures are often underappreciated, but they are exactly what prevents the worst of headlines from being made.

Preventing genocide is a process, not an event.

The writer is representative of Indonesia to the Asean Intergovernmental Commission on Human Rights for 2019-2021.

Read Next
Editorial cartoon, June 21, 2020
EDITORS' PICK
Is it safe to talk politics again at family gatherings? ‘The Reconciliation Dinner’ shows us what that’s like
House energy committee chair Arroyo bats for cheap electricity
vivo’s coming to town to grant wishes with more holiday promos
EDITORIAL: To a bike-friendly future
The Best Tech Gifts For The 2022 Holidays
Pagasa: Warm, sunny Sunday in most parts of PH
MOST READ
LOOK: Vhong Navarro transferred to BJMP detention facility in Taguig
The Elephant Man in the Senate
Posh village as ‘shabu’ haven
LOOK: Zanjoe Marudo bonds with Ria Atayde, her family
Don't miss out on the latest news and information.