The growth rate in COVID-19 deaths

The Twitter advocacy of epidemiologist Edsel Salvana has riled a lot of already angry or already anxious people. He has been credibly accused of condescension — a discourtesy or an insult in the real world but a high crime on social media; he has been widely criticized for a lack of intellectual humility  —an occupational hazard for smart people but an outrage in the participative forums of social media; he has been legitimately described, by the journalist Atom Araullo in a controversial exchange, as obfuscating the issue: in their case, whether the number of tests recorded by the Department of Health refer to number of individuals tested. (The doctor’s point, of referencing the number of specific tests conducted, not the number of individuals tested, still could not answer Araullo’s larger point, that the Philippines is behind its Southeast Asian neighbors in testing.)But I should also say that his continued willingness to respond to answers, arguments, or even innuendo on Twitter shows that he is continuing to engage a public that he might have treated more carefully in the beginning; his apology to Araullo and his repeated intent to “move on” suggest that he may yet be open to other points of view.

I do not wish to add to the piling on. I only want to point out that even if he professes to do everything by the light of reason, it is inevitable that he takes positions that are not in fact based on reason but on prior disposition, intuition, or bias.

For instance, his insistence that the Department of Health cannot be criticized, because to do so would be to dishonor the gallant work of our health care workers, is not in fact a reasonable position. Let this tweet, one of several he posted, stand in for the others: “DOH is a bureaucracy and whenever the institution is attacked, the whole rank and file suffers. Remember dengvaxia?”

We understand the impulse to protect the people one works with, or consults for, but this stance is pre-scientific. It is also undemocratic. 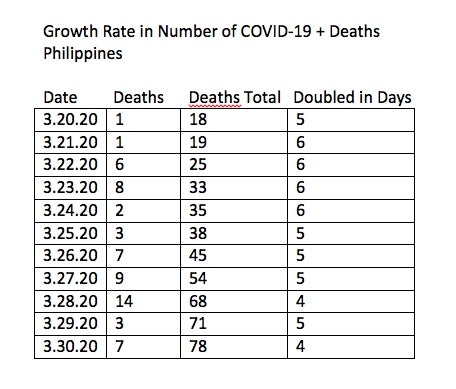 In a democracy, even in a democracy suffering through a health emergency, valid criticism cannot be invalidated because it hurts feelings or dampens morale.

And in fact, it is possible to criticize the institution itself or its leadership and yet praise individual members. For instance, I used to think highly of Dr. Francisco Duque III as one of the brighter stars in the small constellation of technocrats trained by our last technocrat-president, Gloria Arroyo. Now I see that he is failing in the task of overseeing the Department of Health in its severest emergency. He is slow to decide, at a time when quick decisions (rather like a bureaucratic triage) are needed; he is frustratingly political, always afraid of China’s shadow; and he is obviously not on top of the situation. On March 26, for instance, he called the nation’s attention to the number of doctors already killed on the COVID-19 frontline. But on the very day that the Philippine Medical Association named the nine doctors killed, Duque only mentions six. Isn’t the secretary of health himself updated? (Now THAT is an affront to the medical frontliners, hurting feelings and dampening morale.)

On the other hand, there is the professional, highly competent Dr. Maria Rosario Vergeire, department undersecretary and spokesperson. That she continues to be highly regarded, despite being the bearer of official justifications for unpopular decisions, suggests that competence and integrity still can cut through the information clutter.

Besides, when the DOH issued a call for volunteers and unthinkingly offered a mere P500 daily allowance, the criticism it received forced it to recalibrate its original offer. Surely that is a good thing, and possible only because the general pool of nonexperts — that is to say, ordinary citizens — criticized the bureaucracy.

Now that the numbers of COVID-19 tests have risen—despite earlier concerns about the reliability of the test kits donated by China—we can expect a rapid increase in the number of confirmed cases. What should we focus on, what should be the key metric?

Our World in Data suggests that we should keep particular track of the growth rate in the number of confirmed COVID-19 + deaths.

In the table here, we are looking at a rough estimate in how fast the number of deaths in the Philippines doubles, from 5 to 6 days. But two of the last three reports indicate that the rate might be picking up speed, to 4 days. What would this mean for the Philippines? We should hear from our experts—and ordinary citizens.