Why there won’t be another Edsa — for now 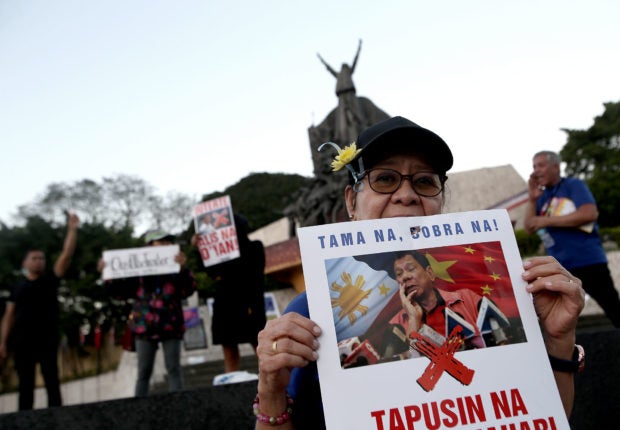 EDSA PROTEST Demonstrators call for the resignation of President Duterte during a rally at the People Power Monument in Quezon City, days before the commemoration of the Edsa uprising on Tuesday. —RICHARD A. REYES

For 14 years, beginning 1972, President Ferdinand Marcos ruled the Philippines like a dictator. But in just four days, from Feb. 22 to 25, 1986, his regime came tumbling down when Filipinos flocked in multitudes to Edsa to protect then Defense Minister Juan Ponce Enrile, who had dug in with 200 soldiers at Camp Aguinaldo after a plan to unseat Marcos fizzled out.

Today, Filipinos again find themselves living under a virtual dictatorship.

“How much longer can we take it?” asks a young chef, a member of a chat group, one of dozens of secret online discussion forums that sprang up as a reaction to President Duterte’s strongman rule.

The chef adds that if the current situation, which critics say is worse than the Marcos years, is not enough to stir people into action, “we are screwed.”

The opinion is no secret at all.

Every day, on Facebook and Twitter, Filipinos openly vent their ire on what seems to be a never-ending series of crooked decisions and oppressive acts by an administration whose leader — abetted by a subservient legislature and judiciary — is seen as an enemy aiming to sow fear and terror, and stifle dissent among the citizenry.

In the run-up to the 34th anniversary of Edsa 1—the people power revolt that preceded Edsa 2 or the January 2001 ousting of then President Joseph Estrada—two words sum up the flurry of social media rants of netizens: “Duterte Resign.”

Others are more blunt: “Oust Duterte.”

But not to demean the glorious four days in February 1986, when Filipinos from all walks of life called for Marcos to step down, another Edsa is not on the horizon. At least for now.

Here’s why, according to other members of Viber and Telegram chat groups:

“The people have become cynical.”

It’s a general observation that stemmed from public frustration over the failure of all presidents after Marcos to curb graft and corruption.

“The military won’t stage a coup just to get rid of Duterte,” says a netizen.

After seven attempts to bring down the Cory Aquino administration and two more to force the capitulation of the presidency of Gloria Macapagal-Arroyo, the Armed Forces of the Philippines is said to have reverted to its pre-Marcos reputation as a professional institution that follows its sworn duty, including the basic principle of following the chain of command — in this case, Mr. Duterte as Commander in Chief. “The situation has not reached a tipping point,” another netizen declares.

People feel they’re not ready to drop everything to go out in the streets again.

This, despite Mr. Duterte’s blatant disregard of human rights (more than 30,000 dead in the drug war based on police reports and deaths under investigation), unwillingness to enforce the country’s sove¬reignty over the West Philippine Sea, intolerance to critics (that led to the imprisonment of Sen. Leila de Lima and the impeachment of Chief Justice Lourdes Sereno) and open-door policy toward Philippine online gambling operators, among other accusations.

In short, the outpouring of anti-Duterte sentiments during both face-to-face gatherings and on social media has yet to translate into an Edsa-like scenario of a critical mass of warm bodies that will stop tanks and stay on the highway for days to help forge a “revolution.”

In the course of the exchange of views and opinions at meetings and in chat groups, a question pops up: “Do we real¬ly need another Edsa?”

Among the replies, this one stands out: “Edsa gave back the freedom we lost during martial law, so it’s not a question of whether we need to do another one now, but rather, what do we tell our kids when they ask about EJKs and asshole leaders: ‘Mom, Dad, what were you doing back then?’”

On a lighter note, many parents might say, “I cursed on Facebook, watched Netflix to keep my sanity and waited for the next scandal to blow up on the madman’s face.”