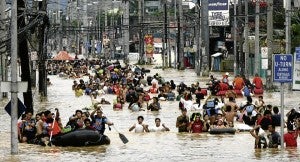 Floods are here to stay and there is nothing we can do to change it. Swamped practically on a yearly basis, metro residents are not oblivious to this fact. Rainfall will perennially submerge our streets and the best we can do is to prepare for and not aggravate the floods.

Metro Manila was devastated two years back by an abnormal downpour on Sept. 26. Delivering more than 40 centimeters of rain over a span of 12 hours, Tropical Storm “Ondoy” dumped the biggest amount of rainfall measured in recorded history of the country’s capital.

But freak nature was not the only culprit. Rapid and poorly planned urbanization compounds the problem. Rural folk migrate to Metro Manila, increasing its population from 4.9 million in 1975 to more than 11 million in 2007.

Through the years, humans slowly altered the city’s landscape. Where trees used to stand, concrete now extensively covers the land. Either poor planning or poor implementation of regulations promoted development in flood plains, with many residences, along with their garbage, obstructing key waterways.

Coastal areas and even small tributaries are reclaimed. All these contributed to the generation of massive floods, a natural disaster compounded by human activities.

To worsen the situation, many parts of Metro Manila are subsiding. Called ground subsidence, this is the phenomenon in which land sinks primarily because water that occupies the ground below is extracted by humans, faster than it is replenished by nature.

Leveling data from the National Mapping and Resource Information Authority (Namria) reveal areas in Metro Manila that sank 0.68 meter to 1.34 meters in 30 years (from 1979 to 2009).

A big part of groundwater subsidence in Camanava (Caloocan, Malabon, Navotas and Valenzuela) is mainly due to excessive groundwater pumping by fishpond operators, according to a study by Rodolfo and Siringanin 2006.

The probable consequences of continued sinking of the ground are dire, as dikes that serve to protect Camanava from sea water incursion may eventually be overtopped and bring forth sudden flooding.

Processed radar images taken from space from 2003 to 2009 showed blue areas of greater Metro Manila that sank. The ground subsidence “hot spots” in the northern part of the metropolis are Navotas, Malabon, Caloocan and Manila, and neighboring areas of Guiguinto, Marilao and Meycauayan in Bulacan.

In the south are the cities of Muntinlupa and Las Piñas in Metro Manila, Biñan in Laguna, and Dasmariñas City and the municipality of Rosario in Cavite.

Ground subsidence rates are up to 5.5 to 6 centimeters per year and are highest in Marilao, Meycauayan and Caloocan.

The satellite image of Metro Manila shows movement of the ground. (See map.) Blue areas correspond to sinking ground with the highest rates of subsidence at 5.5 cm per year. The image was processed by Narod Eco of the DOST project team.

The circular-shaped pattern of sinking grounds in Metro Manila indicates overpumping of groundwater as the primary cause of subsidence. Unless excessive groundwater withdrawal is curbed in these areas, subsidence will continue.

In 20 years, such rates mean that the ground surface will drop by more than a meter. This will aggravate flooding from heavy rainfall and constitute a coastal-dike breach hazard in areas near Manila Bay.

The probable causes of ground movement in Muntinlupa, Taguig and Pateros are still uncertain. The motion along the West Valley Fault, clearly seen in these areas in the deformation image of Metro Manila, may play an important role.

However, the contribution of tectonic activity in these areas to the ground-subsidence phenomenon is yet unknown and still being investigated.

A field inventory of wells was conducted by CEST Consultants Inc. for the National Water Resources Board (NWRB) in 2004 to determine the groundwater levels in greater Metro Manila. Complemented by information derived from reports, maps, secondary well data, climatic data and hydrologic records, the NWRB identified eight critical areas where too much lowering of the groundwater level takes place.

Many of the critical areas identified by the NWRB correspond to the subsidence “hot spots” of greater Metro Manila recognized in the processed satellite images. This is no surprise as the known consequence of heavy extraction of groundwater is ground subsidence.

Also notable is the absence of observed lowering of the ground surface in Quezon City, Makati, Mandaluyong and Pasay. Adobe, a more coherent rock compared with coastal sediments, underlies these areas and may be responsible for keeping the ground from sinking despite heavy groundwater extraction.

The adverse conditions in the critical areas necessitate close monitoring of further decline of groundwater levels. 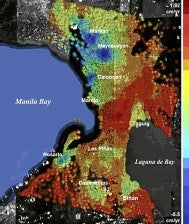 IMAGE of Metro Manila showing movement of the ground. Blue areas correspond to land sinking up to 5.5 centimeters a year. Red means the ground is moving upward or laterally toward the radar satellite. This image was processed by Narod Eco of the project team of the Department of Science and Technology. CONTRIBUTED IMAGE

To prevent deterioration of the aquifer, the NWRB strongly recommends the immediate development of alternative sources of water such as those drawn from rivers or lakes. A shift from groundwater to surface water from the Metropolitan Waterworks and Sewerage System (MWSS) and its concessionaires will give our ailing aquifers the badly needed respite.

To inhibit total depletion and deterioration of Metro Manila’s aquifers, the NWRB and its consultants further recommend artificial recharging with water from Laguna de Bay and excess surface water flows from Angat Dam.

Assessment of new applications for groundwater permits, enforcing design standards for new wells, requiring the submission of well data, identification of illegal wells and calculation and modeling of the groundwater budget are further recommendations for the effective management of Metro Manila’s groundwater resource.

Since the privatization of the MWSS in 1997, when concessions were awarded to Maynilad and Manila Water, the supply of surface water to Metro Manila residents has expanded.

Manila Water, the MWSS concessionaire for the east zone signed a memorandum of agreement with the provincial government of Bulacan for the Bulacan Water Supply Masterplan.

The project, which has three implementation phases, involves the construction of water-supply facilities, including a 190-million liters per day (mld) capacity raw-water aqueduct, treatment plants, reservoirs, pumping stations and primary lines, to cater to the demand of 1 million residents in the province.

The expected capacity of the filtration plant is 100 million liters per day (mld), enough to supply the water requirements of 105,000 residents in southern Metro Manila.

There are many other facility improvements being implemented by the MWSS and its concessionaires. Hopefully, they keep up with the ever rising demand of a rapidly growing urban population.  To save our aquifers and prevent land subsidence, there should be enough surface water to supply not only the domestic demand, but also the requirements of industry, agriculture and aquaculture.

Implementing rules and regulations in the Water Code of the Philippines stipulate spacing for wells used to extract groundwater. Except for wells less than 30 meters deep, the distance between wells and allowed extraction rates are as follows: (See table.)

No new wells shall cause more than 2 meters of additional drawdown to any existing well;

The board shall prescribe the maximum pump size and horsepower in the water permit so that the rate of withdrawal shall not exceed that authorized;

Groundwater mining may be allowed provided that the life of the groundwater reservoir system is maintained for at least 50 years.

Penalties imposed for grave offenses that violate the rules include a fine of more than P800 but not exceeding P1,000 per day of violation and/or revocation of the water permit/grant of any other right to the use of water.

Clearly, groundwater in subsidence “hot spots” of Metro Manila is not yet effectively managed. Otherwise there would be no bowl-shaped decrease in the surface elevation observed in several places of the metropolis.

Mismanagement of the groundwater resource in Metro Manila may arise either because of poor implementation of the law or because of the rules themselves are inadequate. In both cases, something must be done if we are to mitigate disasters.

The attention brought by Ondoy, hopefully, can focus efforts on addressing the growing concern on flooding that is complicated by uncontrolled urbanization. Two years after Ondoy, many of our canals are still clogged with trash and the floodways are still constricted by illegal structures.

Sinking of land brought about by overpumping of groundwater is yet another man-made problem which worsens flooding.

Billions of pesos are spent on climate change research and people are quick to blame global warming for meteorologically related natural disasters. Although true, it is not the only reason for our ecological woes.

Extreme flooding has many more causes, including those which are more tangible and can be addressed readily with some discipline.

We can never tame nature but we can mitigate its adverse impact. If we expect to significantly reduce the damage of flood hazards, we should control our ways and live harmoniously with our environment, a difficult task considering the rapid and poorly planned urbanization of Metro Manila.

(Lagmay, Ph.D., is a professor at the National Institute of Geological Sciences, University of the Philippines. He conducts research on natural disasters and advocates the use of advanced science and technology to mitigate natural hazards. He is engaged in a Department of Science and Technology (DOST)-funded project to measure subcentimeter-level ground subsidence in the metropolis using satellite images. Coproject leaders in the DOST research are Fernando Siringan of the UP-MSI; Dr. Eric Paringit, director of the UP Department of Geodetic Engineering; Undersecretary Peter Tiangco, director of Namria; and Kelvin Rodolfo, visiting professor at Manila Observatory. DENR-MGB, Pagasa and the NWRB are collaborating agencies of the project.)

Rate of withdrawal in liters per second

Read Next
Editorial cartoon, September 25, 2011
EDITORS' PICK
Philippines’ COVID-19 cases accelerate to 18,638
Leveling up your ‘lutong bahay’ with the kitchen companion you never knew you needed
Someone from the Philippines can become $356 Million richer this Tuesday
Cherry Mobile teams up with Cloud Panda PH, launches online store
Duterte certifies as urgent anti-terror bill
‘Puno na lahat:’ Metro workers brave lack of public transport, rains on Day 1 of GCQ
MOST READ
‘If I had not been SolGen, I will make you eat your words,’ Calida tells Coco Martin
Duterte certifies as urgent anti-terror bill
5 car dealership outlets shutting down
Senate OKs bill authorizing president to postpone opening of classes beyond August
Don't miss out on the latest news and information.

Quarantine passes no longer required under GCQ, but curfew remains