‘Son of God’ in trouble 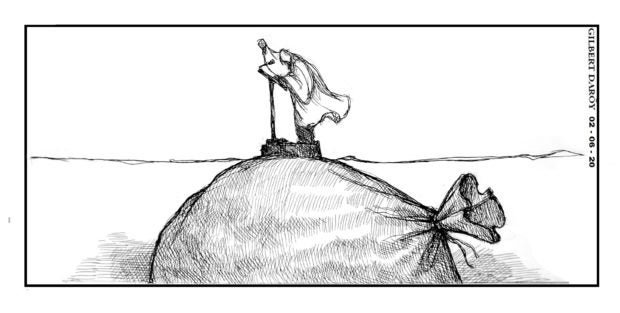 It reads like a plot off a TV crime series, except it’s real and based on accounts of disillusioned followers who had escaped and tipped off the United States’ Federal Bureau of Investigation (FBI) about the goings-on at the Christian sect known as the Kingdom of Jesus Christ (KOJC).

Last week, the FBI raided the KOJC church in Los Angeles in what it described was a human trafficking operation. Arrested were three of the church’s top officers, who were subsequently charged with conspiracy to commit immigration fraud.

The FBI said that since October 2013, the KOJC had been obtaining visas for its members under false pretenses. Once in the US, the members’ passports were taken away and they were forced to work as “volunteers,” soliciting donations on the streets supposedly for the church’s Children’s Joy Foundation, a nonprofit that claims to help impoverished children in the Philippines.

But the money instead ended up in the church’s coffers — to pay for luxury goods enjoyed by church leaders. Among the prized acquisitions were a Bentley, a bulletproof Cadillac Escalade, an Armani suit, and pieces of real estate. The church also owns a mansion in Calabasas, California.

Between 2014 and mid-2019, the LA-based KOJC collected close to $20 million from these donations, with followers-turned-workers made to meet changing daily quotas, according to the FBI. Workers who did well — called “assets” by the church — were forced into sham marriages or phony school enrollments so they could stay longer in the US.

Data from the US Citizenship and Immigration Service showed that 82 marriages were entered into by KOJC members and full-time solicitors between March 1999 and December 2019.

Those unable to meet their quota were punished — paddled or forced to spend three to five days in isolation in a walled section of the compound without food, listening to prerecorded sermons by church leaders. FBI special agent Anne Wetzel also quoted one victim as recounting how church leaders “shaved her head and made her wear an orange shirt with ‘SOS’ on the back, which stood for ‘Son of Satan.’”

Who’s behind this religious racket? The KOJC is headed by its founder Apollo Quiboloy, a man who calls himself a pastor and no less than the “appointed Son of God,” and who counts President Duterte as a long-time friend and adherent.

(On Quiboloy’s claim that he was able to stop the 6.6-magnitude earthquake that hit parts of Mindanao in October 2019, the President said: “I believe in Pastor Quiboloy. When he said ‘stop’, eh kung nag-stop, eh di what’s the trouble?”)

The charges of extravagance and wealth square well with what is known about Quiboloy and his church — that he has grown a business empire that includes, among others, a media outfit (Sonshine Media Network International), a school (Jose Maria College), and a mountain resort (Garden of Eden Restored); and that he has showered expensive gifts on Mr. Duterte, including the use of his private plane and chopper for the President’s campaign sorties, an SUV and choice real estate, with Mr. Duterte himself citing an Expedition vehicle that he said he was reluctant to accept because of fuel costs, relenting only because his daughter Sara had sulked.

In 2018, Quiboloy was briefly detained at Honolulu airport for a day after federal agents found $350,000 and gun parts from the private plane he was on. And in December 2019, a former member of his church filed a complaint of rape, qualified trafficking, and child abuse against the pastor and five others who, she claimed, had raped her in 2014 when she was only 17.

Against these disreputable controversies that have attracted scrutiny by investigators and crimebusters in the US government, Quiboloy insists he is simon-pure. In a statement to reporters in Davao City, Quiboloy’s lawyer Israelito Torreon denied the FBI charges and said that former members who had been disciplined for wrongdoing had retaliated by fabricating stories in a “grand conspiracy of lies… to put (Quiboloy) and the (church) as a whole into a quagmire of shame, blatant humiliation and defeat.”

Not surprisingly, despite the grave charges filed against the KOJC, not a word of reproof has been heard from the President or Malacañang against a church whose cult of personality around its flamboyant leader has put a number of Filipino citizens in the maws of the US legal system.

In previous instances, Mr. Duterte has harshly called out the Catholic Church, and even encouraged the robbing and killing of its bishops, for its alleged various shortcomings. But presidential friends, no matter how shady, are another thing. Quiboloy is apparently not only the “Son of God,” he is also the golden calf, untouchable and irreproachable.