Inflation in consumer prices is what the people really hate. A spike in the price of any essential consumer good or service quickly leads to public protests. Performance in controlling inflation has always been the worst subject in the survey-based Report Cards of the national administration in the past three decades. (The second-worst subject is performance in fighting corruption.)

The main difficulty with instituting a tax reform to generate significantly more revenue for the government is the popular misconception that it may worsen inflation. But putting more of the nation’s resources at the disposal of the government, through taxation, actually does the opposite: it suppresses inflation.

Placing new taxes on certain items will indeed raise the prices of these particular items; but they will not raise prices all across the board, which is what inflation means. Doing a good tax reform program involves rational and conscious decision-making about the specific sacrifices called for by the reform.

Given the very many roles it needs to play in national development, the Philippine government has always been severely underfunded. Government revenue is only 16 percent, which is only one-sixth, of the Gross Domestic Product (GDP) in the Philippines. On the other hand, it is at least one-fifth of GDP in Singapore and Thailand, one-fourth of GDP in Vietnam, and at least one-third of GDP in Korea and Japan (see table). 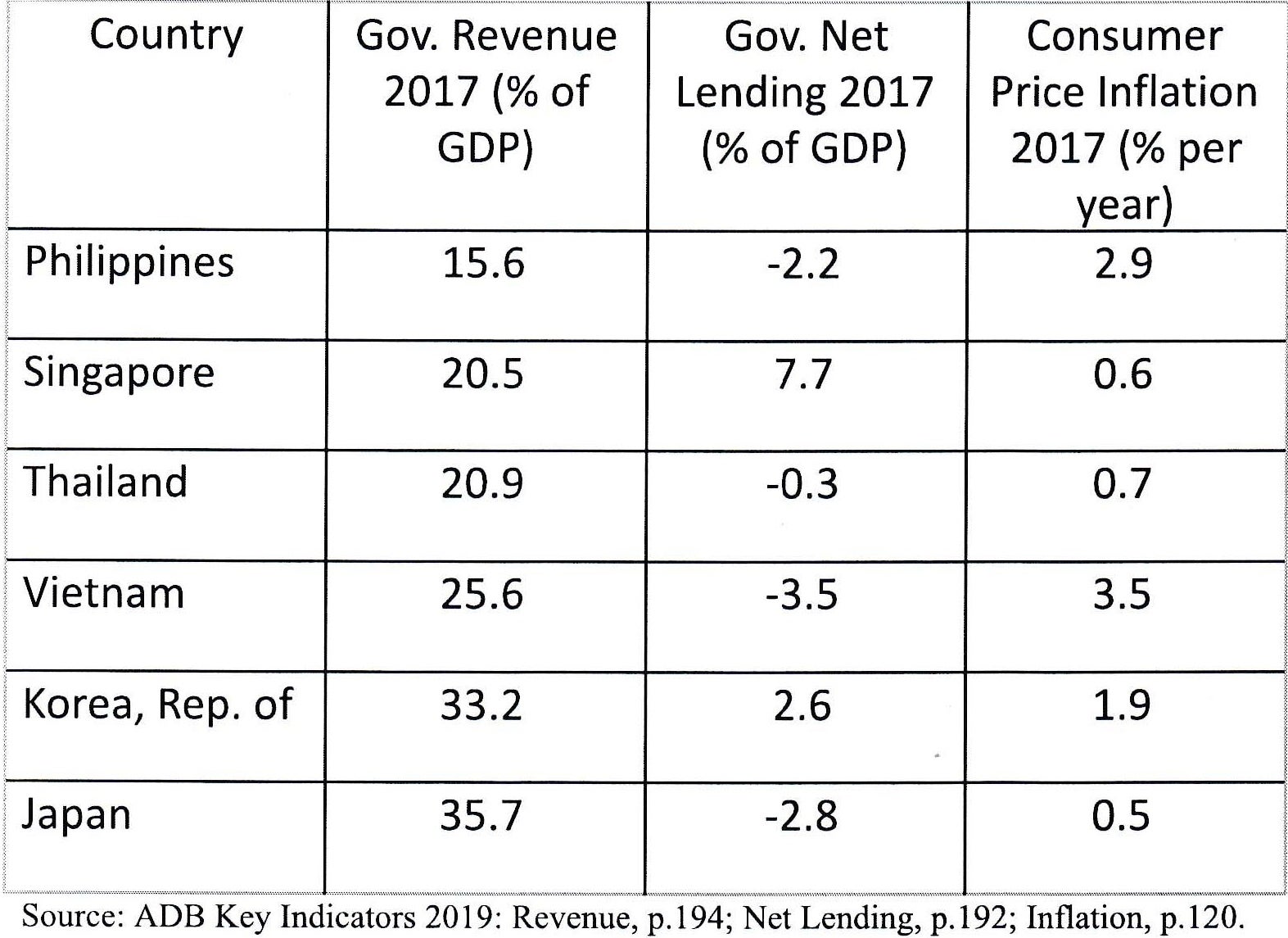 In any country, the major part of such revenue should be from taxation, and ideally from socially equitable forms of it. A government may finance its deficit by borrowing from various sources, domestic and/or foreign; but eventually the repayment of such borrowings must be sourced from future taxes paid by the people. Taxation is thus postponed, not eliminated.

All the country cases in the table have, at most, mild inflation. (For me, 4 percent annual inflation is the most that a people can be expected to tolerate.) That can be achieved firstly by saving—that is, refraining from consuming—and secondly by investing the savings in endeavors with high rates of return to society, like health, education, science and protection of the environment.

The worst thing for a government to do is to print money. Printing money, as was done here by the Japanese occupation government in World War II, would merely cause consumer prices to zoom. It would also be taxation, but in the form of hyperinflation, the most inequitable taxation of all.