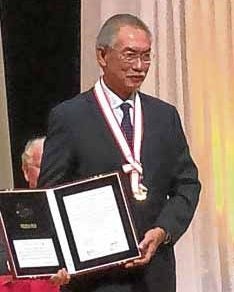 [Editor’s Note: This is the acceptance speech delivered in Fukuoka, Japan, on Tuesday by Inquirer columnist Randy David, grand prize winner of the 2019 Fukuoka Prize. The first Filipino to receive the grand prize, David was recognized for helping promote social justice in the Philippines by sharing his knowledge as a sociologist through teaching, academic research, TV programs and newspaper columns, and for encouraging academic and cultural exchange among Asian countries and deepening their mutual understanding. The Fukuoka Prize promotes respect and tolerance for the diversity of Asian cultures.]

I am grateful to the citizens of Fukuoka for choosing me to be among the recipients of the Fukuoka Prize on its 30th anniversary. I am filled with strong feelings that what we are honoring by these awards are not so much our personal achievements, but certain things that are timeless and enduring.

These are the values of friendship, cooperation, solidarity — and tolerance amid diversity. It is these ideals that drive us — citizens of different nations — to come together every year in this historic and cosmopolitan gateway city of Fukuoka to celebrate the creation, development and preservation of the best of Asia’s culture.

I am truly humbled to be counted as part of this community — a community that calmly asserts its voice above the noise of hostile confrontation that nowadays is too often recklessly made by people who make decisions in our name.

I was born a few months after the end of the Pacific war. I was lucky to be raised by parents who did not believe in passing on the scars of war to their offspring. I had heard stories of untold atrocities, brutality and betrayal committed during the war. But I was also made aware of the many kindnesses and acts of honor that individuals on both sides of the conflict were capable of giving in the direst of times.

The first time I brought my Japanese friend, the scholar and journalist, Yoshiyuki Tsurumi, to my parents’ home in Pampanga, my mother warmly welcomed him with a greeting in Nihongo. My mother was a good learner of languages. During the war years, this made a lot of difference in the way the Japanese soldiers treated her and her family.

Her simple gesture of greeting Tsurumi in his own language instantly put my visiting friend at ease, and seemed to erase, at that moment, all the painful memories of war. It allowed them to relate to one another simply as one human being to another.

In the nearly four decades that I have been coming to this beautiful country, I have made many friends among the Japanese people. A few of them came to my country to study and to do research. I have seen in these friendships the countless things we have come to admire in one another. Honor, keeping one’s word, mutual respect, generosity, compassion and service.

These transcendent values, which are found in every culture, give meaning to what we do in our everyday lives. They enable us to overcome the narcissism of minor differences that result from the accidents of race, ethnicity, religion and nationality.

In a time of great uncertainty and anxiety, when once more, there appears to be a sudden eruption of thoughtless threats by leaders riding on the wings of a backward-looking nationalism, I like to think it is these enduring values of human friendship and cooperation that will save human civilization from destruction.

Finally, if I may, I would like to accept this award in the name of all peace-loving Filipinos, and to humbly share it with my wife. She is not here with us tonight, but our children and grandchildren are.  My wife Karina passed away in May, a few weeks after she learned that I had been chosen to receive the Fukuoka Prize. This is for her.

Read Next
Editorial cartoon, September 11, 2019
EDITORS' PICK
PNP: Checkpoints back in MECQ areas
A gem of a residence in the new normal
Smart 5G goes live
Water remains our saving grace right now
Been there, done that but what’s the difference between MECQ and GCQ?
BREAKING: 3,226 latest COVID-19 cases bring PH’s total to 106,330
MOST READ
MECQ guidelines in infographics
MECQ in NCR, other areas: Mass transportation suspended, quarantine pass required anew
Doctors group to Duterte: ‘There was never a call for a revolt’
Want higher pay? Join the police force, Duterte tells nurses
Don't miss out on the latest news and information.