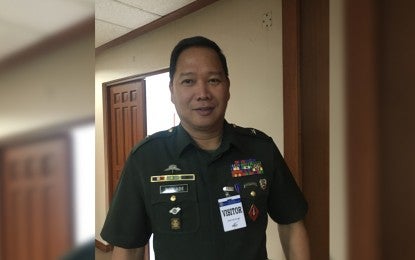 I am writing in response to Zarate’s tirades on me which was posted in INQUIRER.net.

Bayan Muna Party-list Rep. Carlos Zarate doesn’t know me at all. Who me? Aspiring for the post of the Chief of Staff of the Armed Forces of the Philippines (CSAFP)?

I am not a careerist like those who work simply to work their way up. I work and talk because its my sworn duty to country and people, and I don’t give a damn if I’m politically correct or not, because I’m a soldier. I’m not a politician who says one thing and does another. Check my record honorable Zarate, from my lieutenant days until today.

If I’m so concerned with my career, maybe I should be talking less and just be working on my promotions quietly.

I shouldn’t be going against the grain by not apprehending contraband goods in Maguindanao, which I know to be a “business” of our corrupt commanders then. That act caused the relief of two generals in Central Mindanao.

I shouldn’t be reporting about the illegal activities of my immediate commander in Zamboanga, which caused his relief. This was when I was a young LT and was then a member of RAM-SFP-YOU because of the reforms we desperately wanted. No junior officer would survive that if your moral fortitude is not that strong.

No, Mr. Zarate, I’m not that kind of officer who would rather sit in silence because my career may be placed in jeopardy. I spoke about suspending the ceasefire in Basilan and not all out war as your favorite paper reported about (to destroy me) in order to pursue the savages, because that’s the right thing to do, regardless of its dire consequences to my career.

It caused my relief with no less than President Aquino III announcing it; but I felt no remorse because it was part of my job to protect the Army, my organization, and my boss, the most bemedalled Commanding General of the Philippine Army (CGPA) we ever had. He was then barely three weeks short of retirement.

Visit me and I will show you how proud I was with my relief by displaying on my wall that banner story “PNoy sacks Army Spokesman.”

Lying and deceiving will never get you far in a noble profession like soldiery. You and your cohorts in the CPP-NPA-NDF terrorist group, on the other hand, have survived because of the lies and deceptions you peddled each day. These lies and duplicity have destroyed the lives and the future of so many students whose minds you have poisoned. Of late, many of them are from Senior High and are minors. Their poor parents can only cry and beg us to help recover their children before they go up to the mountains and join the NPA.

You have destroyed our institutions, corrupted our justice system, shooed away investments to pursue your National Democratic Revolution. But you intend to supplant this government with your “proletarian dictatorship” (see your detestable so-called CPP Constitution and Programs May 2017, Art 7 Sec 3). That’s your classic revolutionary dual tactics: to use democracy to destroy democracy. to join the church to destroy it. That’s what you did with the Rural Missionaries of the Philippines. You profess to defend human rights and IP culture but actually divided the Lumad families through your Salugpungan schools. Are these the things that Makabayan Bloc is proud of? What about you, Sir? Do you have anything to be proud of?

I wouldn’t dare talk against the Makabayan Bloc if it can jeopardize my confirmation in the Commission on Appointments. I heard your statement sounding like a vile threat in this regard. Officers before me have succumbed to your intimidation for so long, because many of them wanted to be CSAFP. Not me; and not this time. Your time is up!

There is a job to do and someone has to do it. We have the best chance to end insurgency with the National Task Force led by President Duterte himself. We will not let this chance pass. We will endeavor for this to succeed so that finally we can have true peace and form development to follow.

You are hurting with the truth hurled at you so you are getting personal.
Can’t you just take the challenge for a debate? Don’t leave Ibon Foundation and Karapatan behind after we clearly showed you some of the pieces of evidence we have about their being extensions of the CPP-NPA-NDF terrorist organization.

I began my career in the AFP when insurgency was at its peak in 1987. My only dream then, as it is today, is to see it end as I will be retiring a few years from now. A safe future for my kids is all I aspire for; to be Chief of Staff is farthest from my mind. But I bet that’s what you fear most because when that happens you will see yourself to extinction.