MANILA  — “When we talk about ‘new colonialism’,” Malaysian Prime Minister Mahathir Mohamad told me during an interview earlier this month, “what the Chinese are doing is not exactly that but it has the effect of diminishing the freedom of action of other countries that are owing too much money to China.”

I specifically raised the “new colonialism” issue because that’s the term the Malaysian maverick used, before his half-embarrassed Chinese guests, during a state visit to Beijing last year.

“If you borrow huge sums of money you [will eventually] come under the influence and direction of the lender,” Mahathir lamented. He warned against the dangers of “subservience” if poorer and smaller nations suffer diminished “capacity to repay” Chinese loans.

Mahathir was, of course, referring to the phenomenon of “debt trap”, which has a very specific definition. It essentially refers to a troubling fiscal situation, where the share of a nation’s foreign debt relative to the size of its economy (the debt-to-GDP ratio) far exceeds sustainable levels. 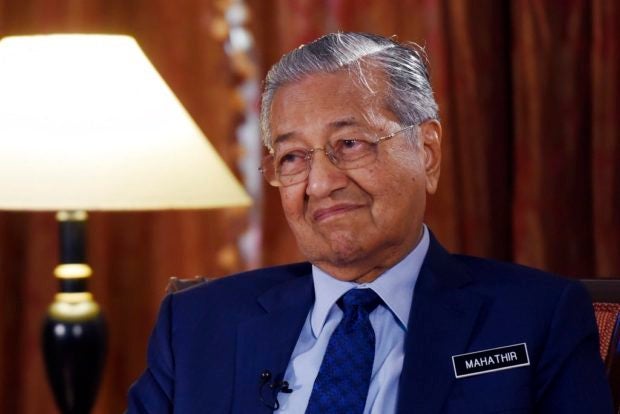 Malaysia’s Prime Minister Mahathir Mohamad listens during an interview with The Associated Press in Putrajaya, Malaysia, Monday, Aug. 13, 2018. Mahathir said he would seek to cancel multibillion-dollar Chinese-backed infrastructure projects that were signed by his predecessor as his government works to dig itself out of debt. AP FILE

In Sri Lanka, the country was so awash in debt that it had to surrender its prized Hambantota port to a Chinese company under a century-long debt-for-equity settlement. As for Tajikistan, debt concerns reportedly influenced its decision to give up 1,000 square kilometers of disputed land in Pamir Mountains.

A slew of other African and Latin American countries are also falling into the same trap. Venezuela may have sold out a generation’s worth of its precious oil under similar conditions. As far as the Philippines’ relationship with Chinese is concerned, however, ‘debt trap’ is NOT the real threat.

After all, our country has a healthy credit rating, a diversified pool of investors (actually Japan is leading the pack), and a relatively large economy, especially when one considers the dearth of Chinese infrastructure investments in the country.

Yet, what we are facing could be far more sinister: Undermining our sovereignty and sovereign rights in exchanges for minimal, shoddy Chinese investments. This is what I call the “Chinese Chimera,” namely forward-deploying geopolitical concessions in exchange for  false expectations of large-scale, quality investments from China.

In my interview with Mahathir earlier this month, I conversed with him on our geopolitical zeitgeist. At the astonishing age of 93, he was still impeccably sharp, lucid and forward-looking

At the heart of our discussion was his views on China, particularly its trillion-dollar Belt and Road Initiative (BRI), which aims to transform the global infrastructure landscape in China’s image.

When I asked whether he has any advice to other nations, the ever-smiling Malaysian leader sternly warned against “endangering your own freedom” due to “owing too much money to China.” The key word here, however, is “too much.”

And in fact, that is exactly what happened in the case of Malaysia, which attracted close to $100 billion in Chinese investments in the past decade or so. The upshot is ballooning debt, which reached a whopping $251 billion in recent years, in a country that has comparable GDP size to the Philippines.

But it was not only the scale of Chinese investments. Many of the big-ticket projects were negotiated with minimal transparency, questionable rationale, and under highly suspicious circumstances.

The situation got so bad that Mahathir decided to drop any pretense to political retirement and throw his hat into the ring at the age of 92! And, skillfully tapping into widespread public grievance against Chinese investments, he pulled off an astonishing electoral victory last year.

Back to the future

The most interesting thing to a Filipino observer like me, however, is that almost exactly the same thing happened in the Philippines a decade ago. Remember the $329 million Philippine National Broadband Network controversy (otherwise known as the NBN-ZTE project)?

For some reason, however, it seems we aren’t learning much from even our own contemporary history. To be fair, Chinese investments could be highly beneficial, but with a caveat.

As Mahathir told me, we should welcome investments from China, provided these are of high quality, focused on manufacturing and high-end services, negotiated under strict scrutiny, and provide jobs and opportunities for local workers and companies.

The reality, however, is that the Philippines was and will likely never be as attractive to Chinese investments as Malaysia, the resource-rich nation perched at the crossroads of the Malacca Straits, the South China Sea and the Indian Ocean.

Among 10 proposed big-ticket Chinese infrastructure projects, only one, so far, has cleared the preliminary stages of implementation. Nonetheless, some of our officials, including President Rodrigo Duterte, triumphantly discuss the prospect of a Chinese investment bonanza in exchange for our strategic acquiescence in the West Philippine Sea.

Fortunately, we aren’t also as small and vulnerable as Sri Lanka and Tajikistan to debt trap. But thanks to Justice Antonio Carpio’s expose, we now know that China seems to demand our national patrimony assets and sovereign territory as “collateral” for their loans.

There is nothing “standard” with this arrangement, since neither Japan nor any of our other major partners impose such conditions.

More crucially, unlike Sri Lanka, Tajikistan and other African and Latin America countries, the Philippines has ongoing and extensive territorial and maritime disputes with China. Thus, just agreeing to such loan payment terms is highly problematic.

It takes profound ignorance, perhaps even willful, to assume that the famed Chinese statecraft doesn’t connect its infrastructure investments to a broader geopolitical aim. And it’s here where we should take heed of Mahathir’s wisdom.

(Richard Heydarian is the author of, among others, “Asia’s New Battlefield: US, China & the Struggle for Western Pacific” and the forthcoming book “The Indo-Pacific: Trump, China & the New Global Struggle for Mastery. He writes a weekly column “Horizons” in the Philippine Daily Inquirer.)