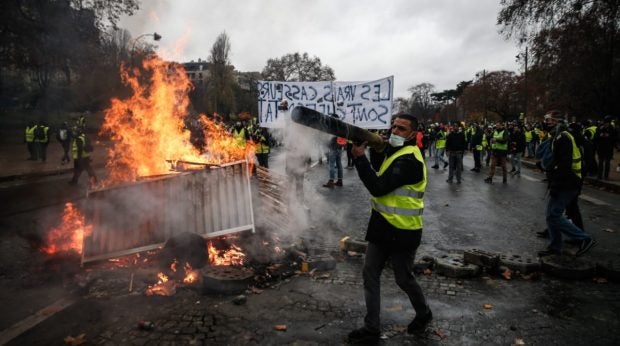 Protesters build a barricade during a protest of Yellow vests (Gilets jaunes) against rising oil prices and living costs, on December 1, 2018 in Paris. AFP via The Statesman/Asia News Network

NEW DELHI — Europe is on the boil as Paris is roiled by the worst violence in a decade with 100 people injured on Sunday and cars and buildings set on fire amidst the stirring strains of the national anthem, Le Marseillaise.

And yet the dispensation has not been suitably stirred. The protest against burgeoning fuel taxes has escalated to an anti-government movement. More the pity, therefore, that President Emmanuel Macron has responded to the crisis after the weekend convulsions had jolted the administration to its foundations.

It took a while for the President of France to instruct the Prime Minister to hold talks with the protest groups. The signal was dire, one that was emitted by the people several weeks ago; indeed the government could well have initiated the essay towards defusing the tension much earlier.

Indeed, Mr Macron is facing his biggest crisis after assuming office 18 months ago. Yet the government has seemingly stopped short of the drastic, arguably anxious not to precipitate the crisis. The Élysée Palace and senior ministers have ruled out the imposition of emergency after thousands of masked protesters from the gilets jaunes (fluorescent yellow jackets) fought running battles with riot police, torched cars, set fire to banks and houses, and burned makeshift barricades.

President Macron, who had said he would “never accept violence”, has instructed the Prime Minister, Édouard Philippe, to meet what he calls “legitimate protest groups” and opposition politicians this week in an effort to calm tensions and stop “professional” rioters from infiltrating street demonstrations. Visuals on the nature of the violence do point to the involvement of professionals. They may have cogent reasons to protest, but they have managed to make the waters murkier, thus posing a forbidding challenge to Macron.

Europe is in crisis and the ferment in France has lengthened the loop of convulsions ~ Brexit, the Russia-Ukraine conflict in the Sea of Azov et al. Macron flew back from the G20 summit in Argentina on Sunday and went directly to inspect the damage at the Arc de Triomphe.

Graffiti all over the base of the 19-century monument read: “We’ve chopped off heads for less than this” and “Topple the Bourgeoisie.” Scores of used tear gas canisters filled the gutters.

Near the Champs Élysées there were splashes of paint on buildings after protesters had paint-bombed police. Used bottles of eye-drops on the ground indicated that some protesters ~ many of whom wore ski-masks and breathing equipment ~ stood their ground despite the tear gas fired from rows of police behind shields.

By all accounts, it was a calculated offensive whose scale and intensity wasn’t quite anticipated by the authorities. No fewer than 33 of the 378 arrested are below the age of 18. France is deeply fractured. Gilets jaunes are just a symptom of a people’s movement. The country offers an affirmative answer to the query ~ Is Paris burning? Yes, indeed, it is.